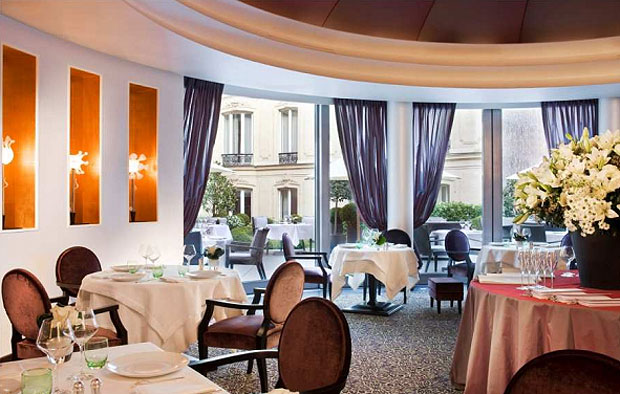 At the heart of Hôtel Fouquet’s Barrière, opening up onto the beautiful courtyard garden, the gastronomic Le Diane restaurant showcases timeless cuisine, offering a contemporary interpretation of the greatest classics of French gastronomy.

With its first star, the restaurant joins the ranks of other renowned venues included in the 2012 edition of the celebrated red guide book. A coveted distinction which is a happy addition to this year’s celebration of the 100th anniversary of the Lucien Barrière Hôtels & Casinos group, of which Hôtel Fouquet’s Barrière is a member.

An outstanding team
Jean-Yves Leuranguer, Head Chef of the Hôtel Fouquet’s Barrière and recipient of the distinguished  Meilleur Ouvrier de France award, and Christophe Schmitt, Deputy Chef of the restaurant Le Diane, heralded as Best New Chef of the year 2011 by Le Chef magazine, together demonstrate all their passion and expertise in the kitchen. The former shares his talent and mastery of the greatest classics of French gastronomy whilst the latter lends to these timeless recipes his own firmly modern vision. The duo creates contemporary fare collections in line with the Couture ambiance of the restaurant’s rotunda.

Time and again, they reveal the subtlety of true and authentic flavours, presented in the most elegant style. 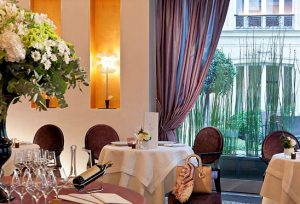 On the menu one is enticed to savour Sole prepared Meunière, truffled duchess potatoes, celery-butternut squash cakes or Label Rouge rack of lamb, candied aubergine, lamb sweet breads, thyme flavoured gravy : delicious dishes simply enhanced by the two Chef’s technique. To compose the sweet notes on the menu, Jean-Yves Leuranguer and Christophe Schmitt are joined by Head Pastry Chef Claude Ducrozet. The gourmet delights and desserts present simple, yet daring flavour associations, highlighted by exotic notes as illustrated on the menu by such offerings as : fresh mango with lime zest, crisp wafer, Pina Colada sorbet, Mediterranean mandarin soufflé, Corona sorbet, candied mandarins. The Diane culinary enjoyment is further enriched by the wine selections of the sommelier Wilfried Roux, whose cellar houses rare vintages of varied and original wines. The finishing touch is given by the discreet, efficient and attentive service, a trademark of the Barrière experience.

A feminine and intimist setting
A couture atmosphere, a refined decor adorned with iridescent shadows of mauve and pearly whites highlighted by touches of gold, an elegantly furnished bright rotunda…The world of Le Diane is at once both classic and contemporary, exceedingly tasteful and sophisticated. The carefully positioned floral and plant arrangements create a subtle link to the restaurant’s garden, opened as soon as the weather turns fine. Nestled in the golden leaf cornices, the 1930’s inspired white Murano glass flower lamps show off their unusual and surprising design.

The white linen tableclothes are dressed with delicate Limoges porcelain tableware complemented by Christofle silverware. The medallion shaped seat of the modern velvet chairs complete the French couture feeling of the venue and its cuisine.

Following an experience first as assistant, then sauté station chef, he leaves the Concorde Lafayette in May 1984, jumping at the opportunity to become second in command of the Sofitel Océania  kitchens in Brest.  He goes on to be appointed pantry station chef at La Palme d’Or, the restaurant in the Martinez hotel in Cannes created by Christian Willer, who according to Leuranguer: “remains, by far, the greatest palace executive chef that I’ve had the privilege to meet, along with Jean-Marie Gauthier, who was second in command at La Palme d’Or, before being appointed head chef at the Hôtel du Palais in Biarritz.” And it is in fact Jean-Marie Gauthier who will accompany Leuranguer in his successful bid to win the Meilleur Ouvrier de France competition in 1996, then accepting the position of Deputy Chef of the kitchens at the Martinez hotel. Six years on, he can fully showcase his talents at the Fouquet’s restaurant, where he is appointed Executive Chef.  This traditional restaurant becomes a palace hotel in 2006, thus giving him the task of orchestrating all the Hôtel Fouquet’s Barrière « pianos », at the head of a kitchen staff of 60 cooks and 17 pastry chefs, serving over 1000 meals a day. “I now feel it is my duty, as it should be, to pass on and share what I have learned.”

Born in Strasbourg, Christophe Schmitt begins his career as apprentice at the restaurant Au Crocodile in his hometown. He goes on to hold increasingly more responsible posts in a series of starred restaurants : first assistant chef at Le Rosenmeer, followed by that of assistant station chef at both la Maison Lameloise and Les Terrasses de Lyon, and finally by Station Chef at the prestigious Abbaye de la Buissière where alongside Olivier Elzer, Chrisophe continues to exemplify professionalism and rigour.  In 2007, he joins the team at Le Diane, the Hôtel Fouquet’s Barrière’s gourmet restaurant, as Station Chef. Jean-Yves Leuranguer, the Head Chef, quickly singles out his obvious talent and names him Deputy Chef for the restaurant. Christophe Schmitt was awarded the Trophy of Best New Chef of the year for 2011 at last September’s Trophy evening of Le Chef magazine.

Claude Ducrozet, Pastry Chef of the Hotel Fouquet’s Barrière, dedicates himself to surprising the palate with unusual and innovative associations of acidity and sweetness. Following his apprenticeship at the Gaget pastryshop of Châtillon, in the Ain region of France, Claude Ducrozet discovers the art of catering at Georges Blanc in 1989. This experience convinces him to pursue a career in gastronomy. He acquires a strong sense of discipline by working beside Jean-Marie Auboine at the Pyramide and perfects his pastry savoir-faire with Jean-André Charial at the Oustau de Beaumanière. His position as pastry chef at the Hotel Paradis (5* luxury hotel) in Mauritius gives him an opportunity to hone his management skills. Following his return to France, Claude Ducrozet puts all these talents to work first at the Hotel Martinez in Cannes and then at the Hotel Fouquet’s Barrière in Paris, where he has been Pastry Chef since 2010.