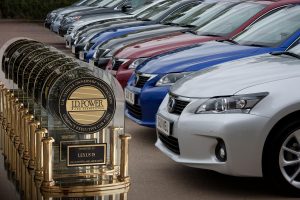 Lexus was once again named the highest ranked manufacturer in 2011 J.D. Power and Associates study

It is getting to be a habit, but a good one: for the 11th year running, Lexus has achieved the highest ranking in the annual J D  Power Survey Announced by What Car?  The results show that Lexus continues to lead the field, a position it has held from the first year it was eligible for consideration.

Jim Holder, What Car? Editor, said: “Lexus’s achievement is remarkable. Eleven years at the top of Britain’s most thorough customer survey is testament to its ability to build great cars and unstinting attention to customer service. The individual results for the IS and RX, with first and third highest overall satisfaction scores, should also give buyers of these cars unrivalled peace of mind.”

Richard Balshaw, Lexus Director, said: “We are delighted and immensely proud that Lexus has retained its number one position. It’s a great reward for the teams at our Lexus centres across the country,who work unstintingly to deliver the best possible service to our customers.

“Great products and great people are the key to success and we will continue to raise our standards to beyond the expectations of our customers. Our model range is also extending in new directions, notably with the full hybrid CT 200h which has had an immediate impact on the luxury hatchback market.”

The J D Power Survey 2011 canvassed the opinions of 16,840 owners of vehicles that were on average two years old.