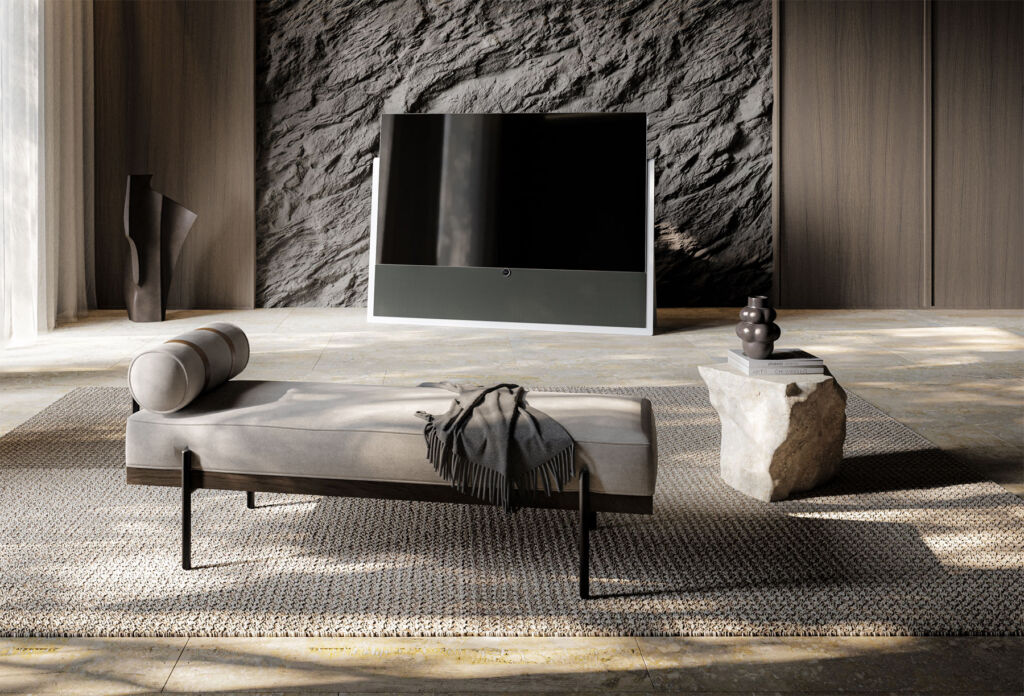 Sustainability is a vital component of modern-day manufacturing. Sadly, many businesses still need to work out how to incorporate it into their operations without harming their bottom lines. They should be following the example set by Loewe with its new Iconic TV, which is not only gorgeous to look at, it’s made from a recyclable material called Syno-Stone.

If one was to conduct a poll on the street, asking people to name a television brand, a name unlikely to be mentioned is Loewe. It’s understandable, as Loewe makes ultra-premium consumer electronics products with prices out of reach of many, but, as with many things in life, you get what you pay for.

Loewe is a German electronics company which was established nigh-on a century ago (1923) and since then has carved a niche out for itself at the cutting edge of the luxury consumer electronics sector. In addition to making some of the best TVs in the market, it is also responsible for bringing countless hours of joy over the decades to almost every person on the planet.

You may wonder how a company that many might not know of can be partly responsible for bringing happiness to everyone in the developed world. In 1931, the company, together with the scientist Manfred von Ardenne, introduced the world’s first fully electronic TV, which made its way into production. In 1951, Loewe amazed the world by producing the first mass-market TV and followed this up by launching the first TV with stereo sound and, in more recent times first smart TV in 1997.

Since its early days, Loewe has been at the forefront of television innovation, design and manufacturing. Today it is known for its gorgeous-looking, highly functional, modern and timeless products, and the Iconic models are an excellent example of this. 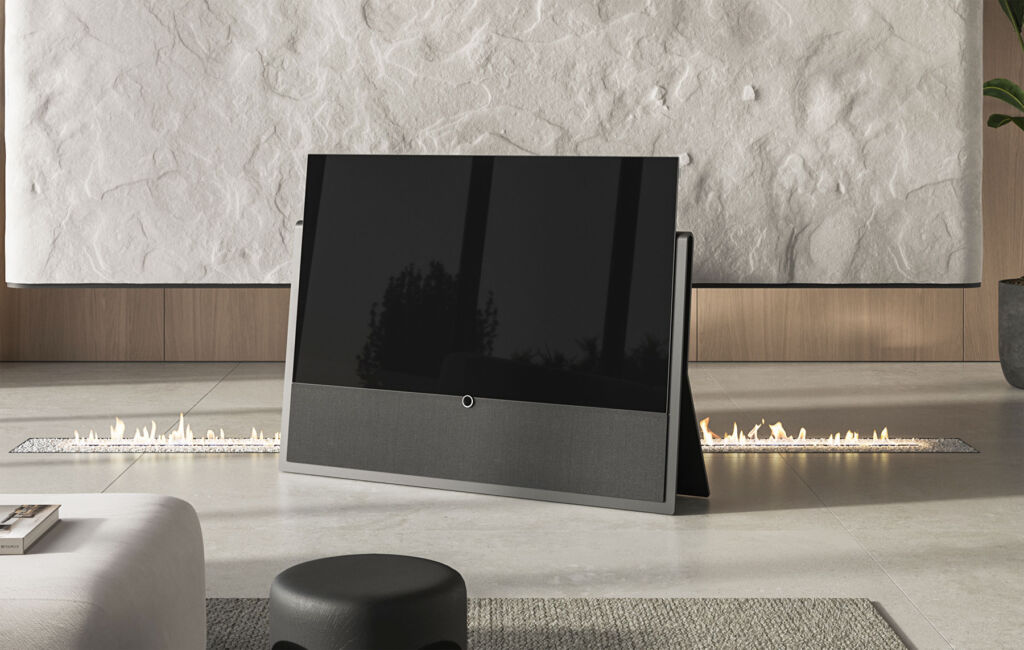 The Loewe Iconic range
Loewe Technology’s Iconic is yet another world first. It is a 4K television OLED television, which has been made using a solid surface mineral material called Syno-Stone. The Syno-Stone material was developed by the Kronach-based family-owned company Anders and looks similar to a polished concrete block. Without going into technical detail, it is made from locally sourced recycled materials, which can be recycled again and is said to be highly durable and hygienic.

The Iconic TV range is the result of decades of optimised algorithms. The ultra-high definition display produces an incredibly natural-looking picture, backed up by HLG (Hybrid Log Gamma), HDR10 and Dolby Vision™. These give the Iconic an impressive colour spectrum and high-contrast images, elevating the home viewing experience.

Currently, the Loewe Iconic is only available in 65″ and 55″ sizes and in two colours, Graphite Grey and Clay white. The individually calibrated televisions also benefit from a hidden sound bar, which has been hidden behind a fabric panel. 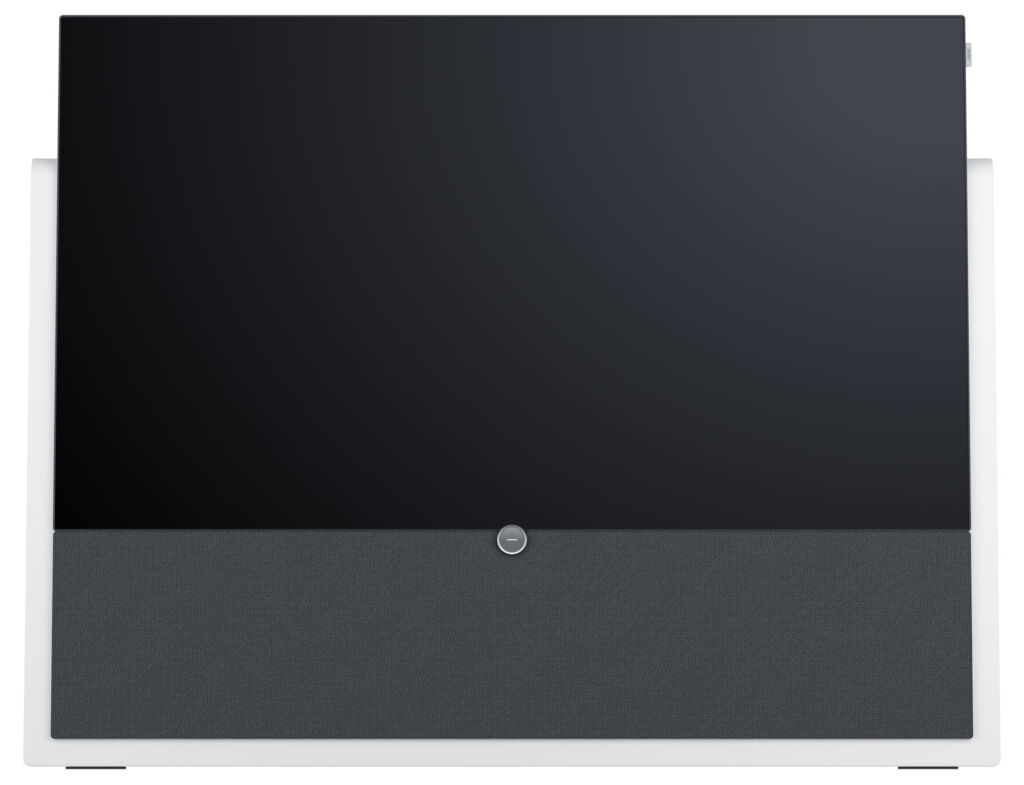 The Iconic’s soundbar is said to offer a natural audio experience with impressive, room-filling cinema sound and excellent speech clarity. The 360 watts soundbar is a 3.1 sound system which is expandable to 5.1. The Iconic supports Dolby Atmos, DTS:X, and Multiroom via Play-Fi, WDAL, and AVR adapters. In addition, the Iconic models can be wirelessly paired with two front and two rear speakers and a subwoofer (e.g. Loewe Klang mr1/3/5, Loewe Klang sub1).

Another nice feature of the Loewe Iconic package is it comes with the Loewe Premium Service, where a specialist Loewe dealer will come to your home to install and set it up. Iconic televisions are available from authorised dealers, and the RRP for the 65″ model is £7,999.00 and £6,499.00 for the 55″ model. For more information on the company, visit its website, www.loewe.tv.

About Loewe
As mentioned earlier in this piece, Loewe is known as the inventor of electronic televisions. The company employs two hundred people and is active in thirty-six countries, supported by an international sales network. It is a proud and passionate company, operating from its tradition-rich manufacturing plant and high-tech production facility in Kronach, Upper Franconia.