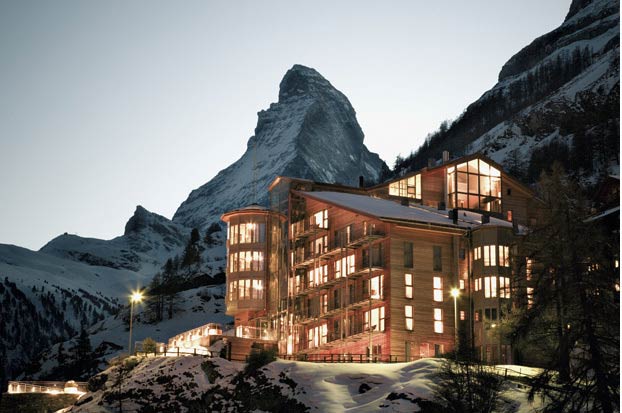 With the drop in temperatures, winter sport enthusiasts are itching to hit the slopes. What better way to experience the best the season has to offer than with these six Design Hotels™ members, from the subarctic wilderness of Sweden to the northern reaches of Japan, each exuding a cosmopolitan, urban flair while providing access to some of the world’s best ski trails.

In the premier Swedish ski destination Åre lies Copperhill Mountain Lodge. The hotel offers cutting-edge design from the acclaimed architect Peter Bohlin, whilst exuding an intimate, familiar ambience. In the alpine village of Adelboden is The Cambrian, a superlative version of the 21st century Swiss mountain getaway. The hotel prides itself on its use of natural, local materials in the design. In Verbier, Hotel Nevaï has become synonymous with luxury and alpine-chic. It is perfectly situated within walking distance of ski lifts, shopping areas, excellent restaurants and world famous après-ski and nightlife. Switzerland’s most famous celebrity, the Matterhorn, is just a stone’s throw away from The Omnia in Zermatt, which has quintessential views from each of the 30 guestrooms. The hotel’s design is a perfect fusion of the traditional American mountain lodge and modernist style. Extravagance, fashion-statements and contemporary luxury combine at the new Zhero – Ischgl/Kappl, opening this December in Austria’s Tyrol. Famed architect Matteo Thun contributed to the hotel’s design, where stone and wood meet custom-made Italian furnishings. Great things come in small packages, at least at Kimamaya Boutique Hotel in Niseko. The cosy mountain lodge by Hokkaido star architect Koichi Ishiguro features nine rooms and laid-back living areas, which fuse Japanese and Scandinavian design. 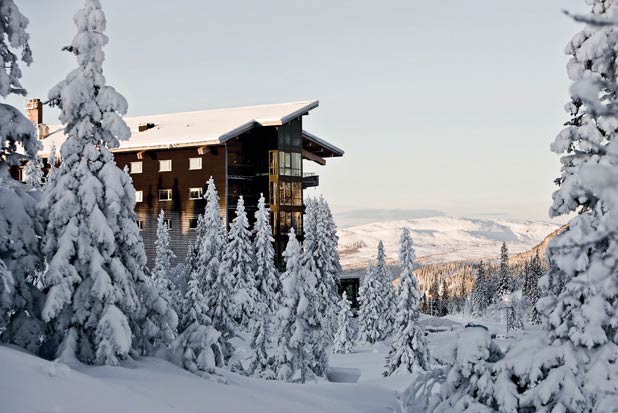 Nordic Wilderness in Åre
Resting on the top of Sweden’s picturesque Mount Förberget is Copperhill Mountain Lodge. Architect Peter Bohlin’s design and the familiarity of a mom-and-pop operation combine at this gem in Sweden’s snowy mountains. The hotel’s 112 earth-toned guestrooms feel luxurious and invitingly private. Åre is Scandinavia’s largest winter sport destination, and at Copperhill Mountain Lodge, guests will experience all the region has to offer, with complimentary guided activities such as snowshoeing, ski tours and morning meditation, as well as ski-in/ski-out access to the large piste system. After hitting the slopes, the hotel’s award winning spa is the perfect place to relax. The spa has recently added two chambres separées, featuring saunas, hot baths, showers and lounges. The hotel’s latest restaurant concept, Vaajese, has its namesake from the Sami word for “myth”. The daily changing tasting menu is based on the finest local ingredients and honours the traditional craft of Nordic cooking. And for spontaneous romantics: the hotel offers a special elopement wedding package. 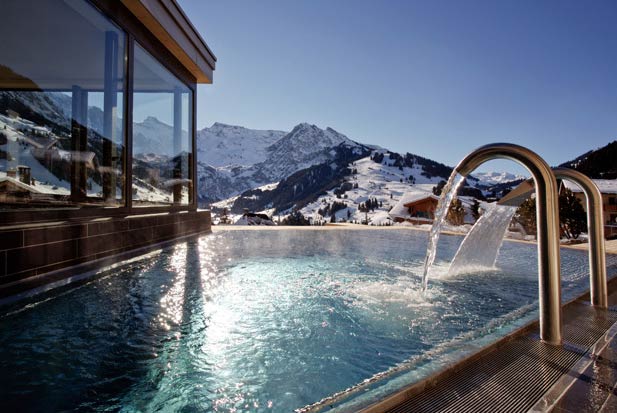 Swiss Precision in Adelboden
Guests will immediately feel the welcoming warmth at The Cambrian, located in the Swiss village of Adelboden. The hotel incorporates natural, local materials in its sleek, modern design, effortlessly reflecting the exterior, which adds to the purifying immensity of the mountains. Adelboden is one of Switzerland’s premier ski destinations, with over 200 kilometres of ski trails. The hotel’s 750 square metre spa, with its outdoor thermal pool deck, offers pristine views of the surrounding mountains. A highlight in the hotel is the serene winter garden extending out from the lobby, a favourite gathering spot for après-ski drinks and basking in the tender winter sun. Each piece in the puzzle, from the incredible service to the equally wonderful spa and recreational facilities, is part of the experience of staying at The Cambrian. 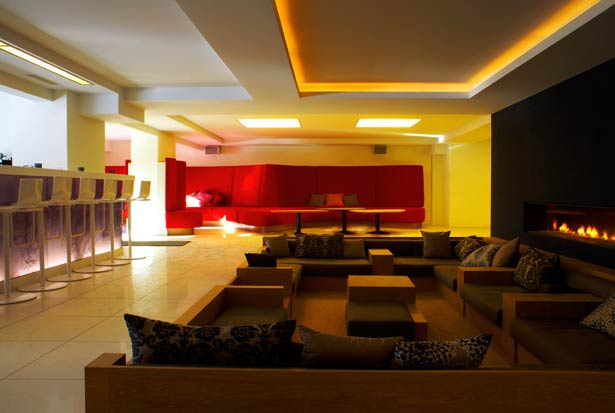 Après-Ski in Verbier
In the exclusive alpine destination of Verbier, Hotel Nevaï stands out as an icon for winter chic. Nevaï draws its name from the ancient Patois word for “snow”, which is used as a design motif throughout the structure, together with a subdued winter colour palette. Verbier features over 400 kilometres of ski trails and is traditionally one of Europe’s hottest destinations due to the thriving cultural and après-ski social life. Nevaï’s own The Farm Club is one of the time-honoured places to see and be seen in the region. The venue has become a legend in the world of après-ski, where European royalty, international celebrities and stars like Diana Ross and David Bowie have danced into the early hours. 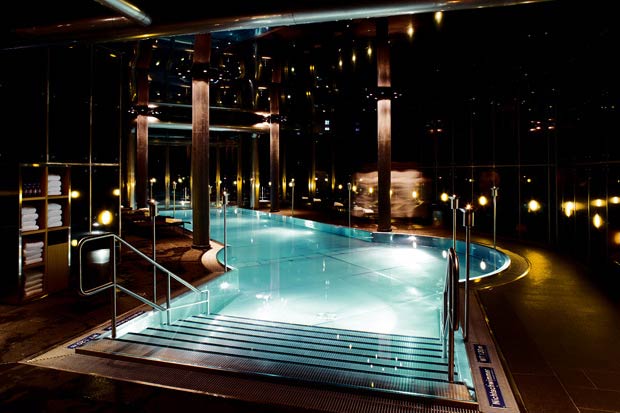 True Legends in Zermatt
High above the snow-laden roofs of Zermatt lies a modern hideaway, The Omnia. The mountain lodge sits serenely in the shadow of the legendary Matterhorn, arguably Switzerland’s most famous mountain. Architect Ali Tayar sought to fuse the elements of a cosy mountain lodge with functional, contemporary furnishings. Most of the guestrooms feature superlative views of the Matterhorn from private balconies. Zermatt has over 320 kilometres of trails open in the winter, and is a year-round ski destination, with 365 days of snow per year. The hotel’s Cavern – a breathtaking conference centre by day and lounge bar by night – sits over a sea of water in a man-made cave; the ideal retreat to let the day pass. 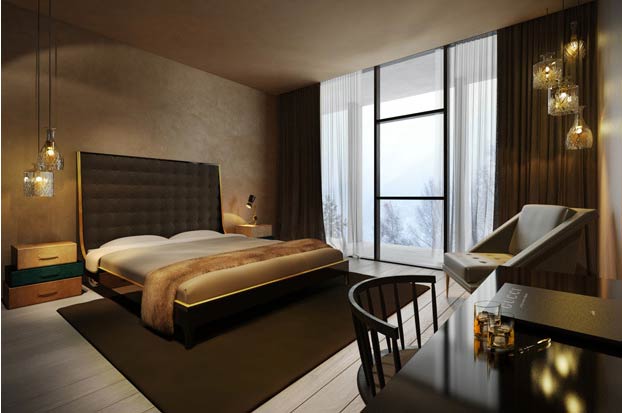 Contemporary Luxury in Kappl
Tyrolean tradition and innovative design blend seamlessly at Zhero – Ischgl/Kappl. Opening 12 December this year, the hotel is setting out to make a bold statement by combining fashion, design, luxury and comfort under one roof. Local materials have been employed in the design, such as stone, wood and fur, complemented perfectly with custom-made pieces from Italian designers like Minotti and Bottega Veneta. Zhero – Ischgl/Kappl is ideally situated between the ski destinations Kappl and Ischgl and offers guests a limousine shuttle service between locations. After hitting the slopes, guests can enjoy a treatment in the 750 square metre spa, take advantage of the in-house Gucci boutique or even some duty-free shopping in the nearby tax haven Samnaun. 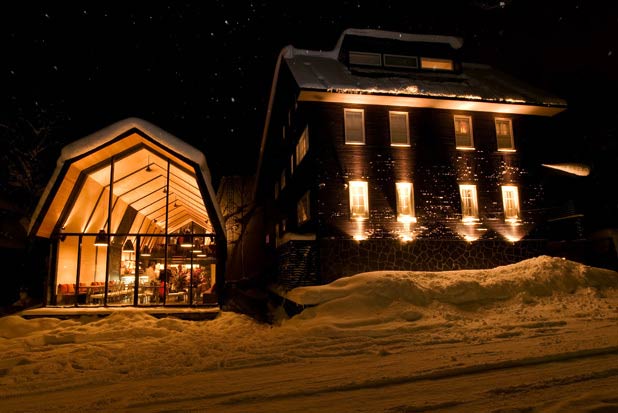 An Intimate Affair in Niseko
Located on Japan’s island of Hokkaido in the popular ski destination Niseko lies the quaint Kimamaya Boutique Hotel. With just nine rooms created by designer Andrew Bell, the hotel captures the essence of the mountainous atmosphere and combines it with a cosmopolitan flair. The core of the main lodge is the timber-floored Living Lounge, where guests can mix and mingle, curl up with a good book or sip on vintage wines from owner Nicolas Gontard’s own vineyard in France by a flickering fireplace. The interiors reflect the heritage of the original building, while combining elements of Scandinavian and Zen Japanese design.  Kimamaya is located in the bustling heart of the famous ski resort of Niseko, Gran Hirafu, featuring some of the best deep snow runs and off-piste skiing. At the spa, guests are pampered with Japanese massage techniques and a soak in a wooden or stone tub. And the lodge’s award-winning Barn restaurant serves French-inspired food and wine fare, a first in Niseko.