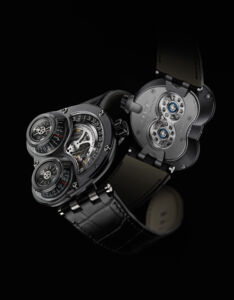 James Dean was a Hollywood Rebel Without a Cause; Billy Idol had a Rebel Yell; Star Wars had its Rebel Alliance; and now MB&F pokes the establishment firmly in its conservatively-focused eye with the HM3 ReBel.

Whereas James Dean was the epitome of movie star bad boy, MB&F is the wild child of haute horlogerie; the lone biker in a black leather jacket when everyone else is wearing grey suits and driving Volvos. And unlike Dean, the HM3 ReBel knows exactly what its cause is: horological anarchy!

ReBel: R for right (hand), B for Black (case). The black-coated MB&F HM3 ReBel is a distinctive, rock ‘n roll mirror-image of the HM3 designed to be worn on the right wrist, as a few individualists out there want to do.

And like all true rebels, nothing on the MB&F HM3 ReBel is quite as it first appears, especially when you take a closer look behind its nonchalantly cool façade. Under the HM3 ReBel’s open black leather jacket – or to be more precise, its black PVD-treated white gold case – charcoal-coloured movement plates and bridges form a darkened backdrop to the resplendent flash of the 22K rotor as it speeds by.

Despite its anarchistic appearance and unorthodox right-wrist architecture, the MB&F HM3 ReBel has a serious side. This dynamic, three-dimensional sculpture is a highly technical wristwatch as well as a statement of attitude. The MB&F HM3 ReBel’s twin cones ergonomically indicate the hours and minutes, with the hour cone capped by a day/night indicator. The top caps of the truncated cones are brazed (not glued) to ensure 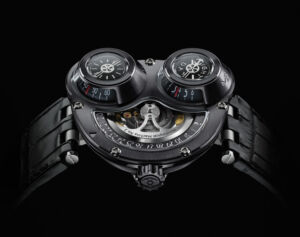 maximum water-resistance and the red “hands” of the hour and minute indicators are cut by laser to obtain the incredibly high precision/minimum mass ratio the design necessitates.White gold clover-head screws on top of the black case resemble rivets in an upmarket biker’s leather jacket, while the large, legible numbers of the over-sized date wheel around the rotor enable the date to be read off easily against a neat, engraved triangle on the case.

The rotor and oscillating balance on top provide a clue that the ReBel’s movement, featuring no less than 36 functional jewels and 304 components, is actually inverted. Turning the Machine over reveals the technical secret behind the powerful and superbly hand-finished engine: two large-diameter, high-tech ceramic bearings racing inside bright blue cages efficiently transmitting power up to the time indication cones and date wheel.