Blancpain has created unique series of four Métiers d’Art watches inspired by the supremely rich culture and history of the Middle Empire.

The four great beauties from Chinese antiquity, regarded as the most stunning women of their era, date respectively from the Spring and Autumn (722-481 BC), Three Kingdoms (220-280 AD), Western Han dynasty (206 BC-9 AD) and Tang dynasty (618-907 AD) periods. Above and beyond their sublime appearance, which was enough to amaze even nature, the four Chinese beauties forged a reputation through the influence they had on the rulers of their time, and, as a result, the history of China. Legend has it that three of them caused their kingdoms to weaken and all came to a mysterious end.

Blancpain has decided to interpret the tale of these emblematic figures from ancient China on a set of dials, using all the artistic techniques expertly practised in its Métiers d’Art workshops. It is in Le Brassus, in a country setting nestled in the heart of the Vallée de Joux, that Blancpain’s artisans perpetuate ancestral skills transmitted from generation to generation.

Be it champlevé enamel, engraving, shakudo, marquetry or enamel painting, each artistic craft is promoted on one piece of this special series, while all four watches feature a painted enamel beauty. 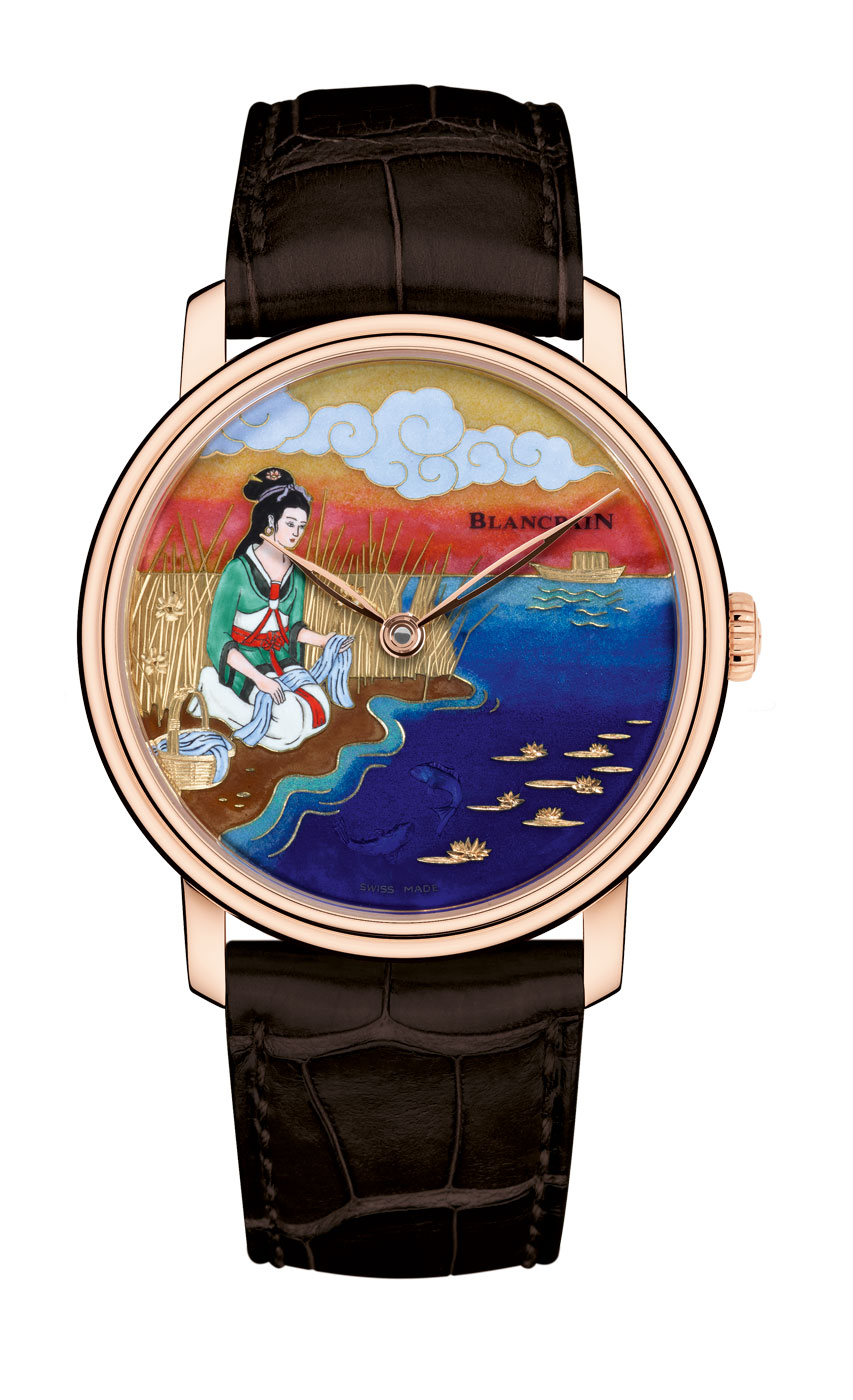 Xi Shi is the first of the four great Chinese beauties. She lived during the Spring and Autumn period. Born in a mountain village in the State of Yue (today is known as Zhejiang province), she was in the habit of washing her garments in a stream not far from where she lived. Captivated by her beauty, the fish in the water forgot how to swim.

To evoke this scene, Blancpain artisans focused particularly on the technique of Grand Feu champlevé enamel, of which the varying degrees of opacity and colours afford a wealth of possibilities and yield spectacular results. The solid gold motifs were especially patiently hand carved out of the dial base, before the enamel was applied inside the areas sculpted in the mass in order to create the colourful decoration. Applied with a brush in successive layers, the enamel was crafted using the so-called Grand Feu method, requiring glazing in the oven at temperatures of around 800 °C. Blancpain used translucent enamel to paint the stream in order to imitate the transparency of water. By playing on the slant of the watch, depending on light effects, the carp engraved on the dial appear beneath the enamel. 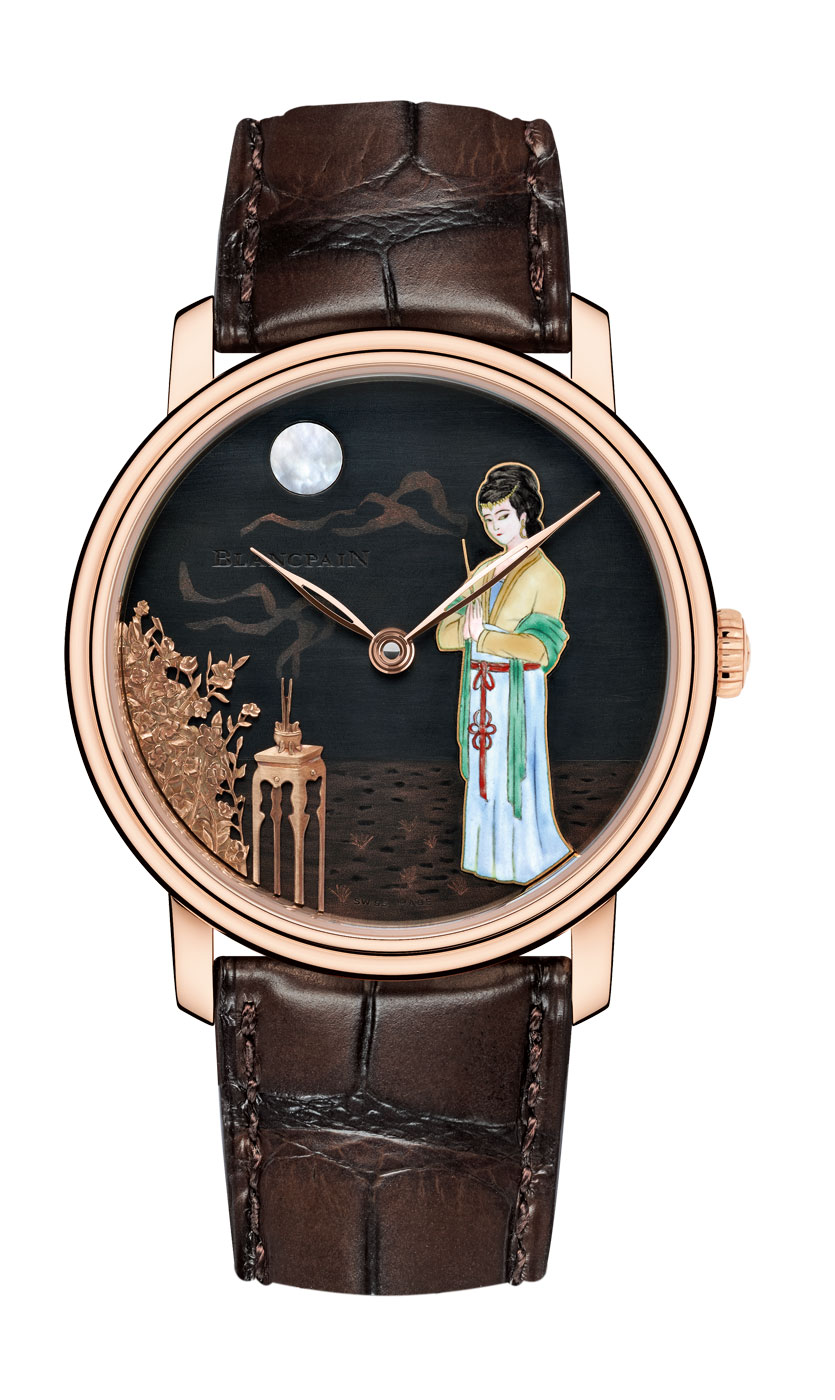 Unlike the other three beauties, Diao Chan was a fictitious character from the novel Romance of the Three Kingdoms, which retraces the key events of the end of the Eastern Han dynasty and the Three Kingdoms period. The most beautiful after Xi Shi, Diao Chan used her charms to cause the loss of a lord responsible for the death of her parents. Her beauty was so radiant she even surprised the moon which hid from her face.

The dial dedicated to Diao Chan combines a different set of exceptional skills, mainly demonstrating Blancpain’s expertise in shakudo and engraving. An alloy made of gold and copper, shakudo, which is used here for the base of the dial, has been immersed in a special bath, rokusho, in order to produce a dark patina – hovering between shades of brown, blue and black – that is reminiscent of dusk. Red and yellow gold inlays, engraved or enamelled in traditional fashion, have been applied in order to give a three-dimensional appearance to a Diao Chan who is meditating near an iridescent mother-of-pearl moon. 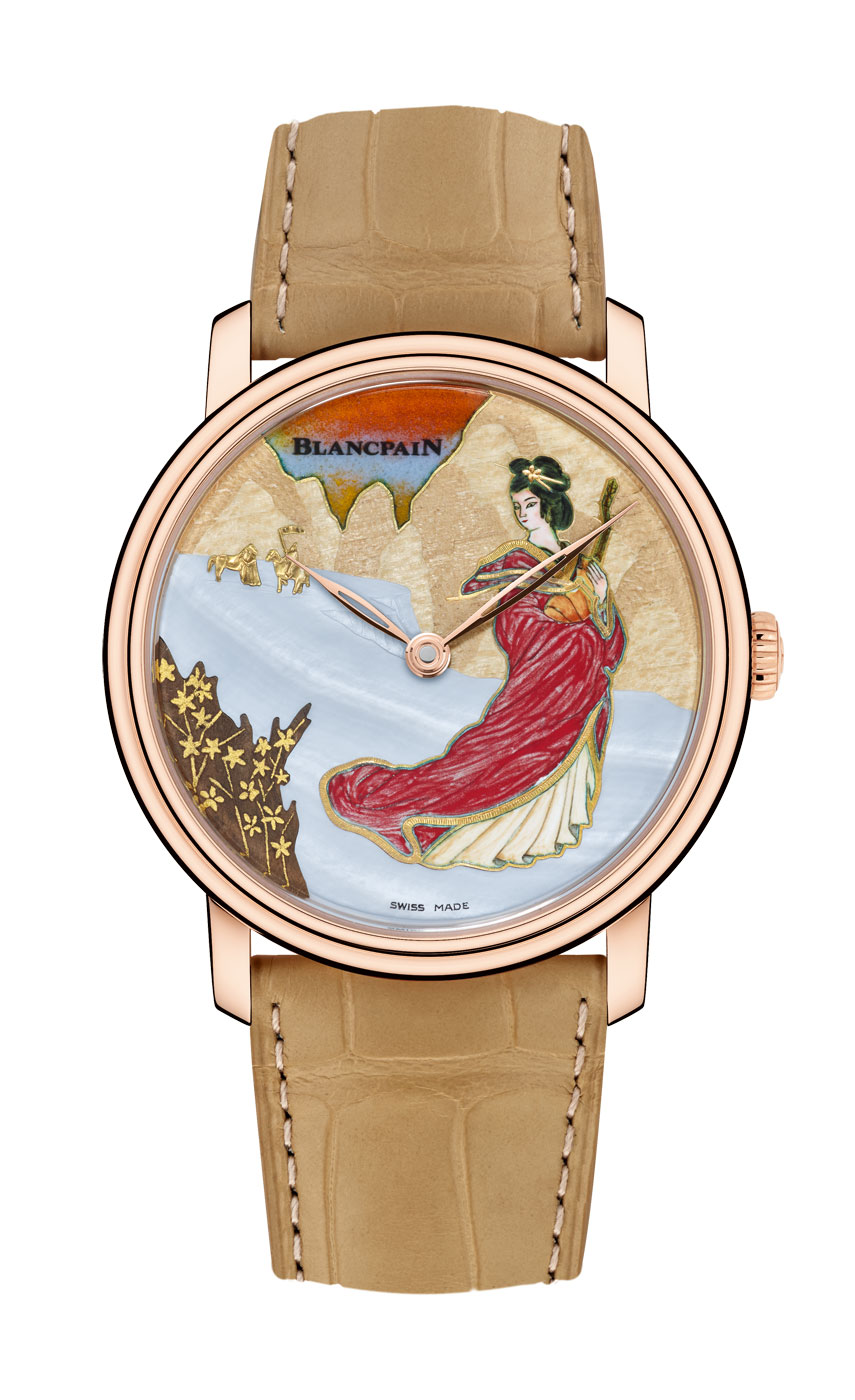 The third great beauty of ancient China, Wang Zhaojun, appears during the Western Han dynasty. She was part of the harem of Emperor Yuan and, with her consent, was given to the ruler of the Xiongnu Kingdom, Hu Hanye. It is said that her breathtaking looks caused birds to waver in full flight to the point of falling from the sky.

The piece devoted to Wang Zhaojun depicts the scene in which she is separated from her tribe. Blancpain artists have carefully recreated a snowy mountainous landscape on the gold dial using marquetry made of noble wood, combined with Grand Feu champlevé enamel and engraving on gold and mother-of-pearl. The different effects of the materials and colours thus achieved enhance the beauty and courage of this character, represented by her pipa in hand and clad in a majestic red cloak. 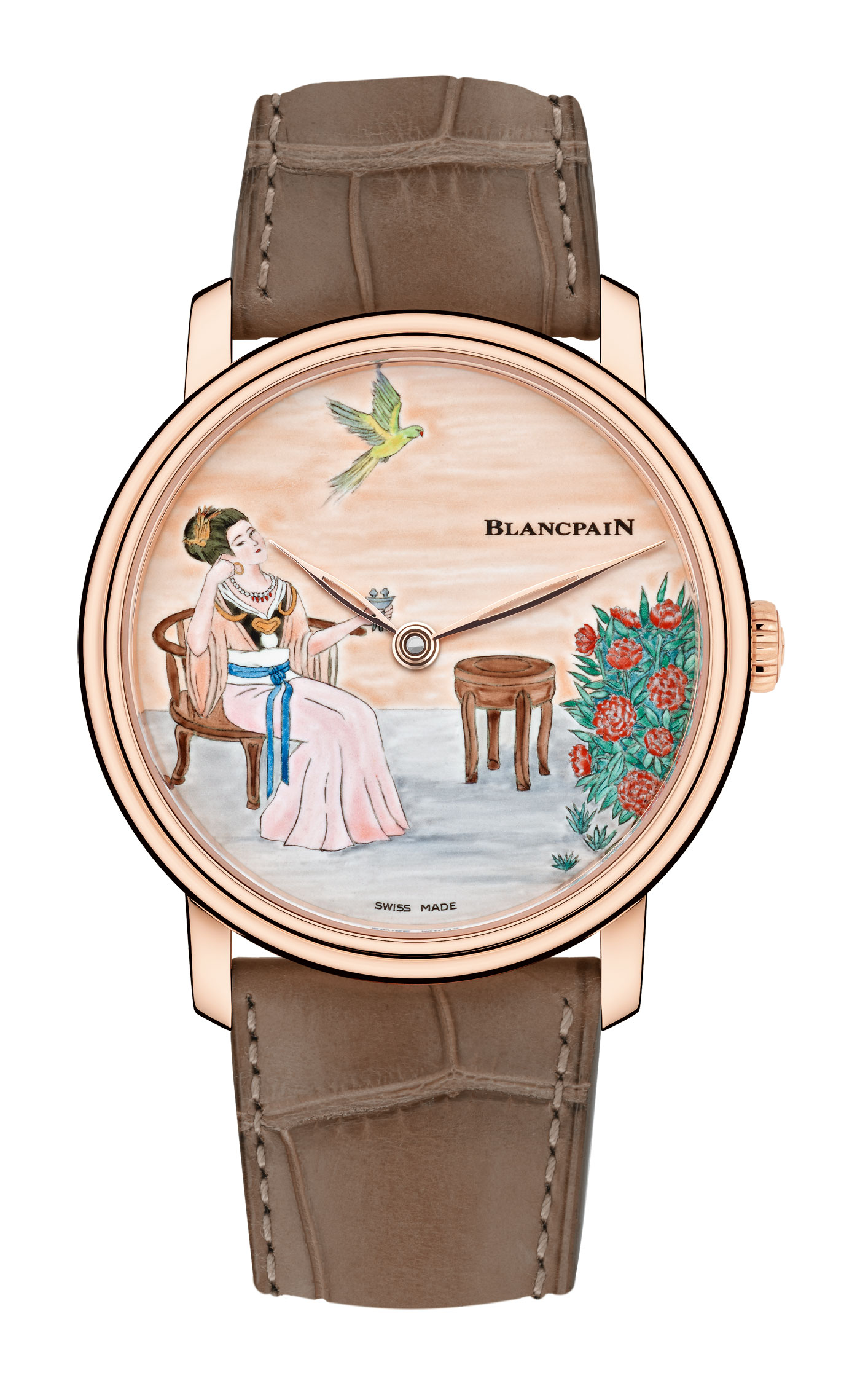 Yang Guifei was the concubine of the Emperor Xuanzhong from the Tang dynasty. She lived during a period marked by a certain open-mindedness and social peace. Not only was she an extraordinary beauty to the point that even the flowers were put to shame, but she also had a great talent for dancing and music, two inspiring disciplines.

Blancpain has painted the dial of the final piece in this special series with a depiction of a slightly inebriated Yang Guifei, in a charmingly whimsical pose. As each colour is applied in enamel, the painting has been subjected to multiple firings. This process involved many creative stages, starting with the preparation of the surface to be painted. In order to create a base for the painting, the gold dial was delicately coated in enamel layers on both sides to avoid distortion. It was then carefully polished to obtain a perfectly smooth, flat disk, ready to receive the coloured pigments.

The four pieces in the unique series in tribute to the great beauties of ancient China feature a 42mm red gold case, the ideal diameter for a decorated dial. These exquisite works of art are driven by Caliber 13R3A, a hand-wound movement reputed for its eight-day power reserve. Visible beneath a sapphire crystal case-back, it displays finishes just as meticulous as the dial decoration, such as a Côtes de Genève motif and hand-filed chamfering used to perfect the bridges.