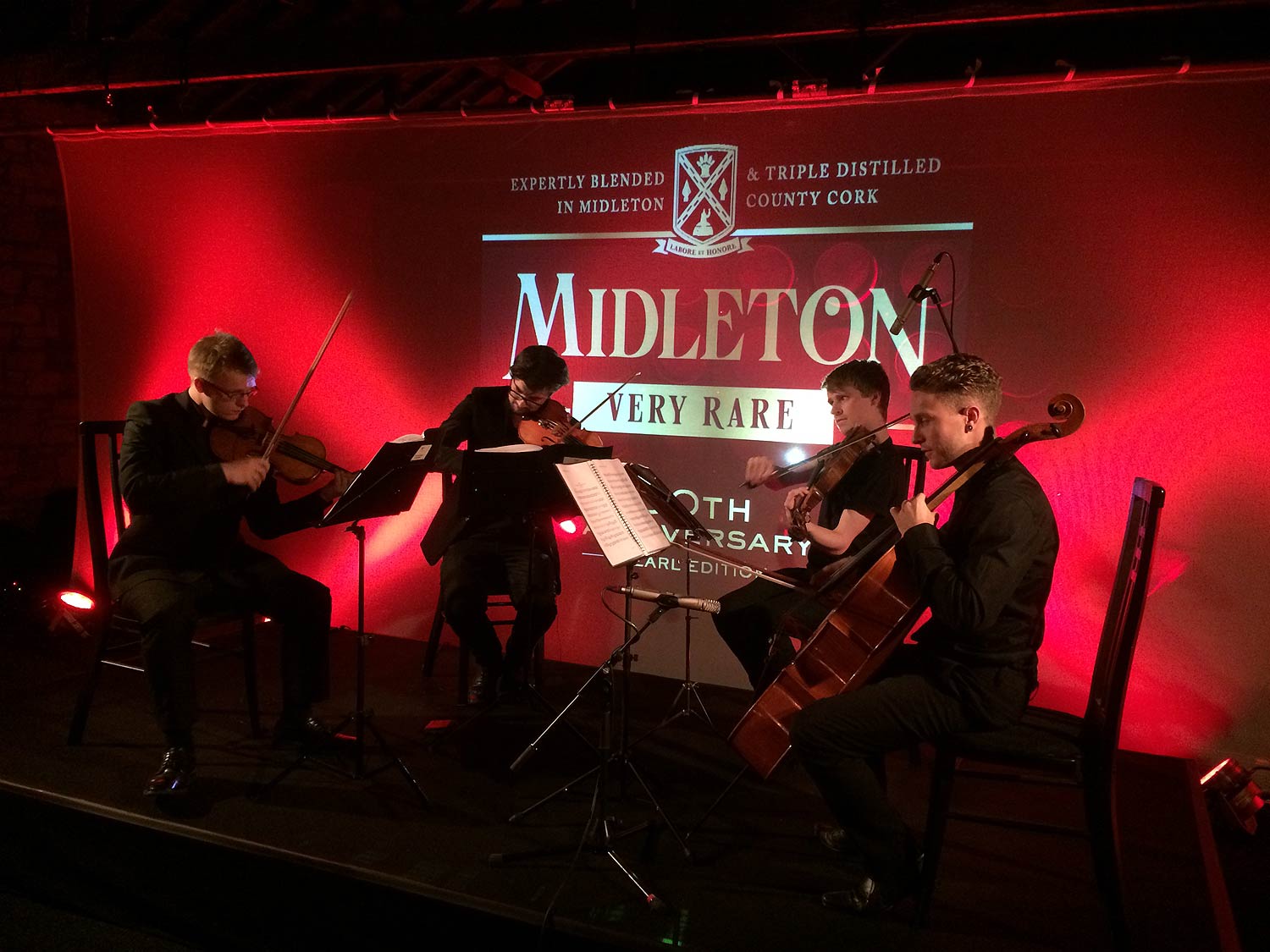 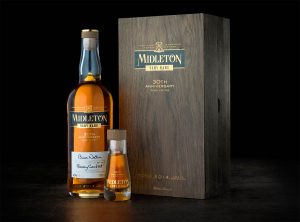 When someone offers you a glass of good Irish whiskey, it would be churlish to decline. When you are offered the chance of visiting the historic Midleton distillery in beautiful rolling countryside just outside Cork in the Republic of Ireland, it would be impolite to decline. But when you are invited to the launch of a very special Pearl Edition of Midleton Very Rare 30 year aged whiskey which will retail at €6000 per bottle, it becomes an offer you simply cannot refuse.

I had a special personal reason to sample this particular most special of Irish whiskeys, as this was to be my very first visit to Ireland and my great grandfather had left Ireland for Scotland 130 years ago to pursue his steeplechase racing career. Irish distillers put us up in the beautifully situated Castle Martyr resort a short drive from the historic distillery in the village of Midleton. The old distillery has been preserved as a visitor centre and the site is now home to the Jameson distillery, making both Jameson and Midleton whiskeys. 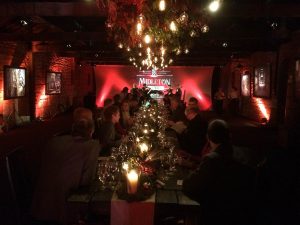 I was expecting a large and glitzy PR event, attended by the world’s whiskey and luxury press, but I couldn’t have been more wrong. Our little, quite soon to be rather merry, band of about 20 journalists seemed to comprise the cream of the world’s whiskey/whisky and spirits press.  For those who don’t already know, whiskey with an ‘e’ is from Ireland and whisky with no ‘e’ is from Scotland.

This was heady stuff for yours truly with the talk at the hotel bar centering around notes, expressions, hints of vanilla, honey and spices and yellow spot, which I thought was something that afflicted the roses! We were soon whisked off to the Midleton distillery through the dark County Cork countryside, only to find the gates locked. I suppose the stock has to be very well guarded. Once inside we were ushered into an old whiskey warehouse, a brick built relic from the old distillery. The warehouse was decked out with subtle and seductive imagery of the trees which the casks are made from, casks full of whiskey, low-lit store rooms, the experts crafting these rare whiskeys and as yet unidentified craft processes.

We were greeted with a glass of, you guessed it, Midleton Very Rare whiskey. This was a good start, being easily the best whiskey I have ever tasted. Meanwhile, a very good string quartet played. 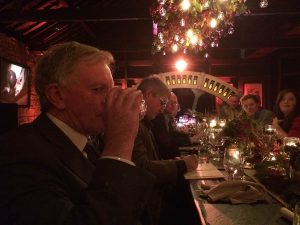 We were treated to a splendid five-course meal courtesy of a local chef using wonderful local ingredients.

Then quite quietly and with the dignity, and reverence this special whiskey deserves. Barry Crockett, Master Distiller Emeritus who sat next to me, moved to the head of the long table. Waiters quietly appeared from the sides of the room, crisp Irish linen Midleton embroidered coasters were placed in front of each guest followed by a finest Irish lead crystal whiskey glass containing the very rarest of Midleton whiskies, the 2014 Pearl Edition. I say rare because just 117 bottles of this whiskey will be offered for sale. Brian the retired Master Distiller introduced the new boy Brian Nation and together they presented the new expression with their rationale for the new whiskey and their interpretation of the flavours and notes we were about to experience.

This fortunate merry band was then invited to taste the whiskey with much sniffing of bouquet, clouding of glasses, the swirling of tumblers, some decanting of the rare liquid into tall wine glasses, with a running commentary from Barry as to what we were experiencing. The room had gone very quiet in almost reverential respect for generations of craft and knowledge. 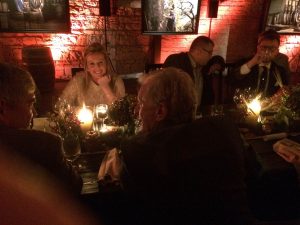 The Pearl Edition was, by a long way, the most amazing and most complex tasting spirit of any kind I have ever tasted. Held on the tongue this 51% proof whiskey gave a very hot sensation and there followed a whole grocery store of taste sensations. One of our merry band described the sensations thus: “The initial fresh herbal notes of crushed garden mint and rosemary, are a testament to the quality of the ex-bourbon barrels in which this whiskey has rested for many years. Soft honey sweetness along with beeswax shows its antique character while hints of gingerbread combine with toasted oak to compliment some pot still spices. The soft silky mouth coating is initially honey sweet, then the fresh herbal flavours follow through with a touch of menthol. The spicy notes concentrate, staying sweet with cinnamon and liquorice before the toasted oak adds to the complexity. The succulence of the herbs and spices is very slow to fade”.

The Pearl Edition is the result of the collaboration of the recently retired Barry Crockett, Master Distiller Emeritus and Brian Nation, Master Distiller, who share between them more than 60 years’ distilling experience at the Midleton distillery in Cork. Barry and Brian personally selected a 1984 Single Pot Still Irish whiskey and a 1981 grain whiskey respectively to blend into a whiskey of exceptional quality. Both whiskeys have been matured in American oak barrels, which after 30 years have imparted luscious vanilla and delicate honey flavours. 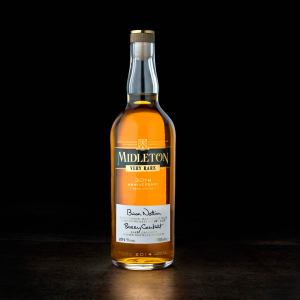 Local artisans have collaborated to provide exceptional and authentic packaging for the expression befitting its quality and rarity. Glassblowers from County Kilkenny shaped each bottle individually, which sits in a grand box fashioned from the Irish oak by some of Ireland’s most skilled wood craftspeople from County Wexford. The case houses a limited edition celebratory booklet and a hand-blown miniature of Midleton Very Rare Pearl Edition to allow whiskey lovers to taste and share the whiskey without opening the full bottle.

Barry Crockett said that few things are worth coming out of retirement for, but the opportunity to be a part of the creation of the Pearl Edition is certainly one of them. Barry is spending his retirement studying industrial archaeology, sailing and co-creating one of the world’s finest whiskies. Sounds a good plan. With only 117 bottles in existence, the Pearl Edition is now available in Ireland, the UK, France, Germany and China. I wondered how much the contents of my glass were worth at retail price.

PLEASE DRINK RESPONSIBLY AND ALWAYS IN MODERATION. ALCOHOL SHOULD ONLY BE CONSUMED BY THOSE WHO MEET THE REQUIRED MINIMUM LEGAL AGE.