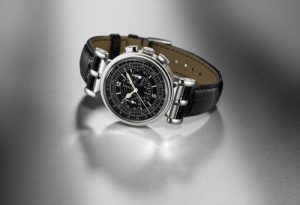 The Milestone 1941 watch is a collectors piece and the ninth release in Omega’s Museum Collection. The renowned Museum Collection is the result of Omega’s desire to combine all of the historic values of the Omega brand with a true dedication to its very high state of the art horological standards. Every year, the Omega Museum Collection selects one classic timepiece which has to be more than fifty years old and subsequently honours it with a reissue blending its design excellence with Omega’s tradition of innovative contemporary watchmaking.

The Milestone 1941 watch is based upon Omega’s reference “CK 2080”, a watch in stainless steel that was watch launched back in 1938 and a favourite of high ranking military officers. The CK2080 watch was the inspiration for the ninth member of the Museum Collection and was delivered in 1941 and subsequently sold at the Antiquorums 2007 Omegamania Auction.
While the new Milestone 1941 Watch has been designed with the utmost respect for its predecessor, it incorporates Omega’s state of the art Co Axial technology and exquisite materials.

Blending traditional watchmaking design and contemporary horological innovations creates a true collectors watch: In keeping with Omega’s penchant for quality the Milestone 1941 Watch is driven by an exclusive Omega calibre 3203. The manual winding chronograph is a COSC certified chronometer and features Omega’s Co Axial escapement with a free sprung balance as well as a column wheel chronograph mechanism.

The Milestone 1941 watch dial has a black varnished dial with a telemetric scale on its first outer ring graduated in kilometres per hour, a minute track on its second outer ring and a “snail” tachymetric scale on the inner ring based on 1000 units per hour. The watches hour track features numerals and indexes which have been coated with Super-LumiNova.

There are also two sub dials, one is a 30 minute chronograph recorder at 3 o’clock and the other a small seconds counter at 9 o’clock. The classic white skeletonised hour and minute hands are filled with Super LumiNova making the Milestone 1941 Watch easily readable in all light conditions.

The Omega Museum Collection Collectors Piece Number 9, called the Milestone 1941 Watch is delivered in a special museum box and is produced in a limited edition of only 1941 very sought after pieces.