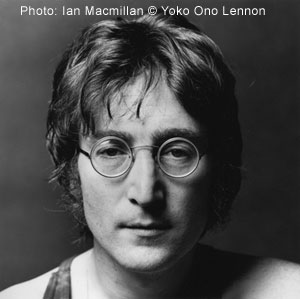 The Montblanc John Lennon Writing Instrument
When you partner an iconic brand with one of history’s most famous music icons, you are always going to be creating something special and this is certainly the case with the Montblanc range of John Lennon writing instruments. What can you say about John Lennon? Former Beatle, successful solo artist and one half of the greatest song-writing partnership in music history and then you have Montblanc, iconic creator of some of the finest writing instruments and luxury goods in the world.
Creating the John Lennon Edition Writing Instrument, Montblanc ensures that Lennon’s legend not only lives on in his verse, music and artistic legacy, but also in the beauty of a timeless writing instrument.
The Liverpool-born musician achieved international recognition as a member of The Beatles, performing to adoring fans all over the world. However, it was his solo work after the band dissolved, which established him as a cultural icon.
Not only was John admired for his music, he was also considered a great thinker, an independent mind and a true visionary whose influence shaped the intellectual mood of an era.

This year, Montblanc is celebrating a legendary musician and enduring spirit: John Lennon.

To John. With Peace and Love.
The Montblanc John Lennon Edition writing instrument  is based on John Lennon’s genius, reflecting his iconic status through the creation of a fountain pen, ballpoint pen, a rollerball and a record of Lennon’s most famous single “Imagine”.

Sharing many convictions about the responsibility of art and culture, Montblanc will honor John Lennon’s life, his music and his dreams by contributing to selected cultural projects which support music education and collaborating with John Lennon Education Tour Bus, a US non-profit organization providing young people with the means to learn how to compose, play, perform, record and produce songs and music videos. 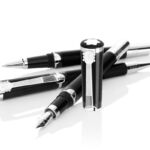 The John Lennon Special Edition writing instrument.
Like picking up an old-style vinyl record, the John Lennon Special Edition evokes a striking feeling at a simple touch. The gentle grooves chiselled into the black precious resin of the barrel evoking a vinyl groove texture.
The Special Edition incorporates design elements of the musical genre of the 50s and 60s: The platinum-plated clip, for example, takes its inspiration from a guitar neck, with tuning pegs and finely etched strings on the neck, while the platinum-plated plaque is engraved with Lennon’s famous self-portrait. The handcrafted rhodium-plated 18k gold nib bears the message that John helped spread with his music: the peace sign. 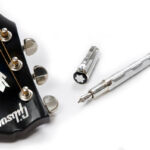 The Edition, limited to only 1940 pieces, honouring the year of Lennon’s birth, is available as either a fountain pen or a rollerball and features a 925 sterling guilloche underlay with translucent white lacquer reminiscent of the motif of the round mosaic where people gather to remember the dearly missed poet.
The blue tanzanite crowning the guitar-inspired clip hints subtly at Lennon’s blue glasses, while the pen’s cone is engraved with the release date of “Imagine”: 02.10.1971. The rhodium-plated 18k gold nib bears the sign so often traced in flowers on the circular memorial mosaic: the peace symbol.

John Lennon Limited Edition 70 writing instrument.
John Lennon’s 70th birthday would have fallen on October 9th, 2010.
In commemoration of the 70th birthday of the legendary musician, this unique edition writing instrument is limited to 70 pieces and pays homage to his greatest solo hit. The word “Imagine”, artistically rendered in a skeleton of 750 white gold, encircles the John Lennon Limited Edition 70. 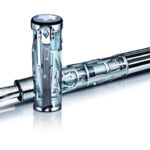 The blue tone of the transparent precious resin on the cap and barrel makes a fond reference to Lennon’s trademark accessory, the blue round glasses, a colour nuance also seen in the set of blue sapphires on the “guitarneck” clip, alongside three diamonds that represent the chords of the song “Imagine”. The cone is a tribute to his instrument of choice for the song: the keys of a piano.
Discover the John Lennon Edition 2010 and the genious of an artist,who wrote music history, in a stunning Online-Special that captures Lennon’s incredible soul and the spirit of an era.