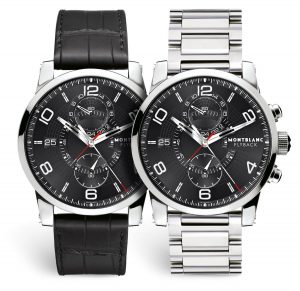 Few brands can rival Montblanc’s skill in creating products with unmistakable and timeless iconography. The TimeWalker line has represented the modern personification of Montblanc’s DNA for several years, a collection which won a standing ovation last year with the TwinFly chronograph and Montblanc’s own movement. Its appeal derives from sleek and distinctive styling that’s strongly inspired by modern, open, glass-and-steel architecture.

Alongside two unlimited versions in stainless steel (referenced by the ident numbers 104286 and 105077), Montblanc received great recognition after launching the TimeWalker TwinFly Chronograph Black Titanium in 2011, a 43 mm manufacture timepiece limited to only 300 pieces (carrying the ident number 106507) that gave new beauty to a function which had once been very popular: a measuring instrument for brief intervals with both an elapsed-seconds hand and a sixty-minute counter from the centre of its dial.

This wristwatch experienced such gigantic success that Montblanc decided to present a second limited-edition model in an exclusively styled version one year later at the SIHH Salon in January 2012: the Montblanc TimeWalker TwinFly Chronograph GreyTech, restricted to only 888 specimens and priced at £9,500 (including VAT). This watch perfectly combines technical refinement, innovative materials and discriminating design.

The Montblanc TimeWalker TwinFly Chronograph GreyTech makes a very distinguished, modern, and technical impression. Satinised and pearl-blasted finishing gives the solid titanium case a monochrome and simultaneously contrast-rich aspect. Various shades of grey distinguish its large dial, where connoisseurs will find seven-time indicators, generously proportioned apertures for the grey date disc, a pierced and anthracite-grey hour-hand and minute-hand, and large Arabic numerals. Grey elegance continues on the back, where a pane of sapphire crystal invites aficionados to admire the movement with its rhodium-plated dark grey chassis parts, which create a fascinating contrast with the golden wheels, the blued screws and the red ruby bearings. This perfect synthesis of technically oriented design, highly robust and extra-light case material, and elaborate micromechanics, convinces watch lovers that understatedly elegant aesthetics and exclusive functionality have lost none of their popularity, even in the era of the smartphone. 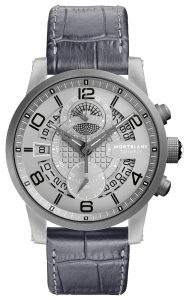 The Montblanc self-winding chronograph Calibre MB LL100 is assembled, finely adjusted, and encased under the brand’s aegis and in its spacious ateliers in Le Locle. This manufacture movement from Montblanc is also a chronograph, which is entirely logical because the world’s leading name in exclusive writing implements likewise strives toward a comparably foremost position among “time writers,” i.e. chronographs. Considering the speed and dynamism of developments at Montblanc, this ambitious goal doesn’t seem quite so unattainably audacious. The chronograph Calibre MB LL100 has all the characteristics of highly evolved horological artistry: the chronograph’s functions are controlled via a column-wheel; a modern and extremely low-wear disc-coupling engages to transfer energy from the fourth-wheel to the chronograph-wheel; and a newly calculated profile for the gear teeth significantly improves the energy efficiency.

But the most eye-catching exclusivity is the chronograph function: a long elapsed-seconds hand and a somewhat shorter counter for sixty elapsed minutes are both centrally axial. When the flyback function is triggered, these two indicators race back to their starting position and instantly restart measuring another elapsing interval, whence the neologism “TwinFly” in the model’s name. The number of elapsed seconds is shown along the outermost periphery on the flange of the dial, whereas the elapsed minute counter has a large and therefore readily legible sixty-minute scale in the centre of the dial. Other functions include a date window at “9 o’clock” and a 24-hour subdial for the second time zone at “12 o’clock.” A special feature of Calibre MB LL100 is its double barrel, which gives this movement a power reserve of approximately 72 hours’ duration: an ample reservoir of power is better able to compensate for amplitude fluctuations that occur when the chronograph function is switched on or off, and it also improves the stability of the rate in all operating modes.

The matte grey titanium case is distinguished by the unmistakable “handwriting” of Montblanc’s TimeWalker family of watch models. The case’s liberal diameter of 43 mm and the narrowness of the bezel result in a very large dial: this spaciousness visibly enhances the legibility and the readily comprehensible arrangement of the individual displays. The horns, which are skeletonised in the typical TimeWalker style, reliably hold an anthracite-grey alligator-skin wristband with large quadratic reptilian scales and a tone-in-tone grey stitching. A pronged buckle made of bead-blasted titanium keeps the strap securely closed around its wearer’s wrist. 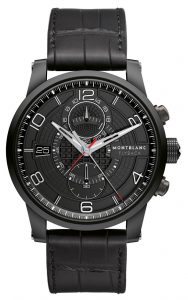 In accord with the understated styling in shades of grey, the case is matte finished all around, the middle part of the case is vertically brushed, and both the bezel and the edge of the case’s back are bead blasted. The result is a discreetly technical look that instantly identifies this wristwatch as a functional time-measuring instrument. The excitement that this high-tech aspect can generate becomes evident at the very latest when one peers through the sapphire crystal in the back and through the slightly cambered sapphire crystal above the dial. The face has large piercings and a very lively appearance thanks to various shades of grey.

Circular apertures inside the hour-circle allow one’s gaze to penetrate to a somewhat darker date disc with raised anthracite-grey numerals; the current date is surrounded by a white frame at “9 o’clock.” Six anthracite-grey numerals in raised relief mark the hour-circle; white scales are printed for the second time zone at “12 o’clock” and for the small seconds at “6 o’clock. Special mention is earned by the second time zone with its anthracite skeletonised hand: a shiny anthracite-coloured sunburst in raised relief adorns this display’s 24-hour dial for the daytime hours from 6 a.m. to 6 p.m., while the night time hours are portrayed by a net of arcs which symbolise the paths of the stars across the firmament. The smallest details are of the utmost importance on a wristwatch: this is evident here in the large hands for the time display and the chronograph’s function. The anthracite-grey hour and minute-hands are coated with luminous material, which combines with noctilucent indices to assure good legibility in the dark.

Another attractive aspect of the GreyTech comes into view through the sapphire window in the back: the movement with its black rhodium-plated components. A layer of dark grey rhodium has been applied to the plate bridge, which is traditionally decorated with Geneva waves. The same coating embellishes the generously skeletonised winding-rotor with its extra-heavy oscillating weight and pierced Montblanc emblem. As one would expect an outstanding chronograph, the column-wheel that controls the chronograph’s start, stop and flyback commands is likewise visible. This firework of horological technology is certain to spark enthusiasm.

The Montblanc TimeWalker TwinFly Chronograph GreyTech timepiece is now available to order from Montblanc boutiques at a price of £9,500.00 (including VAT).