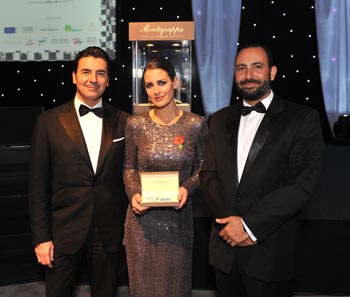 The star-studded Chequered Flag Ball returned to Abu Dhabi on November 11, as celebrity guests and the great and good of Abu Dhabi society kicked off a weekend of glitz, glamour and Formula 1.

Montegrappa was this year’s Platinum Sponsor, and the evening was attended by the Montegrappa Middle East team, Montegrappa CEO, Giuseppe Aquila, who flew in specially for the occasion, and Abdullah Al Sayegh, from Al Sayegh Jewellery, Montegrappa’s retail partner 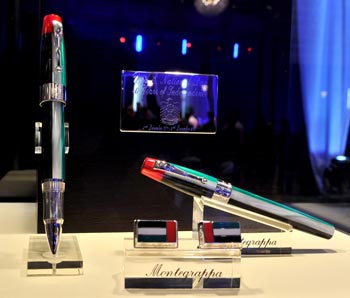 for Abu Dhabi. Although this took place on the special date, the 11th of the 11th of 2011, the UAE has a bigger date looming, the 2nd of December 2011, when the country will celebrate its 40th Anniversary since unification of the 7 Emirates in 1971. Therefore, this special occasion was marked by the first public unveiling of Montegrappa’s UAE National Day pen, a Limited Edition pen celebrating the 40th year anniversary of the unification of the UAE.

One of the Limited Edition National Day pens, appropriately, number 1111 (out of 1971), was sold at auction over the course of the evening with funds raised being given to the Christina Noble Children’s Foundation, an international charity organisation dedicated to serving underprivileged children in Asia. The pen raised an exciting 8,500 Dirhams (equivalent of aprox $2500) for this good cause, and the pen was taken home by the winning bidder who also happened to be a great Montegrappa pen collector who had visited Bassano in the late 90s but had not been in touch with the brand since then.

Speculation about the end of the world at 11:11 on 11/11/11 turned out not to be true after all, with the celebrations going on late into the night and the following morning. What a way to kick off the Abu Dhabi Formula 1 weekend!