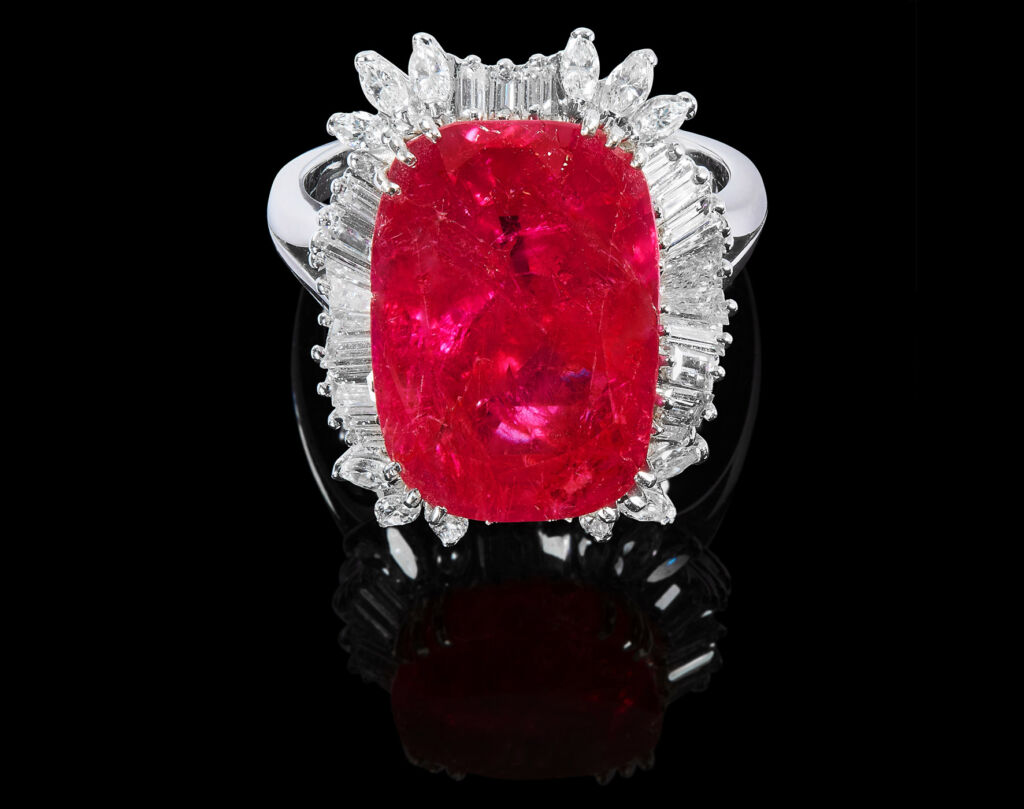 Elmwood’s auctioneers will be offering a spectacular 14.67-carat natural Burmese ruby ring in its upcoming sale of Important Jewels on November 28, 2019.

Natural rubies above 5 carats are extremely rare, so to have one over 14 carats is extraordinary, which means that rubies of this size infrequently come onto the market.

This impressive ruby is accompanied by two gemmological reports, confirming it is of Burmese (Myanmar) origin, with no indications of heat treatment, meaning it is natural and unheated. 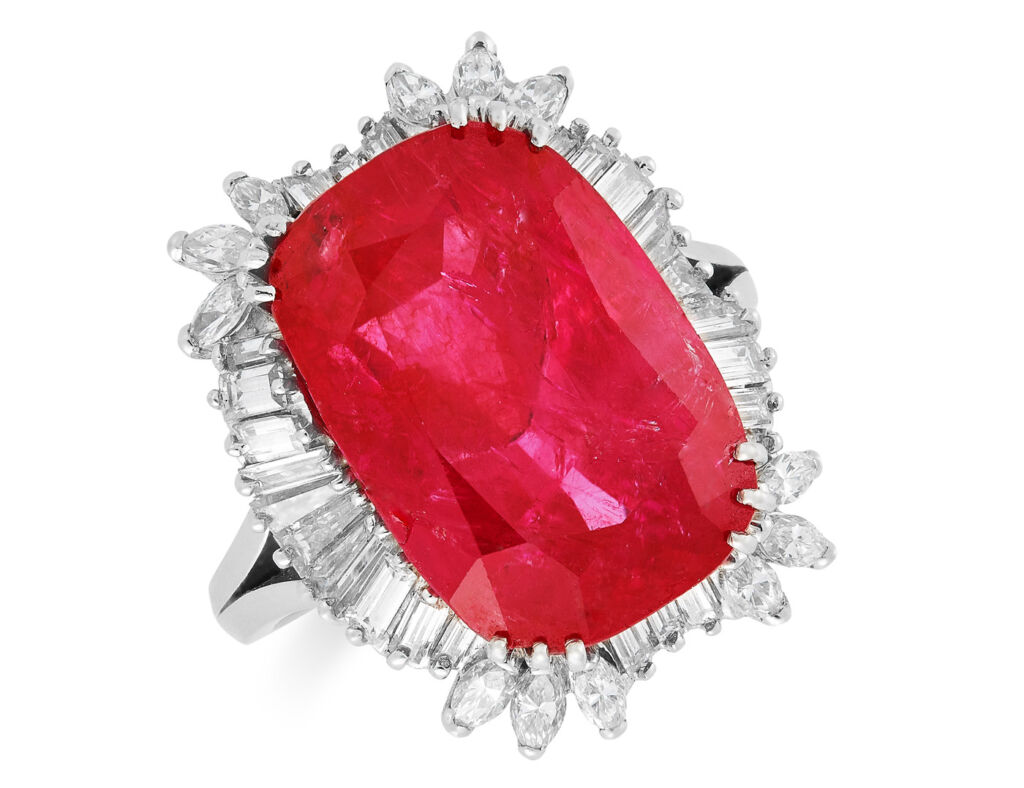 The ring is set with a cushion-cut ruby encircled by a border of marquise and baguette-cut diamonds in ballerina style and is estimated to fetch £30,000-£50,000.

Exceptional rubies are the main theme of the sale, with another exciting addition of an important Burmese ruby and diamond bracelet, comprising a row of an alternating cluster and openwork links, set with ten oval cut rubies, totalling 17.0 carats. They are encircled with diamonds and a princess-cut set clasp. 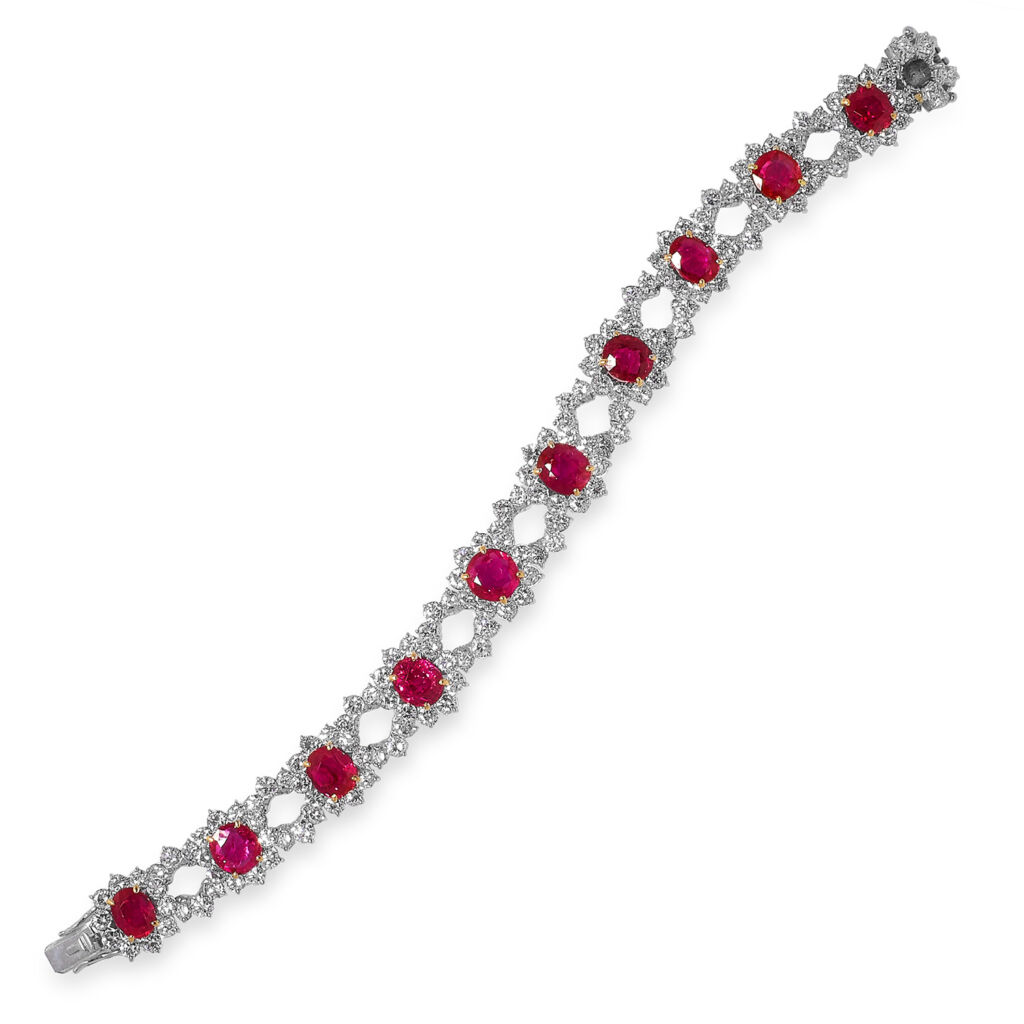 Again accompanied by a gemmological report, which states it is of Burmese (Myanmar) origin, with no indications of heat treatment. It is estimated to fetch £80,000-120,000.

Also in the sale is a Bulgari Trombino ring, one of Bulgari’s longest-standing and most highly-desired designs. The ring comprises an oval-cut Burmese ruby of 7.61 carats, set in a border of baguette and round-cut diamonds.

It is signed Bulgari and is accompanied by two gemmological reports, confirming that the ruby is of Burmese (Myanmar) origin, with no indications of heat treatment. It is estimated to fetch £6,000-£8,000.

Commenting on these outstanding rubies, Samuel Hill, Director of Elmwood’s auction house, said: “We are tremendously excited to have such a trio of important ruby jewels to headline our November auction. It is very rare for a fine, untreated ruby of 7.61 carats to come on to the market, so to have both this and a 14.67-carat example is truly remarkable.

We expect fierce international bidding from private and trade buyers alike, which could render this as one of the most expensive lots of jewellery sold at auction in the UK this year. We are also quietly confident that we will break our house record, currently held by a 9.46-carat sapphire ring, which sold earlier this year for £168,000”.

Rubies are found throughout the world from Australia to Africa, but the most famous and prized stones come from the remote ruby mines in Mogok, Upper Burma (Myanmar). This small area, only a few square miles, is known as the “Valley of Rubies” and has produced some of the most beautiful gemstones in the world.

To read more articles on watches and jewellery, visit our dedicated section here.