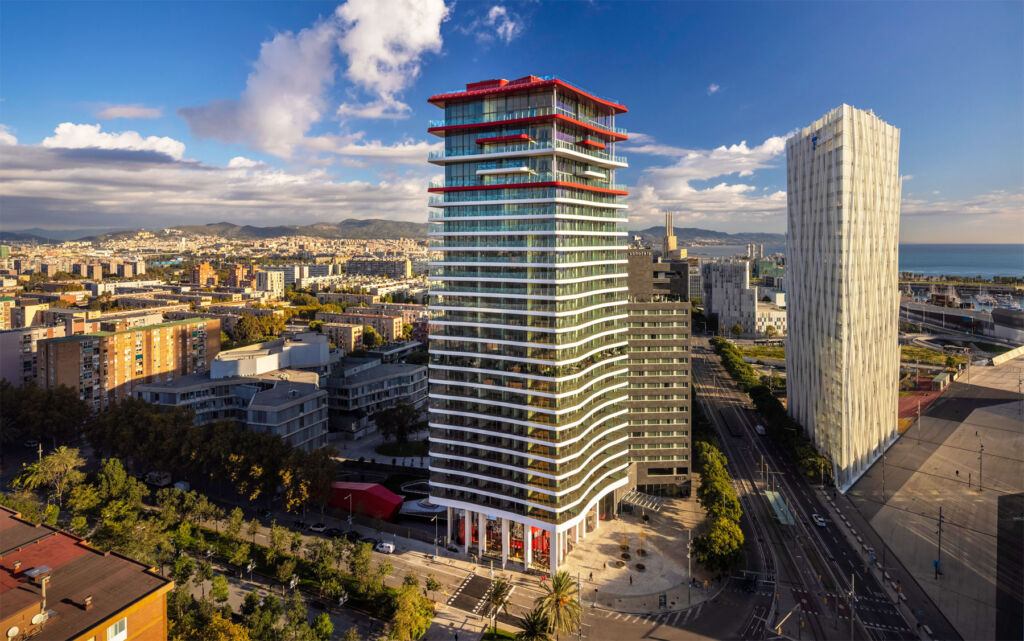 Barcelona’s skyline has been reshaped, and it’s all down to the artistic mind and skills of Odile Decq. The renowned architect has created Antares, a 30 story tower of luxury living, gardens, and amenities standing in the Diagonal Mar district. In this feature, we’ll look at how the project began, the obstacles and the inspiration behind it.

Antares’s unique undulating form, colour scheme and total design authorship by the architect Odile Decq recall the artistic playfulness of the city’s past and artistic greats such as Joan Miró and Antonio Gaudi. 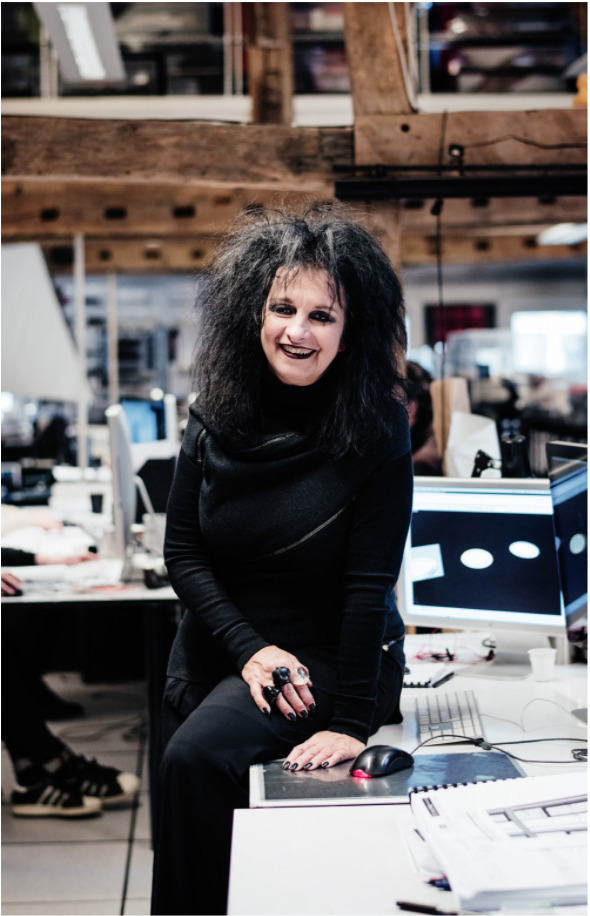 “For me, architecture doesn’t end once I’ve designed the building; it’s when all of the objects, the spaces and design, are in coherence and harmony with the tower. Only then do I deliver the key to the client. That for me is architecture.”

In 2015 Studio Odile Decq won a competition to transform an abandoned relic of the 2008 global financial crisis into a residential landmark. The project involved working within the constraints of a strict building code, with a pre-existing structure, coupled with the local government’s aversion to high rise development. This wasn’t too much of a problem for Odile Decq.

Using her characteristic “can do” attitude, she has delivered an important contemporary work of architecture and lifestyle that resonates with the Catalonian capital’s independent spirit and brings fresh character to the seaside neighbourhood in the form of a new cultural landmark.

“Constraints are an architect’s challenge,” said Decq. “But this project had more than usual. Happily, it gave rise to an innovative and beautiful project. Like many good things in life, the idea for it came quickly.”

Astonishingly, Decq’s first sketches of the architecture were exactly as the building is today.

To build to the 100-metre high limit, ten floors were added to the pre-existing structure, making room for 88 apartments, including 100 m2 to duplexes with 5.8m ceiling heights and penthouses extending to 400 m2. 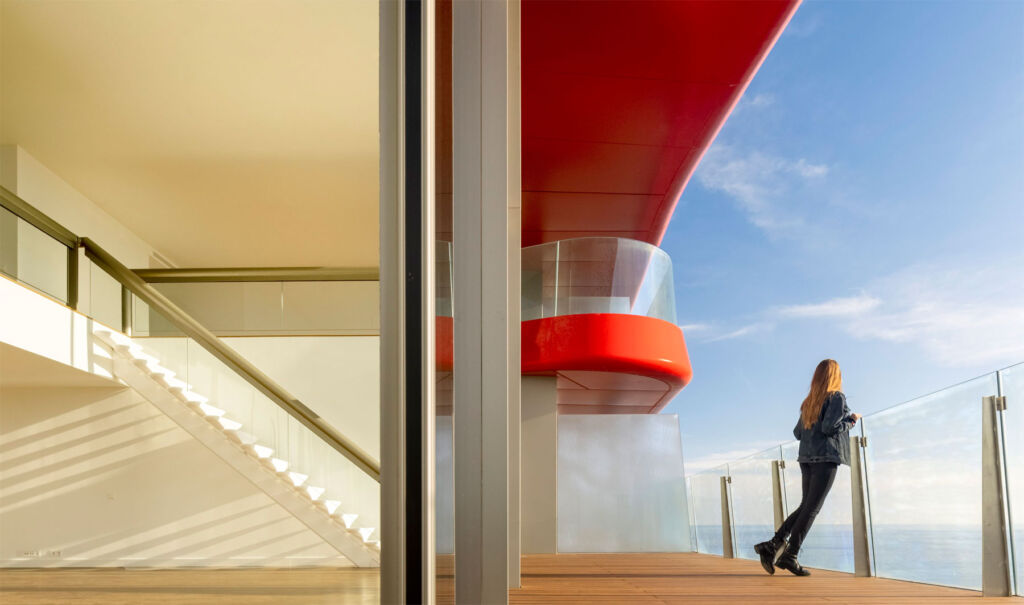 Decq extended each floor of the pre-existing structure to create large flowing balconies around the building. Antares summits with a Sky Terrace featuring a rooftop infinity pool and 360° uninterrupted views to the horizon in all directions over Barcelona and the
Mediterranean sea.

The ground level has a fully landscaped garden, outdoor pavilion and a wide array of additional amenities designed by Decq. The development also benefits from underground parking, staff quarters, a variety of amenities in the basement, including a 1,000 square metre wellness area with a spa, a swimming pool, a hammam, a sauna, a gym and yoga facilities. 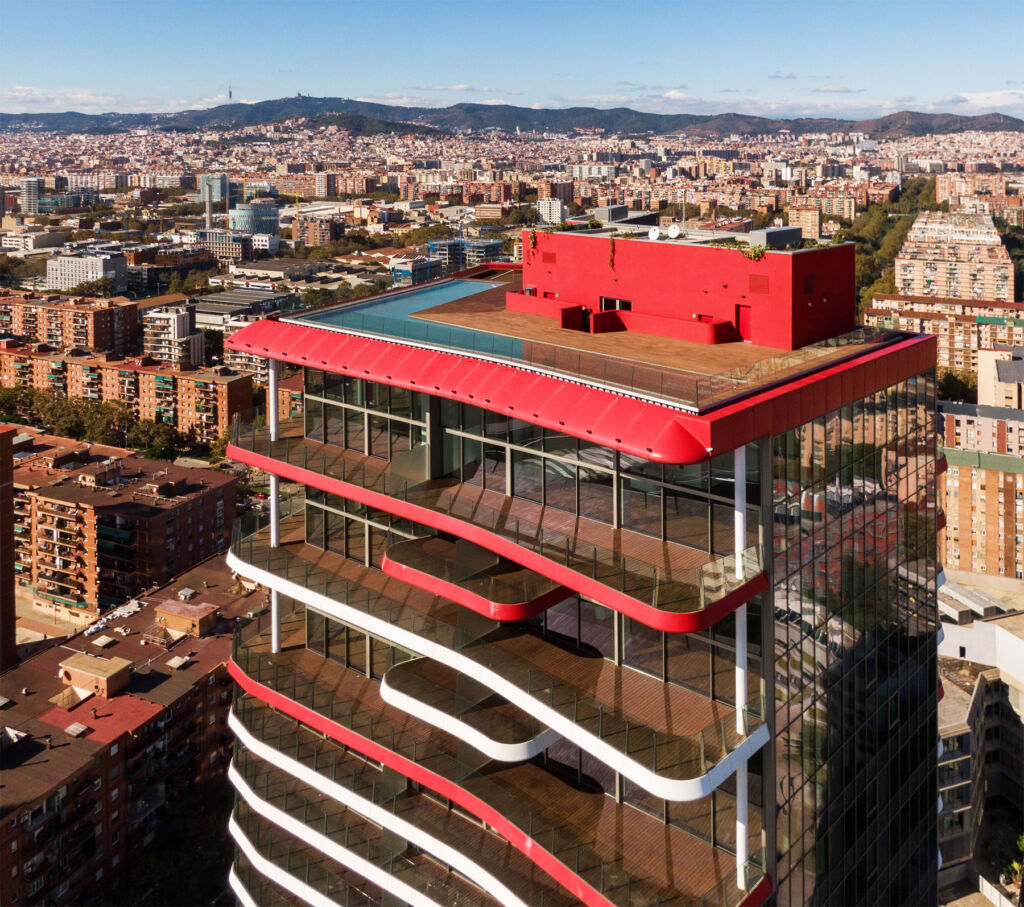 Decq worked on the building’s perception using her renowned and distinct artistic approach, transforming the static, standard high-rise mass into a light, dynamic and fluid form. She took full advantage of the additional height and the developer’s request for balconies. These surface areas were used to alter the perception of the building’s volume when viewed from different angles. 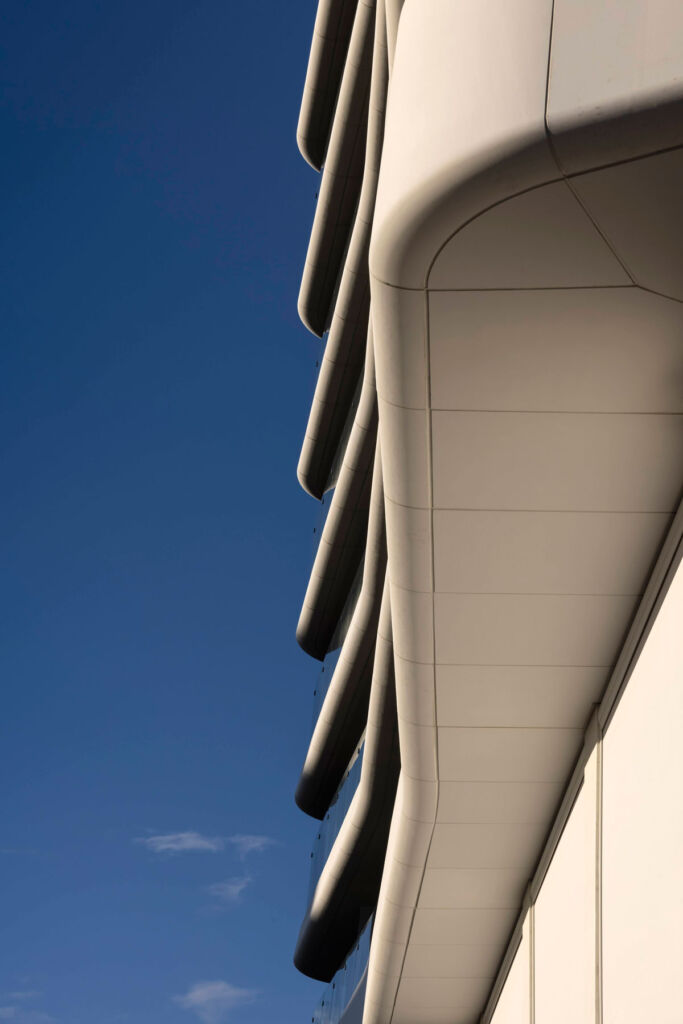 The curves of each balcony create the phenomenon of entasis (the same visual trick was used on the Parthenon in Athens in 447 BC), enhancing the impression of height.

Their indented geometry creates waves, transforming the building into a visually dynamic tower, echoing the fluidity of the neighbouring Mediterranean sea. This distinctive character, with its splashes of red, creates a singular new landmark in Barcelona’s Skyline.

“When I was selected, they told me that they thought my proposal best captured the spirit of Barcelona in my project,” explains Decq. “When I asked why? They replied, ‘because of this red touch at the top. It’s a building that is joyful.'”

The red colouring is a common theme in Decq’s work. “It’s one of my favourite colours”, she points out. “Black is too, but I don’t like to impose my dress sense on my client’s architecture”, she quips. “Red is the colour of Barcelona. It’s passion. It’s life. I wanted the red on the top of the building to be like a flag-signalling the building’s presence and identity.”

Decq’s interior plan is designed to orient the inhabitant towards the building’s spectacular surroundings. The sea, the horizon, the city and the Montserrat mountains to the west are omnipresent from each floor thanks to floor-to-ceiling glass exterior walls and balustrades. 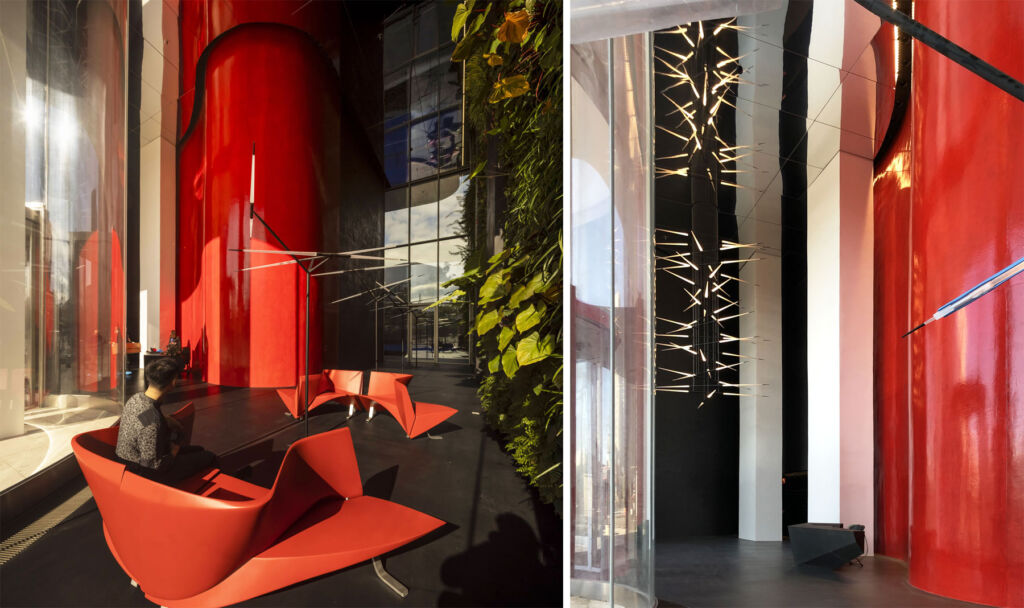 With her passionate pursuit of confluence in all domains, Decq was eager to create an all-encompassing design scheme, something she calls ‘Global Design’. “I have always tried, since the very beginning of my career, to do more than just architecture. I want to have a hand in all aspects of life in the building.” 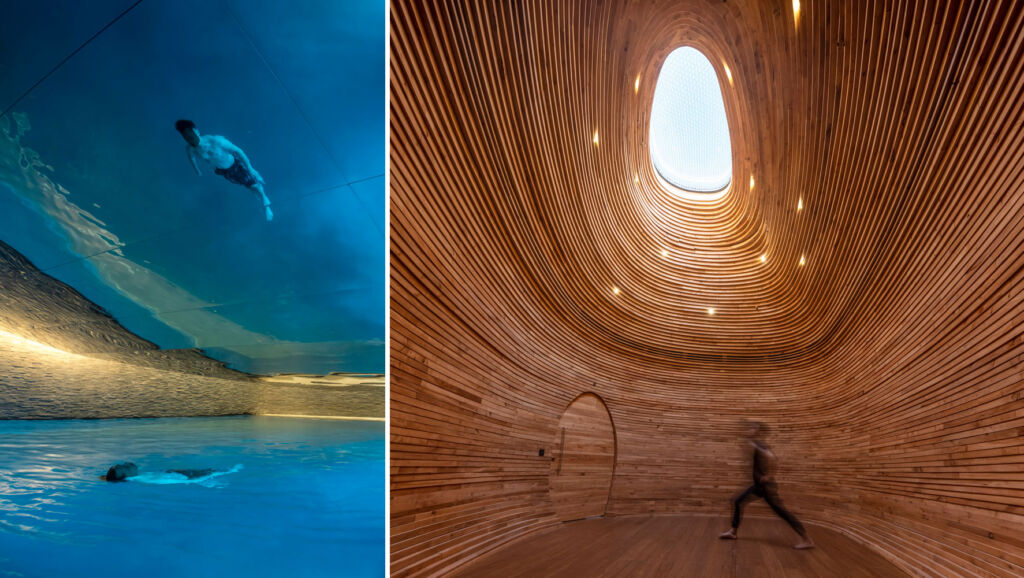 Kitchen islands, sinks, furniture, lighting, lobby interior, landscaping and architecture combine to create a singular, coherent, fully authored experience by one of the most creatively engaged architects working in the world today.

“With Antares, I have looked for a design that breathes dynamism in every place and every moment. A dynamism that emanates from the city itself and that has always fascinated me. That gives the building a strong identity and an enriching perception of time and space that shows a holistic approach of design from the outside to the inside by relaying the idea that each part of the building is a whole, with its components in relation and constant interactions between them and the whole.” – Odile Decq. 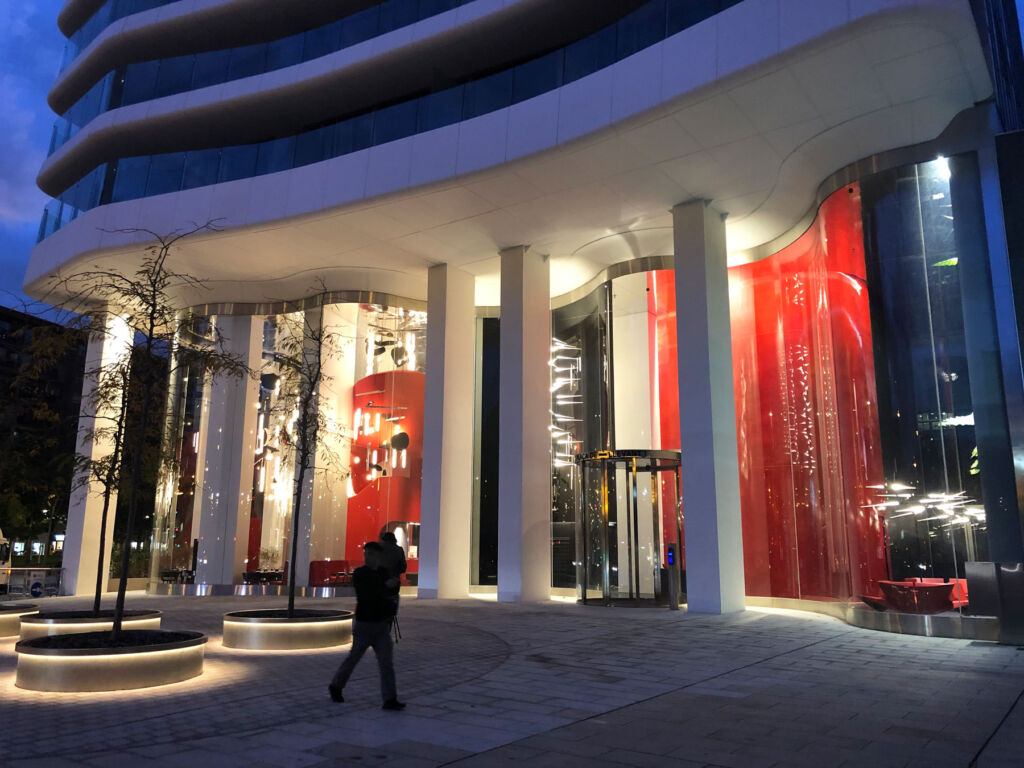 Definition
Antares: a giant red star of very low density that is the brightest star in Scorpius, regularly signalling its place in the universe. A constellation that is visible in the southern night sky from most locations in the Northern Hemisphere.

Altitude with attitude – Odile Decq
“From the sea to the sky
From the sky to the sea
Smoothly undulating with a visual distortion
Twisting dynamically
Irregular but continuous
New form, new shape, new curves
Everywhere the same transformation
Antares proceed of a Global Design
White and Red, Red and white
And some dots of black
Swimming in the sky when flying over the sea
Magic height and horizontal extensions
An adventure to live.”