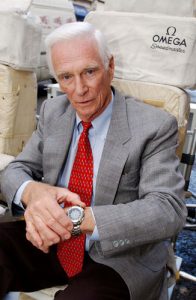 When the astronaut and OMEGA ambassador Eugene Cernan celebrate the 30th anniversary of the day he became the last man to leave his footprint on the Moon. Omega was proud to mark the occassion with the launch of the Omega Apollo XVII commemorative edition of the Speedmaster Professional : the only chronograph to be flight-qualified by NASA for manned spaceflight.

Despite ever-increasing interest in space and space exploration, Captain Eugene Cernan remains the last person to leave an imprint of his footsteps on the moon. Indeed the Apollo XVII mission, led by Commander Cernan, marked the end of a golden era in space exploration. After 12 days, 13 hours and 52 minutes, Cernan and his crew touched down having completed their groundbreaking mission, during which they collected 108.86 kgs of rocks and covered over 30 km in a lunar revolving vehicle.

The Omega Speedmaster Professional Chronograph is the only watch ever to have been worn on the Moon. The Omega expertise in watchmaking ensured that this chronograph beat all of its competitors to survive NASAs two-year programme of stringent tests and was flight-qualified for all manned space flight missions. The fact that it was also chosen by the Russian space agency for extra-vehicular activity is testament to the extraordinary reliability of this movement.

The movement ‘861’ calibre that equipped the original Speedmasters is still used in the collection today. Like all Omega watch movements, it employs the very latest technical standards yet retains its original design: the classic ‘Moon Watch’ features the 1960s black dial with luminous hour markers, luminous hands and stainless steel bezel with a black aluminium ring bearing the tachymeter scale, which allows the calculation of the speed of a moving vehicle or the hourly input of a machine. It remains one of the best-selling Omega chronographs and Eugene Cernan still wears his watch today!

In celebration of the 30th anniversary of the final Apollo mission, Omega launched a special Omega Apollo XVII commemorative edition Speedmaster Professional. The production of the Omega Apollo XVII commemorative edition was limited to only 3000 pieces, all of which are distinguished by a special case back bearing an imprint of the original Apollo XVII mission patch worn by the crew. The patch bears the inscription, “E.A.CERNAN APOLLO XVII 12.14.1972 LAST MAN ON THE MOON”. 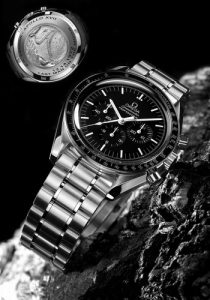 About the legendary Omega Moon Watch
The legendary “Moon Watch” – flight-qualified by NASA for manned spaceflight missions in 1965 and the only watch ever to be worn on the moon. Its timeless design remains ever-popular: stainless steel case and bracelet, calibre 1861 mechanical hand-winding chronograph with hour and minute display, continuous small seconds hand, central chronograph seconds hand, 30 minute and 12 hour totalisers, start-stop pushbutton at 2 o’clock and return-to-zero at 4 o’clock, power reserve of 40 hours. Luminous hands and hour markers (Super Luminova), hesalite crystal (does not shatter into small pieces if broken), screw-in case-back, water resistant to 30 metres, time display to 1/5th of a second. The tachymeter scale on the bezel allows calculation of a vehicle’s speed, a machine’s hourly production etc.