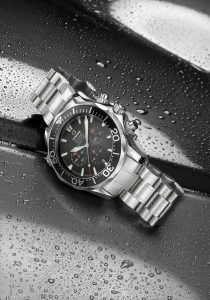 A luxurious look back at the OMEGA Seamaster Professional 300m watch

In many watch officiados eyes the Omega Seamaster has always been the ideal timepiece for those whose lives take them on or under water. Thanks to close collaboration with some of the world’s most famous ocean explorers, Omega has always offered the state-of-the-art in divers watches and has been responsible for some of the major technological developments in this area. The sum of all this achievement is found in the OMEGA Seamaster Professional 300m – the definitive divers watch.

Omega has strong links with the ocean, thanks to the longstanding popularity of its Omega Seamaster watches with deepsea divers and sailors alike, as well as Omega’s role as official timekeeper at some of the world’s most prestigious sailing events, including the America’s Cup. Omega celebrated its role as Official Timekeeper of the America’s Cup 2000 with a limited-edition timepiece that added an extra touch of class to the Omega Seamaster range. This was achieved by enhancing the standard stainless steel OMEGA Seamaster Professional 300m chronometer with a white gold bezel with raised markers. A special limited series of 9999 pieces was produced with the Americas Cup logo on the dial with ‘Limited Edition’ engraved on the case middle.

Omega Seamaster Professional Chrono-Diver
Whilst the new Seamaster Professional Chrono-Diver takes up the baton as Omega’s next ‘America’s Cup watch’ for the 2003 America’s Cup, the original limited-edition Omega watches proved so popular that they decided to incorporate a new model in its standard Seamaster collection. Following the same lines as the America’s Cup watch, the new Omega Seamaster model is enhanced with a white gold bezel and applied hour markers and Omega symbol, as well as the new Omega Seamaster metal bracelet. It has the same exacting specifications as all Omega Seamaster Professional models: self-winding certified chronometer movement with 44-hour power reserve, helium escape valve, high-legibility hands and hour markers with Super Luminova coating, anti-reflective, scratch-resistant sapphire crystal and water resistance guaranteed to a depth of 300 metres. The watch is also available in the equally popular mid-size version, with a slightly smaller case diameter of 34.8 mm.

The result is the Omega Seamaster Professional 300m, a watch that appeals both to ladies and gentlemen looking for the classic sporty Seamaster design with a prestige edge in a watch that fits perfectly in any situation, whether exploring the ocean depths or the culinary delights of a sumptuous black-tie dinner! 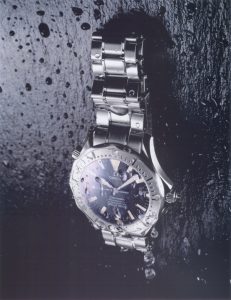 The Omega Seamaster Professional Chrono Diver already had a considerable pedigree. Launched back in 1993, the Seamaster Professional Chrono Diver represented the top of the range in the new Omega Seamaster Professional 300m line – a collection of divers watches guaranteed water resistant to a depth of 300m. All the watches in this collection are equipped with Omega’s helium escape valve, which can be opened during resurfacing to allow helium molecules to escape from the watch and thus prevent the crystal from being pushed out during decompression. Furthermore, the Chrono-Diver was the first chronograph in the world with pushbuttons that could operate at a depth of 300m. Its qualities were tested in 1993, when French freediver Roland Specker set a new world freshwater freediving record in Lake Neuchâtel at a depth of 80 metres with a dive time of 2 minutes 33 seconds. Freshwater is much colder and darker than the sea and is therefore a much greater challenge for the diver… But not a problem for the robust Omega Seamaster Professional Chrono Diver which easily coped with such extreme treatment. The quality and reliability of the Chrono Diver was confirmed when it received the award Watch of the Year 1994 from the renowned German trade publication Armbanduhren International.