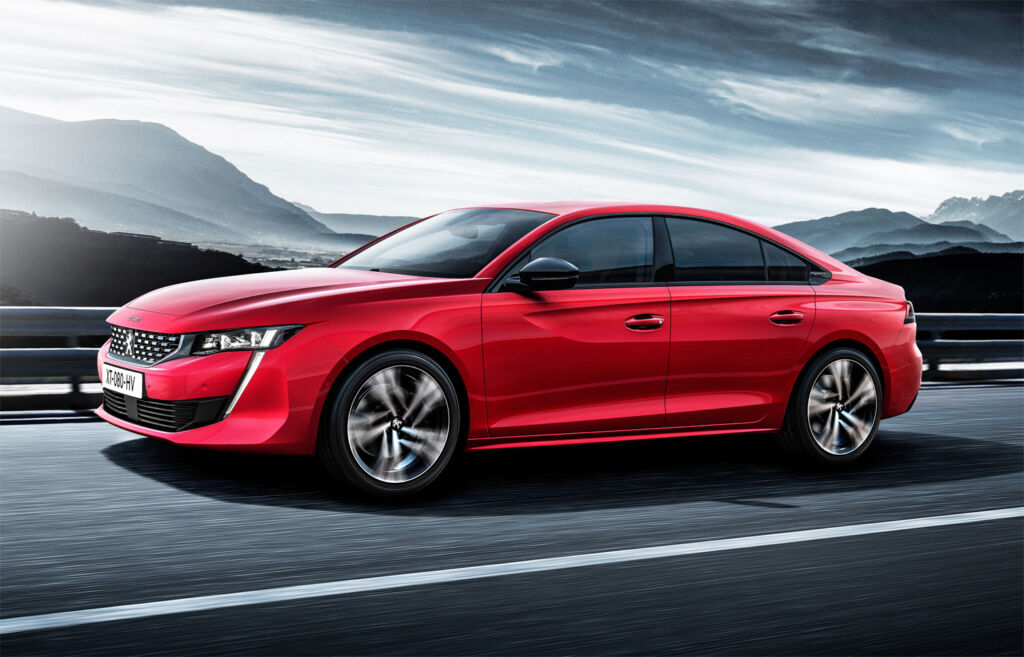 Simon Wittenberg returns to the road after a brief hiatus to put the all-new plug-in hybrid variant of the PEUGEOT 508 GT saloon through its paces.

Overview
For a spot of history, the first generation of the D-segment PEUGEOT 508 was launched in 2010, replacing both the 407 and the larger 607. This model then received a midlife refresh back in 2014 prior to the latest version being unveiled in 2018 at the Geneva Motor Show. Now sitting on the PSA Group’s EMP2 chassis (also used for the DS 7 Crossback and Citroën Picasso, amongst other cars), there are two body styles available for the 508, and they are namely the five-door Fastback saloon (which we tried) and the estate (better known as the 508 SW).

Excluding the First Edition at launch, there are four variants in the current 508 Fastback range, starting with the entry-level ‘Active’, and culminating with the top-of-the-range ‘GT’, priced from a reasonable £36,825 OTR before optional extras.

Married to an eight-speed fully automatic transmission, the GT trim provides the choice of a 180 hp 2.0-litre BlueHDi diesel unit, a turbocharged 225 hp 1.6-litre PureTech (PT) Euro 6d petrol engine, or a 180 hp PureTech 1.6-litre PureTech (PT) petrol powerplant combined with a 110 hp electric motor (delivering an actual total of 225 hp), the configuration found in the all-new plug-in HYBRID (PHEV) which only went on sale as recently as May 2020.

Costing from £40,645 OTR, the PEUGEOT 508 HYBRID GT PT 225 e-EAT8, as its officially called, and the spec of our test car, offers owners the best of both worlds in terms of driving an electric car and having one with a traditional internal combustion engine. In fact, with the HYBRID, there’s the option to drive up to 40 miles with zero emissions at the tailpipe when fully charged. 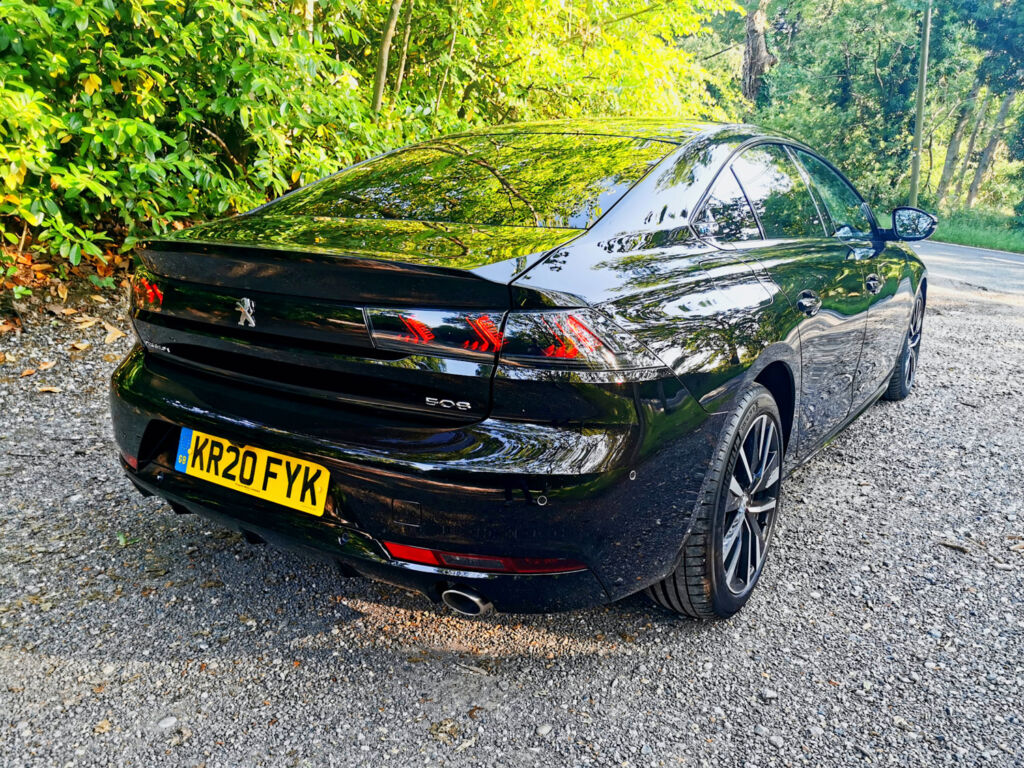 On the outside
Penned by Pierre-Paul Mattei, PEUGEOT’s chief designer, the exterior of the near five-metre-long 508 GT Fastback is without a doubt a gorgeous form to look at, and its origins lie in the brand’s EXALT show car that was unveiled in 2014. The styling of the latest 508 is sleek and modern, and it comes as no surprise that this latest generation has attracted a plethora of praise, as well as a large number of awards since its unveiling a couple of years ago.

The inspiration for the ‘face’ of this model was drawn from PEUGEOT’s rather extreme-looking INSTINCT concept, first shown to the world in 2017. The sabre-tooth-like LED daytime running lights, which illuminate when unlocking the car, are a standout feature, as is the large chequered grill that’s finished with an elegant chrome trim.

When peering at the side profile of this model, the 508 has some really nice touches, such as frameless side windows, which converge to a point showing the blue and silver HYBRID insignia. The stylish diamond-cut 18-inch five-spoke ‘Sperone’ alloys are both standard on the HYBRID GT and exclusive to the GT grade.

On to the rear, and the sporty nature of the PEUGEOT 508 HYBRID GT Fastback is emphasised through the twin chrome exhausts, the fixed boot lid spoiler and the striped and slightly futuristic trapezium-shaped ‘Claw Effect’ LED lights, which once again borrow some DNA from the EXALT concept. 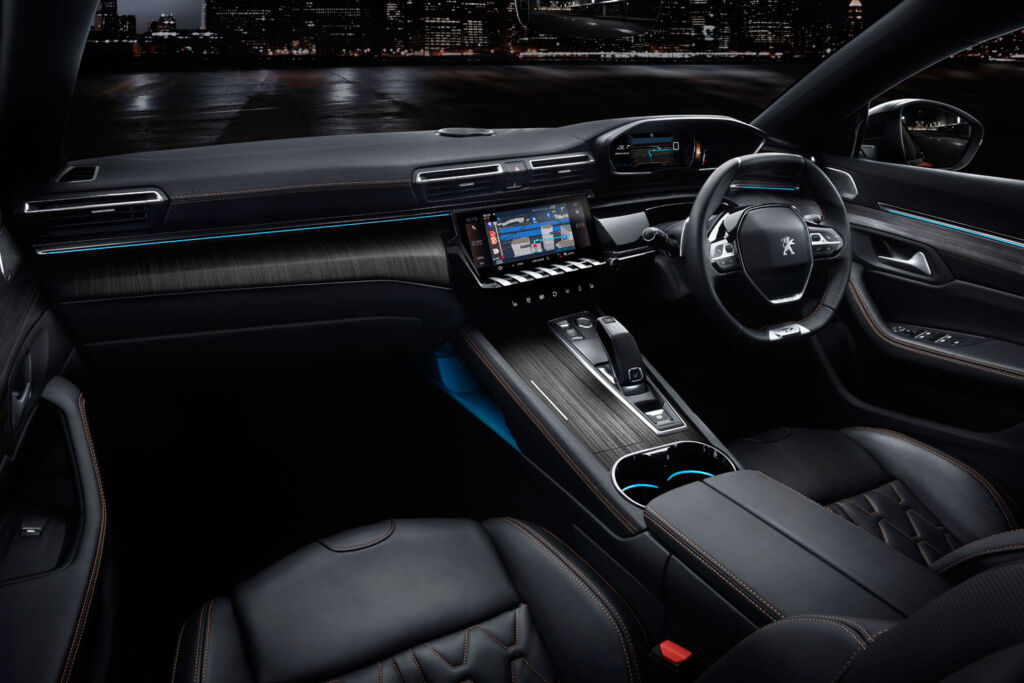 On the inside
Opening the driver’s door reveals PEUGEOT’s trademark i-Cockpit, the second generation of it in fact, after having first emerged in the SR1 concept a decade ago. There are no analogue dials in front of the driver (a feature which is fast disappearing), but a trapezium-shaped 12.3-inch display that houses the key information, such as the speedo, what mode you’re in, the fuel gauge and how much electric power is left from the 40-mile range.

This sits behind the rather bulbous GT-branded sports steering wheel, which is fully equipped with buttons for the phone and audio, amongst other functions. The chrome paddles are more like pressure pads than the more traditional levers, where you use your fingers to push and pull as you go up and down the gears at your own pace. 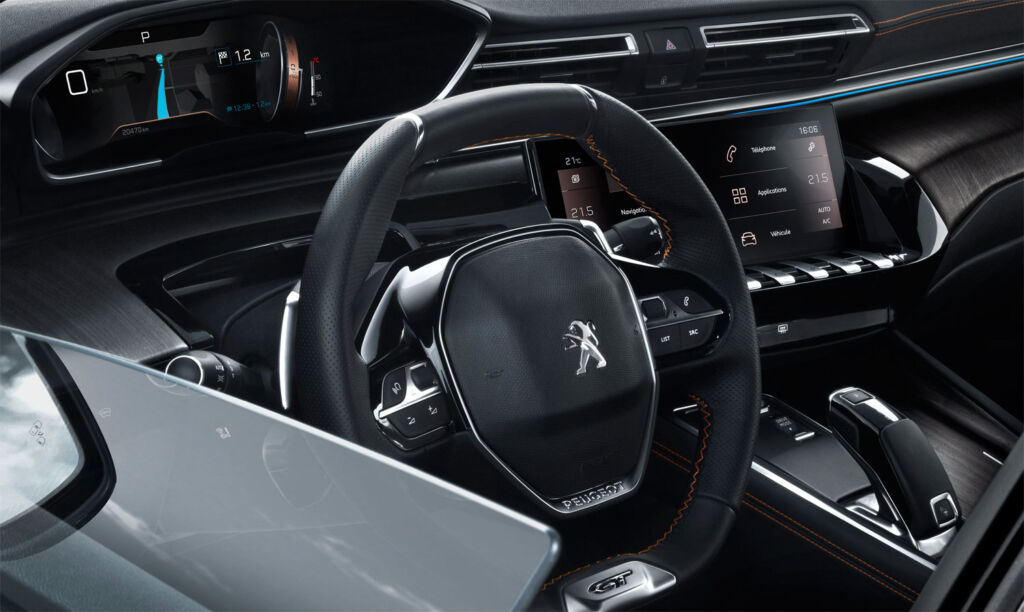 At the summit of the centre console is a 10-inch touchscreen, below which sits a neat row of seven piano key-like toggle switches to access the key functions on this interface (also used for the reversing camera), such as the e-SAVE mode, the satellite navigation, heating and ventilation, as well as the musical entertainment, which is provided courtesy of the FOCAL sound system that has a central circular speaker under the lower part of the windscreen as part of the setup.

According to the official blurb, the GT grade offers added luxury and style to the GT Line, and we’d be inclined to agree. The optional Nappa Red full-grain leather (£300) exudes sophistication and gives an upmarket feel, and is also a shade that’s not overly garish when combined with the smart Nera Black metallic exterior of our test car. The electronically-adjustable and heated seats are also very supportive and proved comfortable throughout our time with the 508.

There’s plenty of storage dotted around the cabin for odds and ends and drinks bottles. In addition, the interior of the central armrest, which houses a 12V power point, is fairly deep, and you can also store your phone and charge it with the USB sockets in the area just underneath the gear shifter. In addition, this car comes complete with numerous other mod cons that you would expect with a £40,000 price tag, such as air conditioning, rain-sensing wipers, cruise control, blind-spot monitoring and a lane departure warning system, which subtly tugs the steering if you veer across any white lines.

The standard specification is actually packed full of equipment, thereby offering buyers good value for money, and there are a fair few options to go alongside this. Our test car was fitted with the panoramic opening glass roof (£870 for the privilege), which floods the cabin with plenty of natural light and gives the interior a spacious feel, as well as £1,300 worth of night vision technology (we didn’t get the chance to try it to due to the long summer evenings), which uses an infrared camera in the front grille to detects the presence of people and animals up to a staggering 200 metres beyond the range of the headlights.

Considering there’s a high-voltage battery under the rear seats, there’s plenty of head and legroom in the back, and so, even with full occupancy, it shouldn’t feel at all cramped. The capacity of the boot, which can be accessed using the electric tailgate, is just as impressive with 487 litres to hand. This can be extended to 1,537 litres when the folding rear seats are reclined.