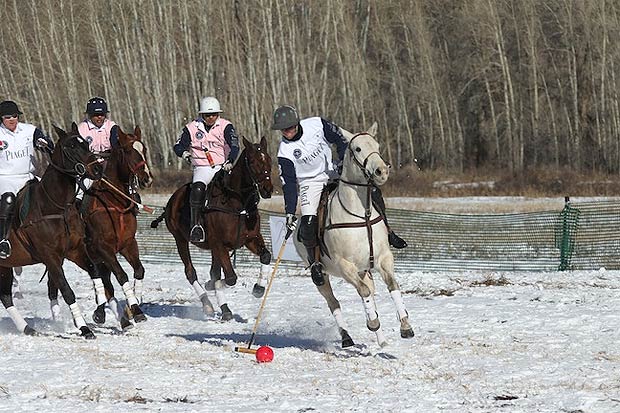 Considered by many to be the world’s most glamorous winter destination, Aspen was the setting for the 11th annual World Snow Polo Championship and a glittering holiday party hosted by Piaget and Audi.  The excitement began on Saturday, December 17th, when the Piaget polo team, featuring Piaget polo ambassadors Nic Roldan and Marc Ganzi, along with top-ranked Kris Kampsen, competed in one of the most celebrated events of the polo season.  This year’s championship saw fierce competition among some of the world’s leading players, including Nacho Figueras, Juan Bollini and Piaget polo ambassador, Jeff Hall.

The action off the field was just as intense, as the polo crowd and Aspen jet set enjoyed an endless round of parties. By far the most coveted invitation of the weekend was the late night bash thrown by Piaget and Audi in honor of Pathfinders International.  Held at the breathtaking mountain retreat of Elliott and Donna Slade, the soiree attracted a high power mix of socials and celebrities, including ‘Twilight’ heartthrob, Kellan Lutz, ‘Star Trek’s,’ Zachary Quinto, and Chris Diamantopoulos, star of the upcoming ‘Three Stooges’ release.  The Hollywood gents were joined by Paris and Nicky Hilton, Nacho and Delfina Figueras, Jamie Tisch, Lita Heller, Amy Phelan, Marc and Melissa Ganzi and Jenny Kennedy among others.

Piaget’s Polo FortyFive timepiece was the accessory of choice for nearly every polo player in attendance, while Donna Slade dazzled her guests in a Piaget Rose white gold and diamond ring with matching earrings.  The crowd sipped cocktails in the Slades’ billiard room which had been transformed into a Piaget Polo lounge, and then danced to the music of DJ Pesce until well past midnight.  VIP guests departed in a fleet of chauffer-driven Audi A8s, complete with cashmere blankets from Piaget to keep them warm on the ride home.