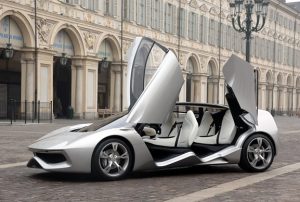 With supercar forms and cutting edge technology, the Pininfarina Sintesi, their vision of the car of the future was exhibited along with other masterpieces of Italian car design for the 100th anniversary of the Car Coach Builders Group

The Pininfarina Sintesi concept was among the masterpieces of Italian car design exhibited at the Officine Grandi Riparazioni of Torino on the occasion of the exhibition set up by ANFIA for the Centenary of the Car Coachbuilders Group, which is open until June 5th.

The four door, four seat sports GT originally unveiled by Pininfarina at the 2008 Geneva Motor Show won the “red dot award 2008” in Singapore for “the excellent quality of its design and the outstanding innovation of its technological content”.  The Pininfarina Sintesi was chosen by the judges of the red dot award – from over 1900 concepts from 48 nations – for encapsulating the essence of the car of the future in its sleek and aerodynamic silhouette. While not a study in beauty as an end in itself, the Pininfarina Sintesi pays more than just lip service to aesthetics, which are enhanced by uniting the interior and exterior in a design that shapes the mechanics.
A combination of fuel cells, drive train components and batteries – around the requisites for space and safety of the occupants, the true protagonists of future automotive scenarios, together with the car itself, envisioned as part of a vehicular network interconnected by a decentralised intelligence system devised to create a new harmony among cars themselves and between cars and the surrounding environment. 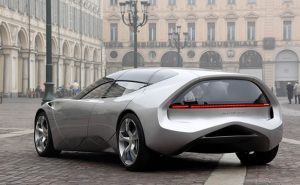 The exterior design of the Pininfarina Sintesti can best be summed up by the following: ‘The line, the form must become substance,living material’. The basic theme of the Pininfarina Sintesi contains a continuous looped surface that starts from the front wing, stretches along the side of the car, blending into the rear fender and then around the side window to dive back under the front wing. The surface of the Sintesi is like a Moebius ring, uniting the inside and outside of the car.
The four doors on the Pininfarina Sintesi open independently, the specific design and shape of the doors offers great much accessibility to the car. Unlike traditional motor vehicles, the design of the front looks scooped out consisting of a relatively thin upper and lower wing withthe laminated radiator integrated with the surface. The rear design is a pure application of a Pininfarina theme: the ‘coda tronca’. The aerodynamics under body and the ‘coda tronca’ allows the Pininfarina Sintesi to have an incredibly low CX value of 0,272. The rear lighting cluster incorporates not only the newest LED Osram technology but also cameras and sensors and visually connects the rear to the side by underlining the central axis

The interior of the Pininfarina Sintesi

The interior is not conceived as a separate element but is fully integrated with the overall design of the Pininfarina Sintesi. The wonderful layout of the instrument panel designed as a single integrated semi transparent piece, deriving its richness from a sophisticated play of light that serves as a visual and intuitive feedback for the various different functions. The single, seamless line of the exterior flows back into the interior environment where the forms are created around man. The idea of the Pininfarina Sintesi interior is to wrap the human elements within soft, fluid space. This cossetting environment starts from the windscreen crosses the dash and floor, traverses the seats and slips down into the four doors which open upwards.