Arriving in showrooms this month, the new Porsche 911 has already clinched a top motoring magazine award, adding a further trophy to the 2011 collection already awarded to the Porsche 911 GT3 RS 4.0, Cayman R and Boxster this year.

The new Porsche 911 has been awarded Coupe of the Year 2011 by Top Gear magazine. Top Gear Magazine commented: “…all things considered – its price, its performance, its economy and its emissions – it’s pretty clear we’re talking about the world’s best sports car here.” True to the 911 tradition, the new model combines a powerful rear-mounted flat-six engine with the iconic 911 silhouette and adds more power and efficiency, less weight and a host of new technologies to further enhance the sports car driving experience. 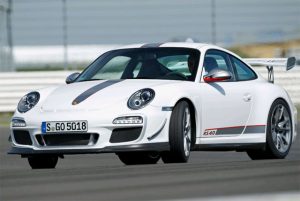 The Porsche 911 GT3 RS 4.0 won first place in EVO magazine’s Car of the Year contest. When awarding the Porsche GT3 RS 4.0 the accolade EVO said : “The GT3 RS 4.0 is a pure driver’s car with a quite extraordinary naturally aspirated engine at its heart. To feel and hear this 4-litre flat-six pull from idle to its 8,500rpm red line is almost worth the asking price alone but, as ever, Porsche also provides a pretty handy and engaging chassis so that you’re encouraged to take it out and exercise it.” The 911 Porsche GT3 RS 4.0 brings together in a road car all the attributes that have made the Porsche 911 a regular winner on the race track. Producing 500 hp, equivalent to 125 hp per litre, the 4.0-litre engine is largest and most powerful naturally aspirated engine ever featured in a 911. This can propel the Porsche 911 GT3 RS 4.0 around the Nürburgring-Nordschleife circuit in 7:27 minutes.

Autocar declared the Porsche Cayman R as Britain’s Best Driver’s Car for 2011, after winning the annual contest run by the magazine. The comparison pitched 11 of the year’s greatest new cars against each other on the public road and race track to determine which one provides the greatest thrills for its driver. The magazine commented: “The Porsche Cayman R’s steering is about as sweet as it gets and the ride is 150 times better than it has any right to be considering how little body movement there is when you’re really going for it. Right now this car is as good as it gets when it comes to pure driver satisfaction. And that’s saying something when the opposition is as good as it is.” With a weight of just 1295 kg and its characteristic flat six 3.4-litre engine tuned to develop 330 hp, the Porsche Cayman R embodies the lightweight, mid-engined sports car concept, offering a precise and engaging driving experience.

The Porsche Cayman R also completed a double triumph by shining in CAR magazine’s ‘Best Sports Car 2011’ feature. Nine cars were thoroughly tested on road and track, and the responsiveness and chassis of the Porsche Cayman R shone through. CAR magazine said; “It feels so right: light, responsive, balanced. What’s really amazing is that it takes an almost binary discipline and fills the gaps with nuances of feel and progression…It’s intuitive and fluid and brilliant….”

Porsche Boxster – Used Sports Car of the Year, What Car? 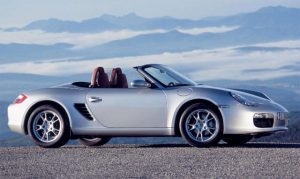 Due to the excellent build quality which has been recently highlighted by us in a previous article, Over 3 quarters of all Porsche sports cars ever built are still on the roads, and a pre-owned car is a perfect way to enter the world of Porsche. The Porsche Approved programme offers a wide choice of models in a variety of specifications to suit personal preference, each offered with the peace of mind of a two year warranty and the assurance of a thorough check-over by Porsche. What Car? magazine commented that the mid-engined Porsche Boxster “proves that great cars don’t have to come at great expense. It’s fast when you want some fun, yet comfortable and refined when you want to take things easy…..A super-stiff chassis means the Boxster remains rock solid with the roof down, while the revvy 245 hp 2.7-litre engine is a joy, with a great soundtrack……The Boxster is a full-blooded sports car and amazing to drive, but not so raw that you can use it only at weekends.”