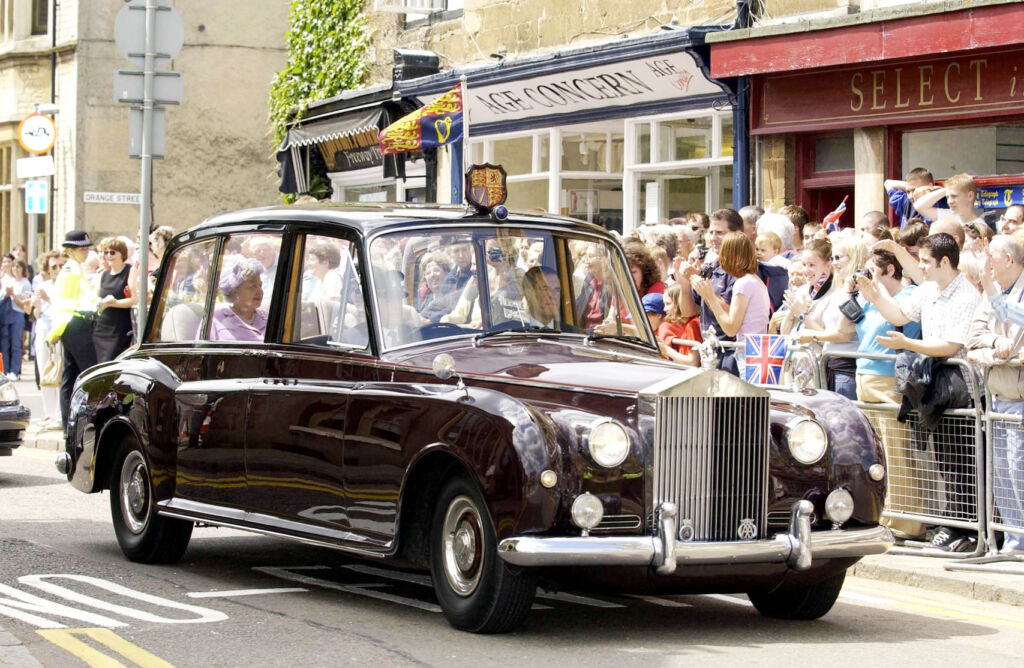 The sad passing of Queen Elizabeth II has stirred memories in everyone who has had the slightest contact with Her Majesty. In this special feature, Jeremy Webb looks at some of the vehicles that accompanied her during her long reign and recalls his childhood experience of seeing her in person.

My first recognition of the importance of Queen Elizabeth II was when I was a Cub Scout and was informed that she would be visiting my home town. I had sworn an oath to her when joining the Cubs, but I wasn’t fully aware of what this meant and what the role of a Monarch was. It wasn’t until the Scout Leaders sat us down and told us about her life of service to the nation prior to her coming to open our Community Centre that I began to understand.

We were lined up outside the new Community Centre, a hundred or so Cubs and Scouts from various packs around the town. I don’t remember seeing much Police around, certainly nothing like what you’d see in these times; I remember the excitement of seeing the cavalcade of motorcycles and cars that appeared. My passion from a young age was motorcycles and cars, so I was in awe at the BMW bikes the Police had and the beautiful cars the Queen and others turned up in. When she exited the vehicle, applause rang out, coupled with frantic flag waving as she walked through our Guard of Honour.

Queen Elizabeth II and Cars
Queen Elizabeth II is no stranger to motor vehicles, having trained as a mechanic and driver during World War II, which resulted in her getting behind the wheel of a variety of vehicles. The passion for cars never left her, and she loved driving herself whenever she could. Iconic British models were her favourite, including the Land Rover Defender, which she enjoyed taking off in around Sandringham and Balmoral, and she was often seen in a racing green Jaguar XE when off-duty. 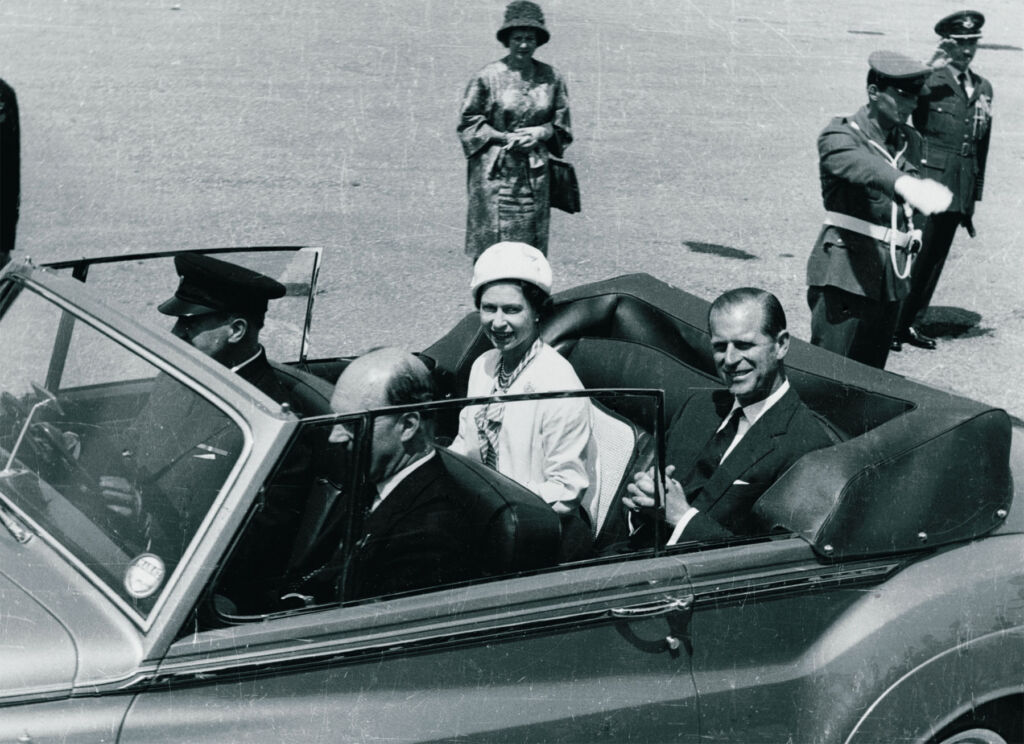 The passing of Queen Elizabeth II has brought out memories, and like me, Neil Arman, Director of Leicestershire-based Flying Spares, remembers the cars used by the Monarch, most notably Rolls Royce and Bentleys.

From her appointment as Queen in the 1950s, her car used for ceremonial events and daily transportation to functions were the Rolls Royce Phantom IV State Landaulet. I was surprised that the Head of State, since 1952, had few actual cars for ceremonial duties, perhaps a nod to sustainability or just devotion to favourites, but the vehicles she used at the start of her reign were the ones she still used to her final days. They were seen during the many parades of her coffin on its journey from Balmoral to London.

Rolls-Royce Phantom IV.
The oldest in the fleet, the Phantom IV, was built 65 years ago, the most exclusive Rolls Royce model ever produced. The Phantom IV is one of the most elite cars in the history of motoring. Eighteen were built between 1950 and 1956; seventeen were sold exclusively to royalty and heads of state. Sixteen are currently preserved in museums, private and public collections. 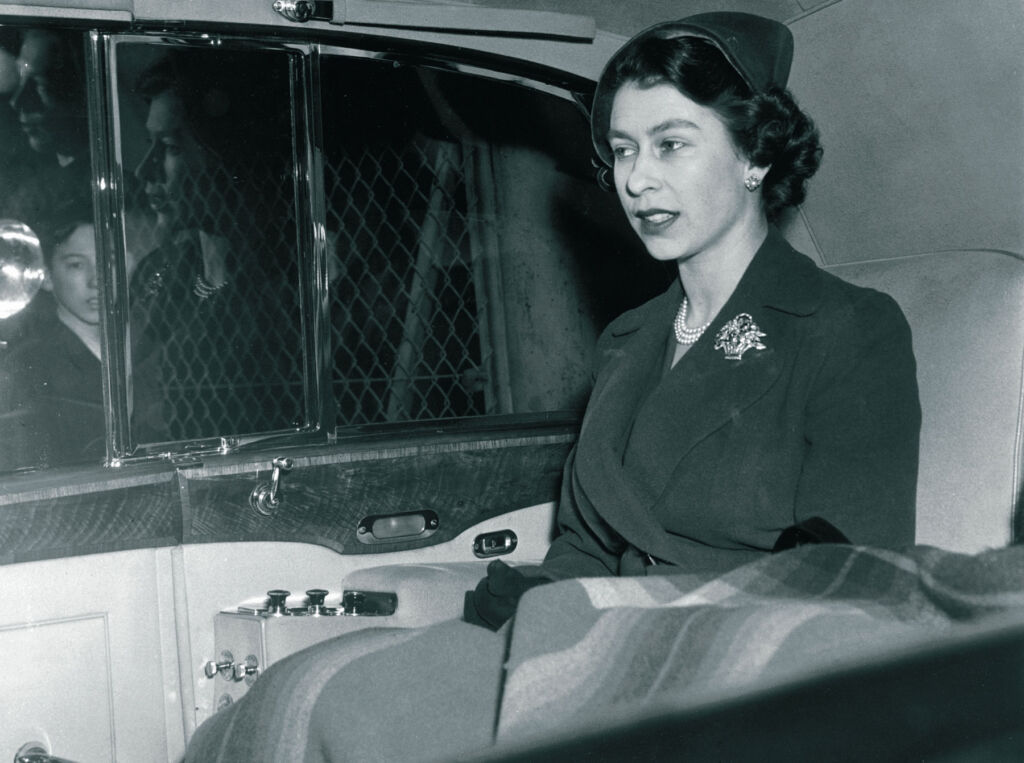 A public announcement said the Phantom IV was “designed to the special order of Their Royal Highnesses, Princess Elizabeth and the Duke of Edinburgh” when it was delivered in July 1950. Queen Elizabeth II continued to make trips to Ascot until 2021, but its first outing took place on 10th April 1952, taking the Queen to Westminster Abbey.

Bentley Motors.
Bentley, the iconic British marque, is synonymous with racing and was Ian Flemming’s original choice for James Bond in the first books. Many members of the Royal family own Bentleys, and they have been on the Royal fleet for decades.

The Bentleys used were huge, measuring 6.22 metres long, with a wheelbase 1.4 metres longer than an average family-sized vehicle. The cars also had extremely powerful engines, but thankfully, they were never publically put to the test. Like any other vehicles on processions, the Bentleys would travel at around nine miles per hour and sometimes even as slow as three mph.

The cars were upholstered in Hield Lambswool Sateen cloth, with the rear seats being slightly different thanks to the addition of a light grey Connolly hide. The carpets are pale blue in the rear and dark blue in the front. 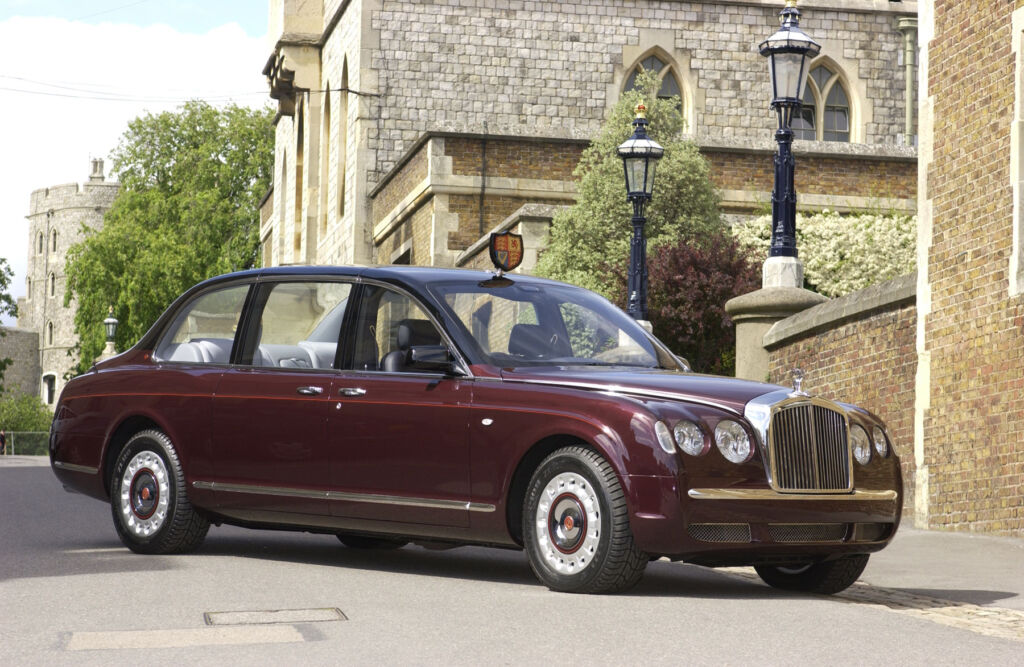 Queen Elizabeth II, on most occasions, travelled in State cars which are regal as the Queen herself and have a pedigree and heritage—solely driven for public events and ceremonial occasions like the trooping of the colour and the opening of Parliament. State cars have a particular brief; they must transport their passengers in a safe, efficient and dignified style, allowing as many people as possible to see The Queen or other members of the Royal Family.

The Duchess of Cambridge was driven to Westminster Abbey in a Rolls Royce Phantom VI for her wedding to Prince William. The model was presented for the Queen’s silver jubilee in 1977 by the Society of Motor Manufacturers and Traders. William then drove kate to Buckingham Palace in a vintage Aston Martin DB6. 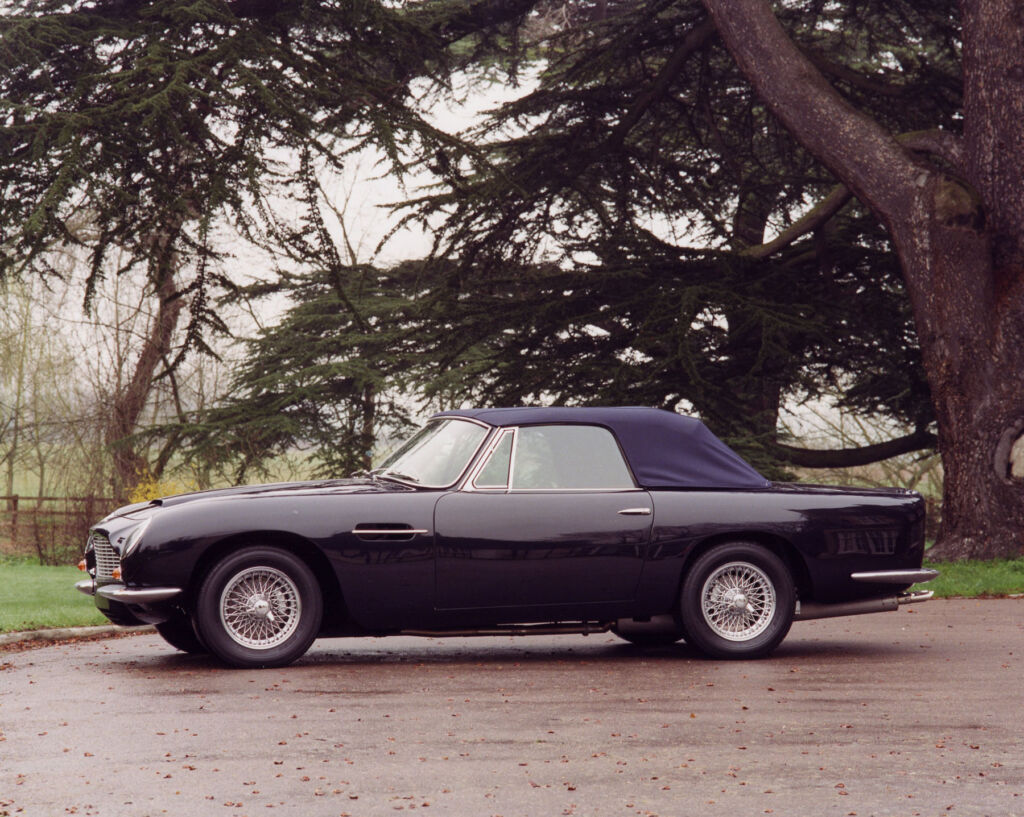 The newest vehicle was presented to Queen Elizabeth II to mark her Golden Jubilee in 2002. A Bentley-led consortium of British motor industry manufacturers and suppliers created a one-off design with input from The Queen, The Duke of Edinburgh and the Royal Household’s Head Chauffeur.

Neil Arman of Flying Spares, the world’s largest independent Rolls-Royce and Bentley parts supplier, brought to my attention the prestigious, longstanding connection between the Royal family and the two iconic marques.

Neil mentioned some anecdotes about the Queen’s connections with her vehicles. He said, “Queen Elizabeth II’s affinity for Bentley and Rolls-Royce motor cars is well-documented, and the last week has seen the retelling of many beautiful stories. My favourite is that when in use by Her Majesty, the Spirit of Ecstasy mascot on the Phantom VI presented to her by the British Motor Industry in 1977 was replaced by a model of Saint George slaying the dragon.”

He continued, “I’ve seen great in-depth features on her 1955 Rolls-Royce Phantom IV State Landaulet, 1980 Rolls-Royce Silver Wraith II and 2002 Bentley State Limousine, and there have been some lovely motoring picture montages too. One of my favourites is a black and white photo of five Rolls-Royces belonging to The Queen parked outside The Royal Mews on the grounds of Buckingham Palace.”

About Flying Spares
Ben and Lucy Handford Established Flying Spares in 1995; it is now the world’s largest independent supplier of new, recycled and reconditioned Rolls-Royce and Bentley parts. Flying Spares is synonymous with an exceptional commitment to sustainability, quality and preserving original Rolls-Royce and Bentley engineering. Initially operating from a single portacabin, the business has grown yearly. It now employs over fifty people at a 30,000 sq. ft. facility in Leicestershire, operates 24/7 and distributes worldwide. Recent developments include:

Thank you to Rolls-Royce Motor Cars, Bentley Motors and Neil Arman of Flying Spares for supplying the images. 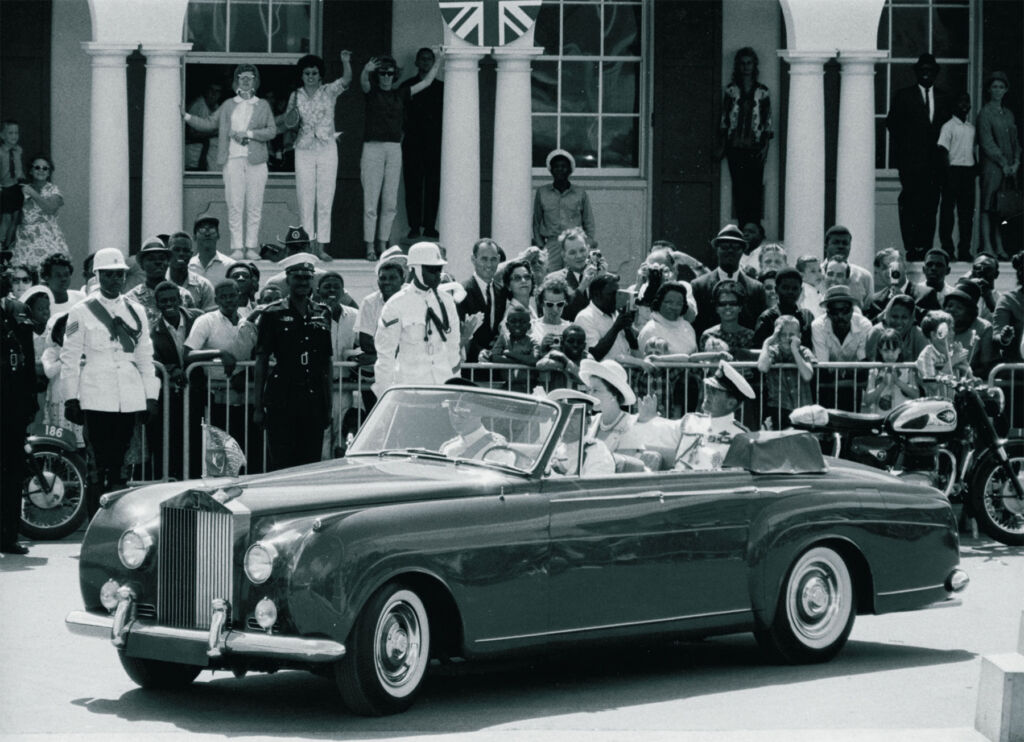