Since Britain’s first curry house appeared in 1809, the UK’s love affair with Indian food has continued with relish. Fast forward 200 years and the cuisine is our national dish. Increasingly chefs at Indian restaurants are creating more refined Indian dishes with less heavy sauces, less ghee and as a result, are attracting a loyal crowd.

A case in point is Kahani, the new kid on the Chelsea restaurant scene. Open just six months and already garnering positive press, this intimate Wilbraham Place Indian restaurant is well patronised by locals (a stone’s throw from Sloane Square) and has swiftly become a destination restaurant for lovers of sophisticated Indian cuisine. 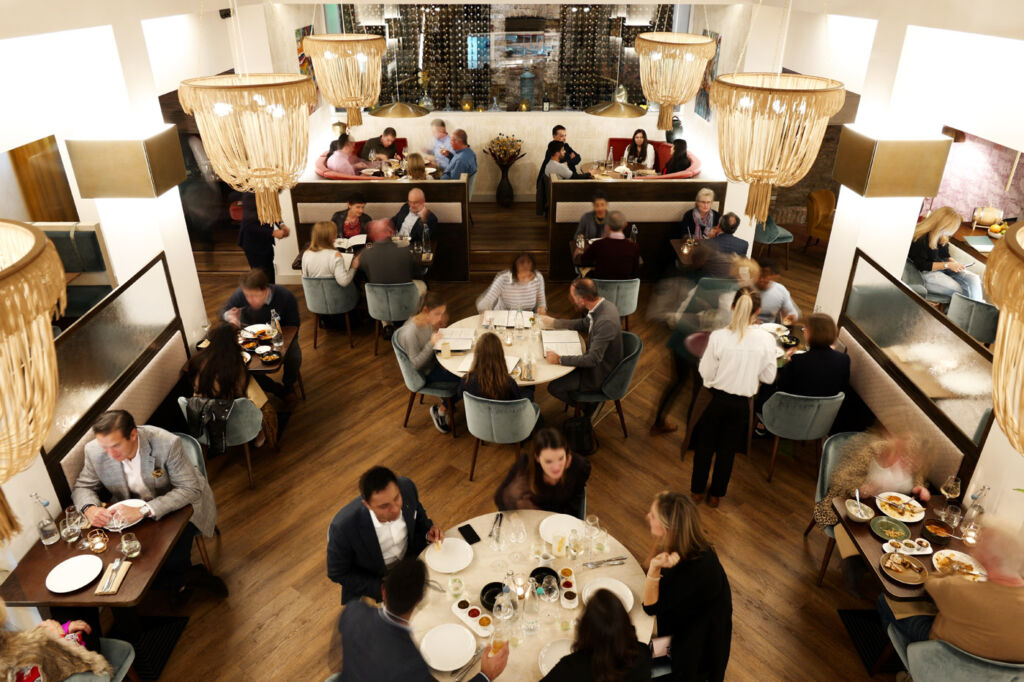 Kahani enjoys an intimate subterranean setting with 80 covers (formerly home to Canvas and Le Cercle) including a private 10-cover dining room on a mezzanine level above the main dining tables. The space is sophisticated yet welcoming with a semi-open kitchen and a vast wine cellar visible behind glass panels. I receive a warm welcome from the concierge who takes my coat and guides me downstairs to the restaurant.

Kahani means ‘story’ in Hindi, its Michelin-starred co-owner and Chef Patron Peter Joseph tells me at the bar. 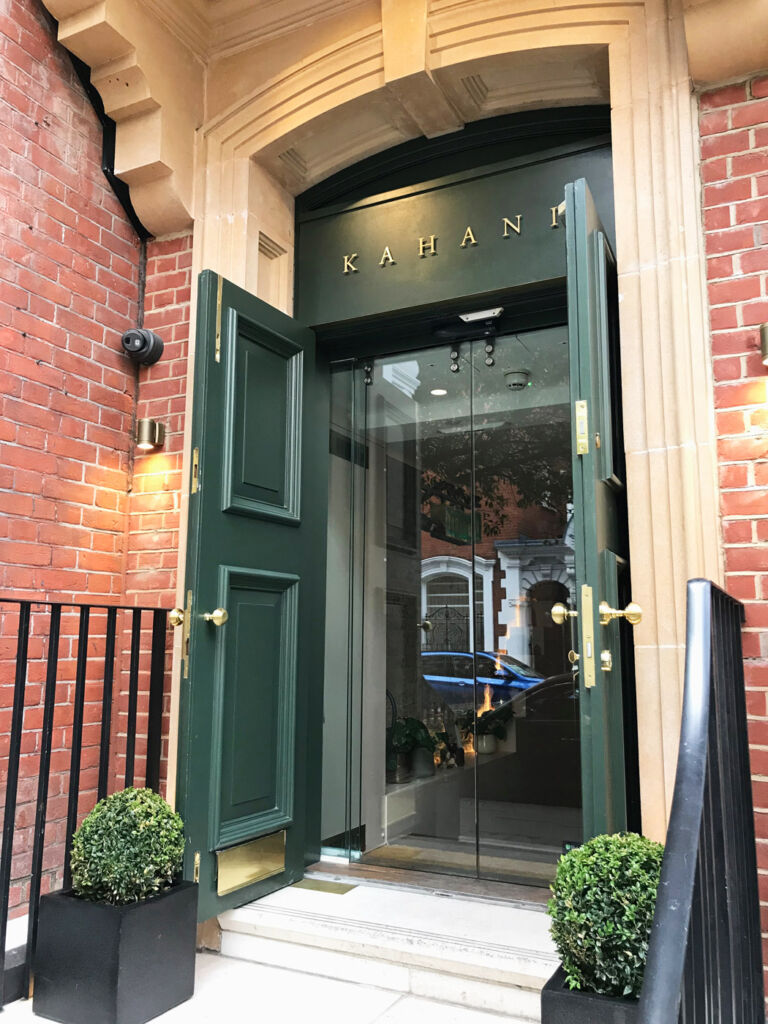 “It’s my first restaurant – we’ve been open six months now to a great reception. My idea was to show diners that Indian food doesn’t have to be full of heavy sauces. So we focus on light dishes, grilled meats; fish and vegetables from the robata grill as well as tandoor.”

Peter began his UK career at Tamarind in 2005 and left last year. “A great time, a great place to learn, and a fabulous place to work. From 2011 onwards I was head chef.” In Peter’s case that makes nine years as a Michelin-starred chef; considerable experience in management and cuisine that he brings to Kahani.

Peter looks more like a yoga teacher than a chef. He’s only 20 minutes from service yet incredibly relaxed.

Does ever lose his cool in the kitchen? “No,” he smiles. “There’s no point and that’s not my style. We have a calm kitchen. It’s due to good training.

“For sure, there’s lots of pressure in the kitchen, but I’m a very calm chef. Everyone knows what they are supposed to be doing. And they get on with it.

“I find yoga helps me focus and relax, so I apply the same discipline in the restaurant. My Dad used to teach me in childhood. He’s nearly 80 now. Still does yoga back in India.”

I’ve heard his mother influenced his choice of career? “Actually she did,” Peter recalls. “My cooking basics come from my mum. Both my parents are teachers, though. They were worried when I joined hotel management. But they are very proud of me now.

“My mum would pack my lunch for school. A tiffin box with rice, lemon tamarind, breads with meats, rice pancakes and dosha spiced potato. She’s a great cook. I love her lamb curries.”

Did she teach you? “No. I just watched her,” Peter reveals. “Then I watched TV chefs. I loved the white uniform. In my pre-teens my friends and I stole ingredients from mum’s kitchen. Tamarind cumin, etc and we’d make a dish. Four or five guys at the age of 12. It was our way of having fun and socialising – and eating well. That’s when I really fell in love with food. Then I learned my mum’s recipes. After that I studied hotel management for three years in India with a focus on food production.

“I worked with the Residency Group of Hotels in India then moved to London in 2004. Tamarind started in 2005 and I was invited to join them. I left last year and quite miss my brigade there. We were so proud to win the Michelin star – it took a long time. So I’m hoping that Kahani will perform just as well.”

Is there extra pressure to perform when you have a coveted Michelin star?
“Maintaining the star brings extra pressure, but I’m used to it,” says Peter. “We are aiming for another star here.”

I notice the fabulous wine wall at the back of the restaurant. “That was already here,” Peter explains. “But we’ve redesigned everything else, including the private dining room on the mezzanine, which we call our peacock room due to its green and blue hues.”

What makes Kahani stand out? “Our main aim is that each customer feels well looked after from the time they arrive to the time they leave,” Peter tells me. “This is fine dining with a casual flavour; ideal for sharing whether it’s business meetings or a meal with family and friends. We encourage people to enjoy a selection of small sharing plates and connect. We want people to chat with each other. Not spend time on their mobiles.”

Ingredients are seasonal and British where possible, and portioned for sharing. Traditional flavours demand that all the senses are involved. What is Kahani offering that’s different to Tamarind?
“At Tamarind the menu was more traditional – curries and so forth. The spirit of Kahani is light, contemporary Indian food, made with seasonally sourced fresh ingredients. We use very little ghee and always traditional spices – not fusions! I feel fusion is always confusion!

“Grills are the main focus at Kahani. We marinade the meats. And we make up our sauces fresh, not bought in bulk like some restaurants. Our meat is always fresh. Not frozen and reheated.

Where is the meat from?
“Our meats are from different suppliers: mainly UK lamb from Somerset and venison from Kent. Our chickens are organic and grass fed. We have Scottish salmon, and the jumbo prawns are from Indonesia. I visit Billingsgate market twice a week to select the best fish. Having lived in London for 15 years now, I know the suppliers very well. We never use imported meat; it’s all organic and sourced locally.”

What food did he grow up with? “I’m originally from Chennai on the Bay of Bengal in eastern India. So we had lots of seafood and steamed dishes which I still enjoy.”

His favourite meal on the menu? “I love our signature dishes like the prawn tandoor: Malabar prawn, coconut green chilli curry leaves and broccoli. It’s very popular. Lamb chops with Punjabi spices grilled in tandoor is also a favourite. And we have duck and game on the menu mixed with spices such as fennel, cinnamon, ginger and garlic. There are only a few curries on the menu, including Rogan josh. We cook our lamb on the bone so it holds its flavour. Our Biriyanis are also popular.”

The Day of the Dead Celebrations at Chotto Matte Soho