Udo Lindenberg – “The Porsche boys will swing this thing”

At the Porsche press conference held on the day before the Porsche Carrera World Cup and the Nürburgring 24 hour race, Porsche head of 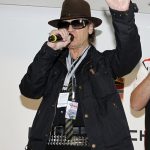 motor sport Hartmut Kristen and Porsche works driver Timo Bernhard fielded questions from journalists. Joining them in the Porsche Media Lounge at the Nürburgring were Melanie Snow and Craig Baird, the drivers of the VIP-cars at the Porsche Carrera World Cup – and as star guest, rock legend Udo Lindenberg. This is what Craig and Udo said…

Craig Baird about the Porsche Carrera World Cup: “I’ve won 109 Cup races by now, and everyone of course asks me whether this fantastic race will be the 110 th. To be honest, even for me as an experienced pilot, it’ll be very difficult to match the boys who have grown up on this circuit. I was last here three years ago and I have turned just four laps in practice. Four laps in three years – that’s not exactly a lot. But I’m very much looking forward to the race and I’m proud that Porsche AG has entrusted me with the VIP-car.”

Udo Lindenberg on the 24 hour race and the fascination of Porsche: “I bought my first Porsche in 1973 in Hamburg and spent all of my earnings from my first big gig. I’ve never regretted it, on the contrary: For me, Porsche embodies passion in its most beautiful form and I’m pleased 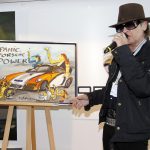 that Porsche also leads in environmental matters with the hybrid car. We have to get the emissions down, that much is certain. And of course I hope the car wins the race. This is my first time here and I find it totally awesome. I’ve got my fingers crossed for the Porsche boys, they’ll swing this thing.”

At the press conference, Udo Lindenberg unveiled his own painting with the Porsche 911 GT3 R Hybrid, entitled: “Porsche Panic Power”. This painting will be auctioned on the Internet under www.porsche.com with the proceeds going to the Udo Lindenberg charity for child aid projects in Africa.