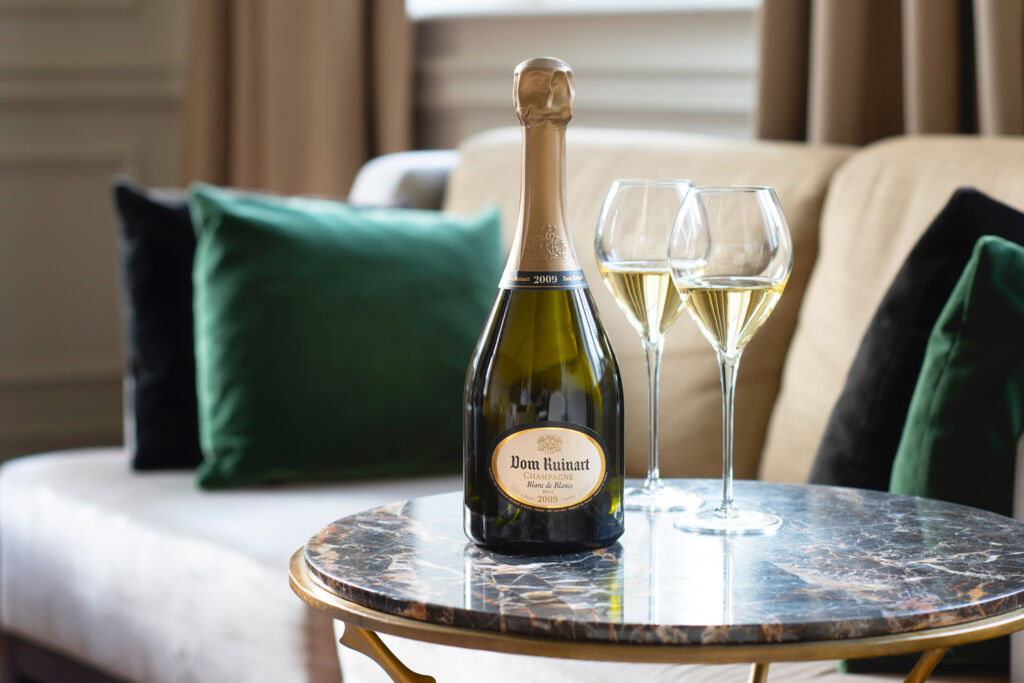 Say the words ‘Dom’, and ‘Champagne’ and chances are, most people will add the word ‘Pérignon’. There is, however, another famous Benedictine monk, well-loved amongst wine geeks and wine lovers, that deserves a little more attention. Helena Nicklin takes a closer look at the iconic, vintage champagne from the House of Ruinart: Dom Ruinart.

Who was Dom Ruinart?
Around the time of Louis XI in the seventeenth century, there lived a Benedictine monk known as Dom Thierry Ruinart. He was a more worldly monk than some, deciding to leave home at the age of 23 to go and study at one of France’s most eminent centuries of learning: the Abbey of Saint-Germain-des-Prés, just outside Paris.

It was here that he was exposed to another side of life, notably amongst the young aristocrats of Paris who were starting to drink an exciting new ‘wine with bubbles’.

It’s a wonder that Dom Ruinart wanted to come home, but come home he did, to the region’s wine cellars including Hautvilliers, where he worked alongside another monk named Dom Pérignon (you may have heard of him).

Together, the two worked to improve the methods used for wine production, including fixing the problem of wine bottles exploding under pressure during the fermentation process used to make sparkling wine. 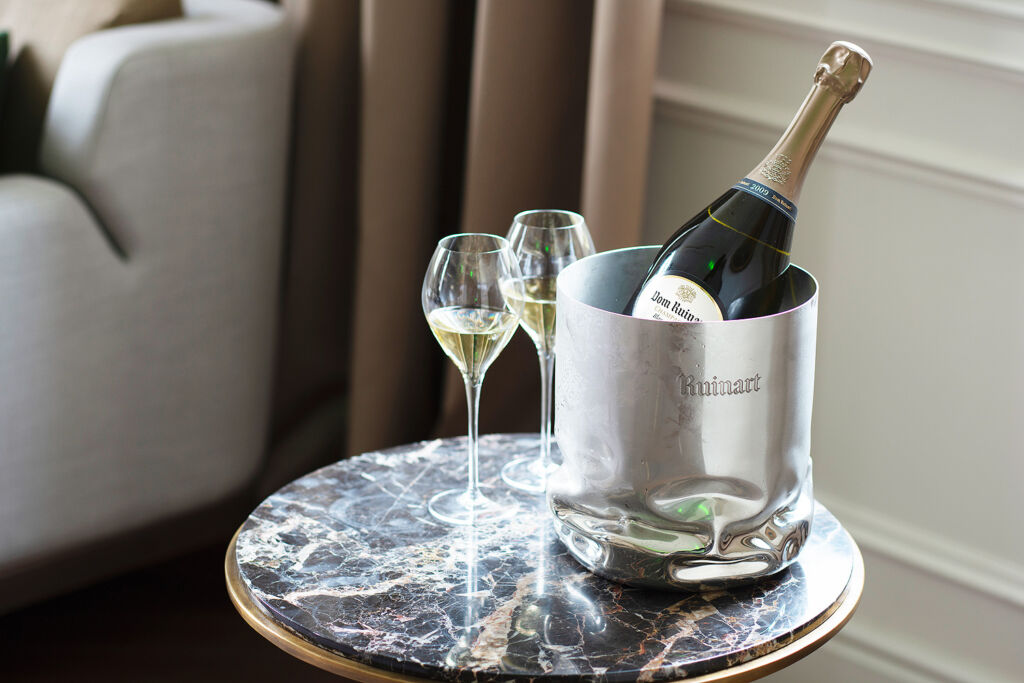 The House of Ruinart
Dom Thierry passed his interest in oenology onto his nephew Nicolas Ruinart, who managed to realise his uncle’s dream in 1729 by founding the first official Champagne house: Maison Ruinart. It was perfect timing; Louis XV had just authorised the transportation of wine in bottles rather than just barrels (in Champagne, the bubbles are created in individual bottles), and this meant that bottles of Ruinart’s ‘wine with bubbles’ as it was still known, could be sold and sent out far and wide.

At the time, the Ruinart family were known as cloth merchants, and their first bottles of wine were sent as gifts to the businesses that purchased the cloth. Within six years, however, the family ceased to trade cloth in order to focus solely on wine production, thanks to the immense success of their sparkling wine. 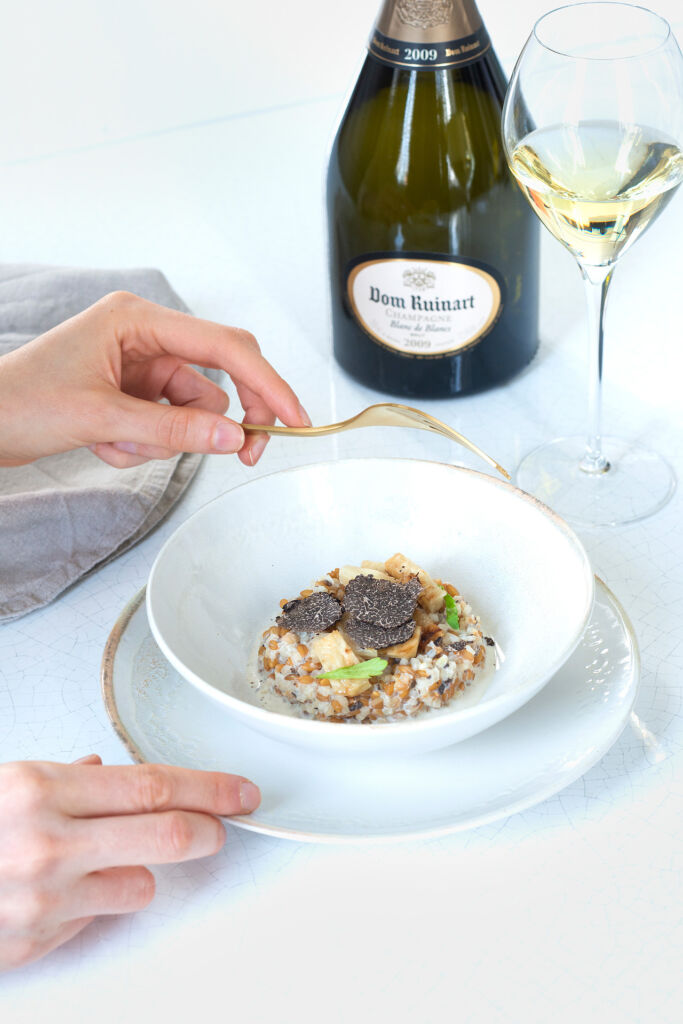 First released with the 1959 vintage, cuvée Dom Ruinart, named in homage to Dom Thierry and his vision, is the prestige cuvée of the house.

It’s a Blanc de Blancs, made solely from Chardonnay grapes grown in Grand Cru vineyards and produced only in exceptional years (vintages) when all the conditions are right.

Each of these famous vineyard plots is praised for the individual characteristics they give the Chardonnay grown there, from longevity and power to linear minerality and finesse.

The wines are expertly blended by Chef de Caves Frédéric Panaiotis then kept on their lees (the dead yeast cells left after fermentation) for a minimum of eight years before release, which helps give Dom Ruinart its characteristic weighty, creamy, toasty richness.

The house’s most recent release, Dom Ruinart 2009, marks a 50-year milestone since their first vintage year and the 26th vintage wine they have made.

It is drinking beautifully now with notes of citrus, bee pollen, almond, apricot, candied pineapple and white flowers with a slick of lime, but it is only just getting going. This wine will age another fifteen years easily if stored correctly in a cool, dark place.

Dom Ruinart 2009 Food Pairing
This champagne is the ideal accompaniment to hard, aged cheeses and mild truffle flavours, as well as poultry with fennel and even orange. Scallops and cauliflower with roasted hazelnuts is another explosive flavour combination. 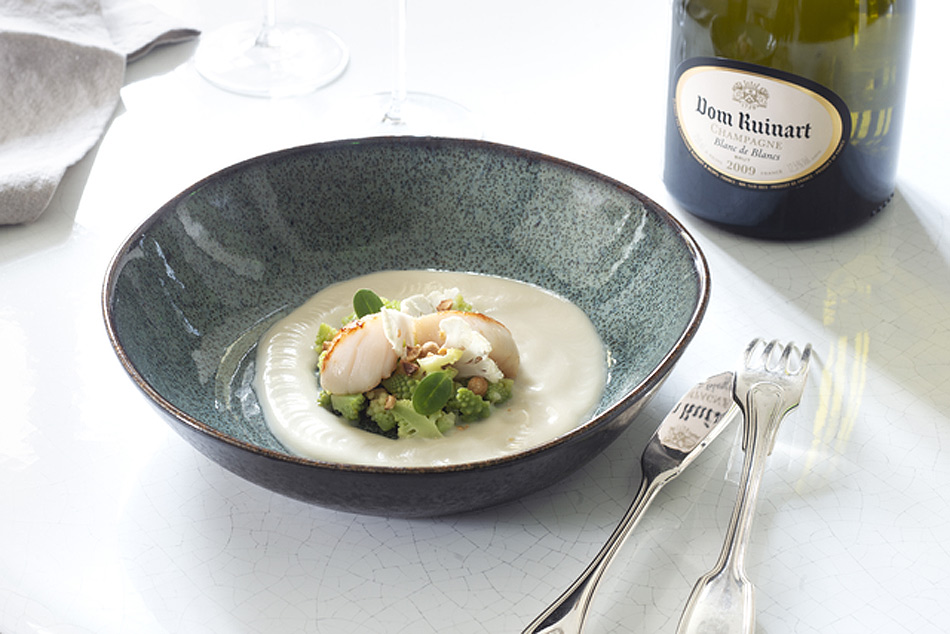 If you fancy recreating a recipe devised by the Ruinart team with Valérie Radou, the recipe for their celeriac and spelt risotto with black truffle is on their website, ruinart.com.

Find Dom Ruinart for circa £156 at various retailers, including The Finest Bubble, Millesima UK and Clos19.com.