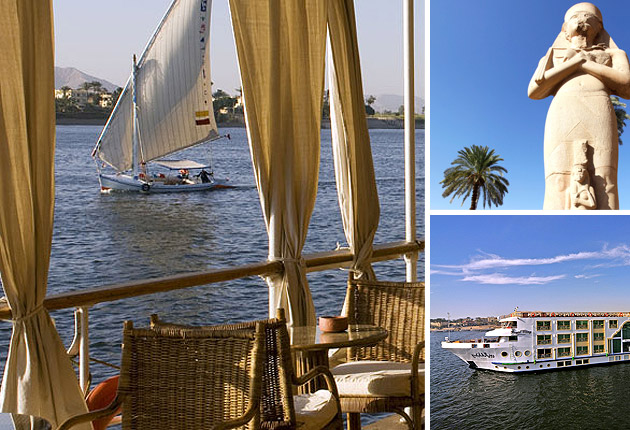 Sabi Phagura heads over to Egypt to view the incredible sights in Luxor and Aswan by boat, learning about its incredible history.

This is part two of the travel feature, to read the first part please click here.

Back to temples, we headed off to see the spectacular Temple of Horus at Edfu. And the word ‘spectacular’ is not used lightly here. Just when you think you’ve seen the delights of Egypt, you encounter another awe-inspiring structure with an incredible story behind it brought to life by the incredible Akhmed. This is one of the best-preserved temples in the country. The inscriptions on its walls provide important information on language, myth and religion. In particular, they provide details of its construction and perhaps most importantly the scenes of the conflict between Horus and Seth.

Back on the vessel, sailing along the timeless Nile towards Aswan is in itself quite a journey. The scenery as we sail appears unchanged for millennia compared to the modern city of Luxor. We pass sugar canes, donkeys, water buffalos, farmers and folk wearing long grey robes wandering around in their several shabby villages. And as the sun sets, you see the many mosques in the backdrop and hear the distant call of the prayer.

Aboard the Royal Viking, you can expect a good selection of food served at regular intervals throughout the day. From fresh fish and meats cooked in traditional spices to light salads and fruits. The cabins are comfortable and clean and you can always expect to find a fascinating towel creation to come back to at the end of a busy day visiting monuments.

In Aswan, there are excursions to the High Dam, the granite quarries and the Unfinished Obelisk. Discovered in 1922, the obelisk lies horizontally in its unfinished state. Had it not cracked, scuppering its completion, the Obelisk would have today been the biggest in the world standing at 42ft.

A boat ride to the Temple of Philae on Philae Island is a must and I’m pleased it was included on our tour. The approach by water is simply beautiful. The temple seems to rise out of the river reflecting itself in the clear water. The temple has several shrines and sanctuaries including Pharaoh’s bed. It’s difficult to imagine this magnificent temple was almost lost when it became submerged after the first Aswan dam was built in 1906. It wasn’t until the seventies that many nations attempted to save the Temple and it was reopened.

With the vessel moored at Aswan, we took the opportunity to take a walk around the city. With the weekend starting on a Thursday, it was a busy night with families roaming the streets for the evening. It was a great way to experience life in the Aswan way. Perhaps one of the most intriguing experiences was to see street vendors selling anything from shirts to souvenirs to the tourists.

They were so persistent that they would even walk along with you in the hope of making a sale. Ignoring them is a sure sign of telling them politely you’re not interested. Making conversation with them even just to say ‘no’ means you won’t get rid of them in a hurry. It’s just their way of life.

The Egyptians rely on tourism and have seen a drop in visitor numbers since the Arab Spring gave way to ongoing political unrest. But if you’re looking for a bit of winter sun, then be assured that tourist police and armed boat guards are all around to ensure you have a safe and wonderful holiday.