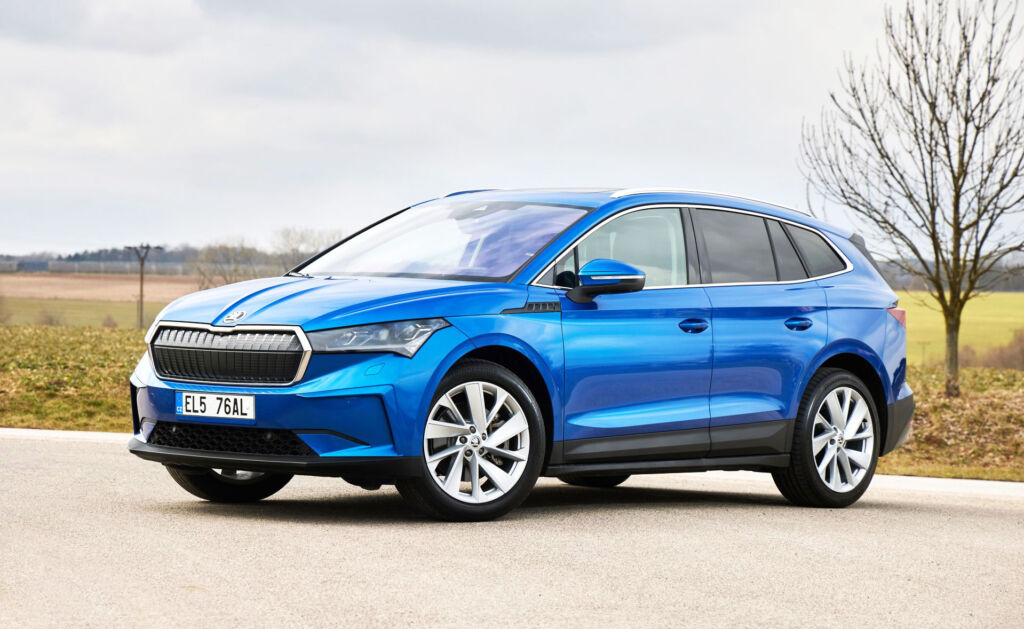 Skoda has entered the fully electric car market with their Enyaq iV range, an SUV with some great lines. Jeremy Webb got behind the wheel of their Enyaq iV 60 for a whiz around the Surrey Hills, enjoying the instant power which he discovered, gives the driver a real buzz.

As we move towards 2030 and the Government ruling of banning the production of petrol and diesel-only powered vehicles, every car manufacturer is developing some form of Electric Vehicle ( EV). Previously I have mentioned what I see as the downside to Hybrid cars, but I confess I have a passion for fully electric cars.

When Skoda announced, the Enyaq iV was going into production, I was captivated and a little annoyed. I was annoyed because I had just purchased a new Skoda Kodiaq SUV, and the brand showcases a beautiful looking model that I knew I would want. My desire has been confirmed after driving the Enyaq iV for a couple of weeks.

Driving a good electric car for me is addictive as the performance is incredible. Instant power is seamlessly applied to the wheels, forcing you forward at exhilarating speeds if you wish to put your foot down. The motion is even smoother than the best automatic vehicles as there are no gears, and the Enyaq iV 60’s ride is as smooth as they come.

It is a delight to drive with an exceptional cockpit layout and excellent ergonomics. The Driver receives all the information they need in a precise digital readout. I will return to the driving experience later; first, I will touch on exterior features. 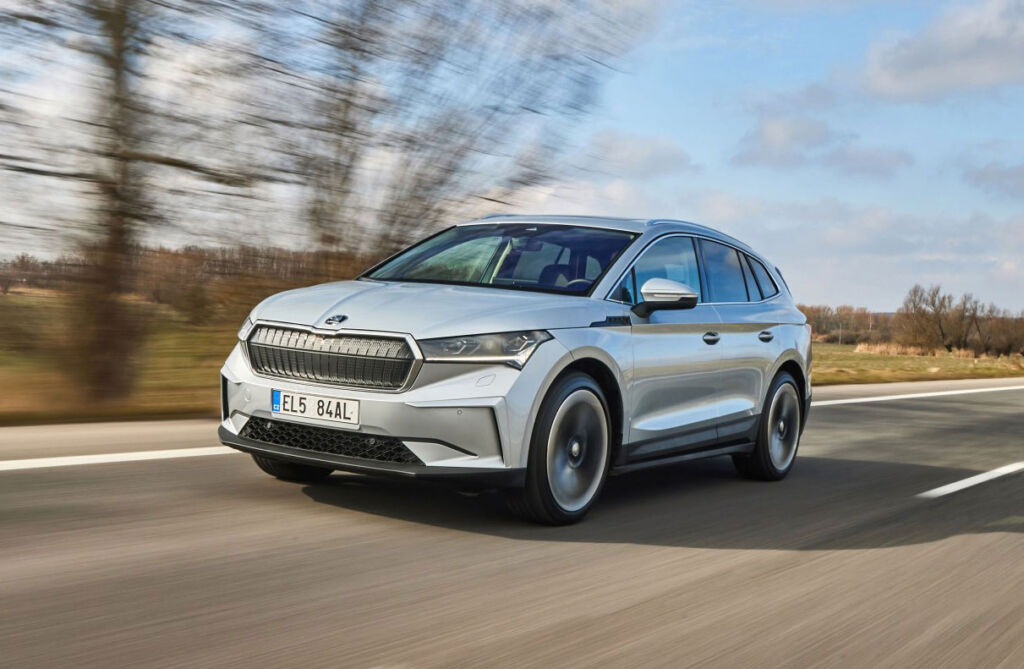 The angled exterior of the Enyaq iV 60 looks clean and has the benefit of improving the vehicle’s aerodynamic efficiency. I find it smart and love the touches Skoda has put on the car, like black grill intakes ahead of the door mirrors, giving it a sporty profile.

130 LED lights on the Enyaq iV 60 form the Crystal Face making an imposing impression while illuminating the road. The uniquely designed LED Matrix headlights are stunning, visibly pleasing for me, but I won’t be alone in that opinion. 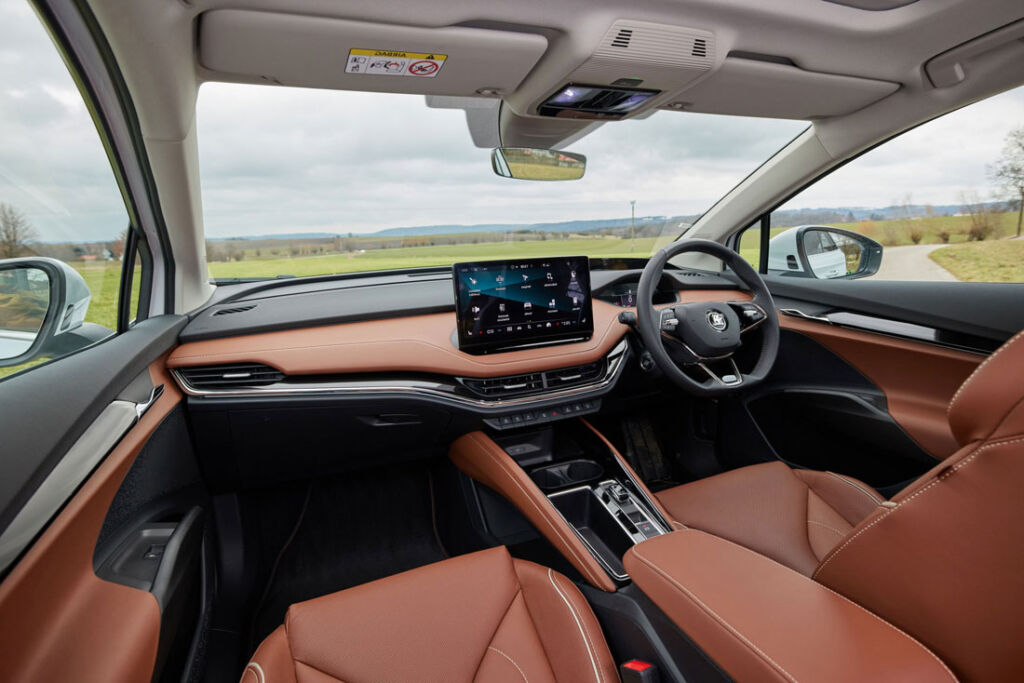 Inside the car, space is generous, and all passengers will appreciate this, along with the little touches Skoda puts in the car. Good storage space for your books, or more likely technology, drinks, and it comes with the required power outlets to charge gadgets.

In addition to this, load-carrying is easy with the large boot, and if extra room is needed, the seats fold flat for van-like cargo carrying ability. 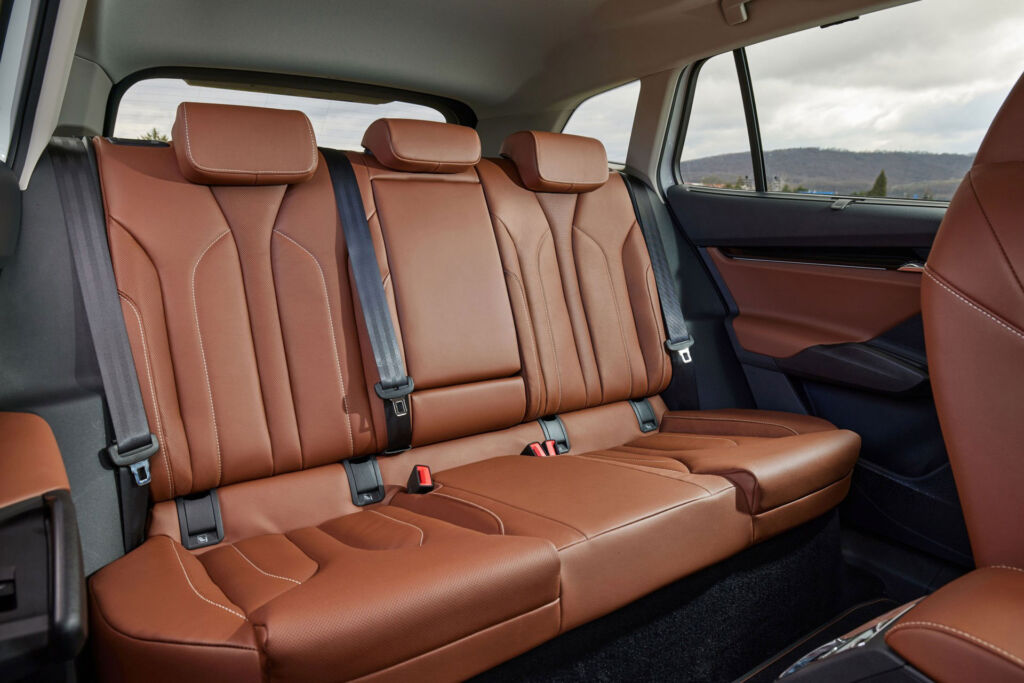 The Enyaq iV 60 interior quality is superb, and my Nephew, a connoisseur of design, commented that the look and stitching are as gorgeous as the Aston Martin models I have reviewed. The detailing and materials make it look and feel like a much more expensive car for owners.

The seats throughout the vehicle are comfortable and support the body, with the front ones benefitting from many electrical powered movements to allow for the correct position for the occupants.

As with most new cars, the Enyaq iV 60 comes with an abundance of driving assistance aids. These features are getting so numerous; one could write many words describing them all, which would only interest a few dedicated readers.

One excellent safety feature the Skoda has is the orange warning light that appears on the frame of the door mirror, identifying the Driver there is something in the blind spot of the vehicle. Others are Lane Departure Assist, Collison detection and Front and Rear Impact detection. 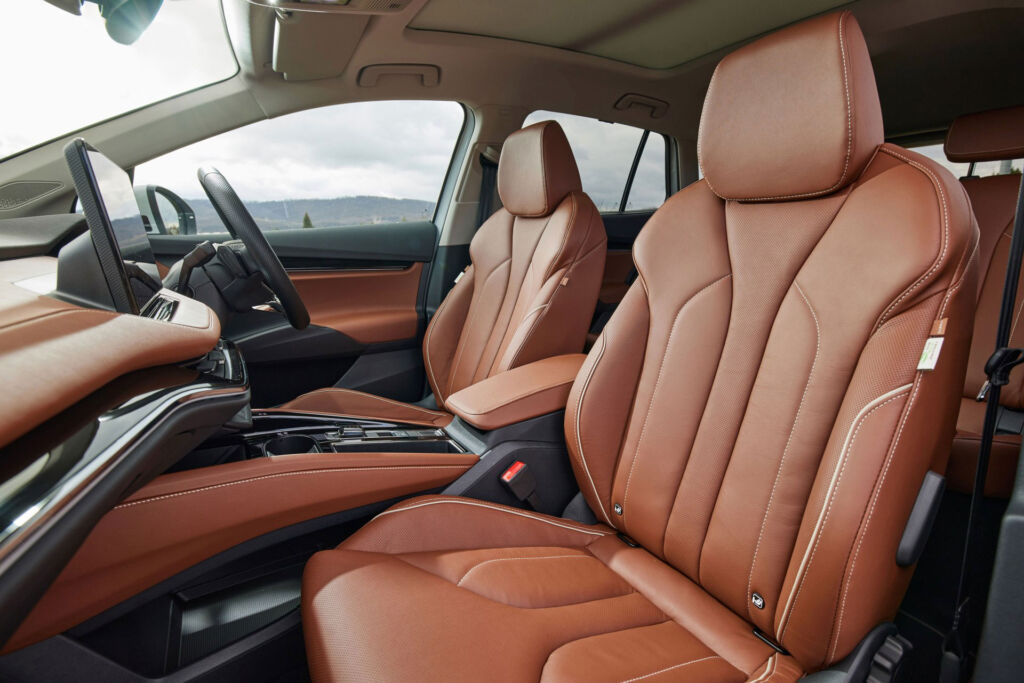 A large infotainment touchscreen sits in the middle of the console so the driver and front passenger can control features with ease. Climate control, Media, Navigation and Car settings are a breeze to work.

A range of driving modes is available, from eco being the most efficient limiting the power to the rear wheels, through Sport, which increases acceleration. This leads me onto the vehicle’s range. 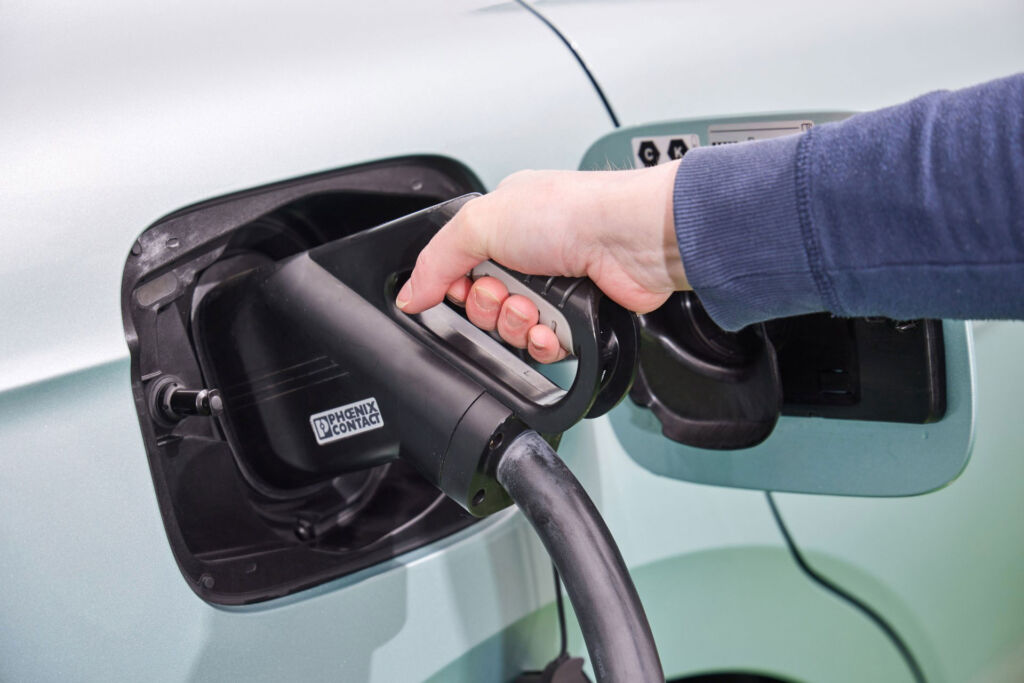 The question everyone asks with electric cars, is “What is the range of the car?” Range figures depend on how you drive, just like mpg figures for internal combustion engine cars. One thing that can affect battery performance is the outside temperature. In cold conditions under about 8c, the battery will not produce the same range as a hotter day. The Enyaq iV 60 helps prevent the dreaded range anxiety with regenerative braking.

Skoda state the Enyaq iV 60 has a 256-mile range on a full charge, but if you are heavy on the pedal, that figure quite quickly comes down, but equally, if you use the brake pedal a lot, say in urban areas where the traffic flow is not good regenerative braking puts some power back into the battery. The result is the range being replenished. You may arrive at your destination on a busy commute with the same range as when you left.

Three braking levels are available on the Enyaq iV 60, so when you select B on the Gear selector, you choose how much regenerative braking you want from the car. Maximum means when you release the accelerator, the car starts to brake by itself, diverting forward motion into energy return to the battery.

The vehicle slows down quite rapidly, and the power reserve gets a boost. It is a superb asset to have when the car is in a busy environment. The other two levels lessen the amount of regenerative braking and thus the amount of energy return to the battery.

The Enyaq iV 60 comes with a standard charger for domestic supply and the lead for connecting to Fast charging power units. These charging stations are becoming ever more readily available, with facilities such as Hotels, Leisure Centres and Supermarkets having them. You can also get grants to help with getting a rapid charger fitted at your home.

Becoming a Skoda Enyaq iV 60 salesman for a weekend
At Luxurious Magazine, I consider us to be far more than just Journalists. Over the weekend, I had three sets of neighbours come to my home to discuss the Enyaq iV 60, and I was happy to do this. In fact, I believe I went beyond the call by giving them rides around my local town, so they could experience travelling in the car.

One gentleman who currently owns a high-end Mercedes-Benz estate stated that when he comes to sell it in a year or so, his next purchase will be a Skoda Enyaq model, possibly the iV 80 with the longer range. I believe this is the true definition of being an Influencer and not someone who gets photographed with a product that has little or no knowledge of what it actually is or does!

In summary
My thoughts on the Enyaq iV 60 are that if this is the future of motoring, I am looking forward to driving well into my 90s, and yes, that is some way off. I have driven the Tesla Model S and Model X, and they are both excellent vehicles, but the entry model Enyaq iV 60 comes in at a more real-world price, making it a far more attractive proposition through my eyes.

In a nutshell, Skoda has produced a fully electric car that can take on the Tesla, Polestar et Al. and it is within reach of many more motorists than Elon’s creations. It is an electric SUV from Skoda that can, without a doubt, compete against all other brands. Skoda has produced a highly desirable vehicle, and it will be a leading contender when it comes to my next purchase. 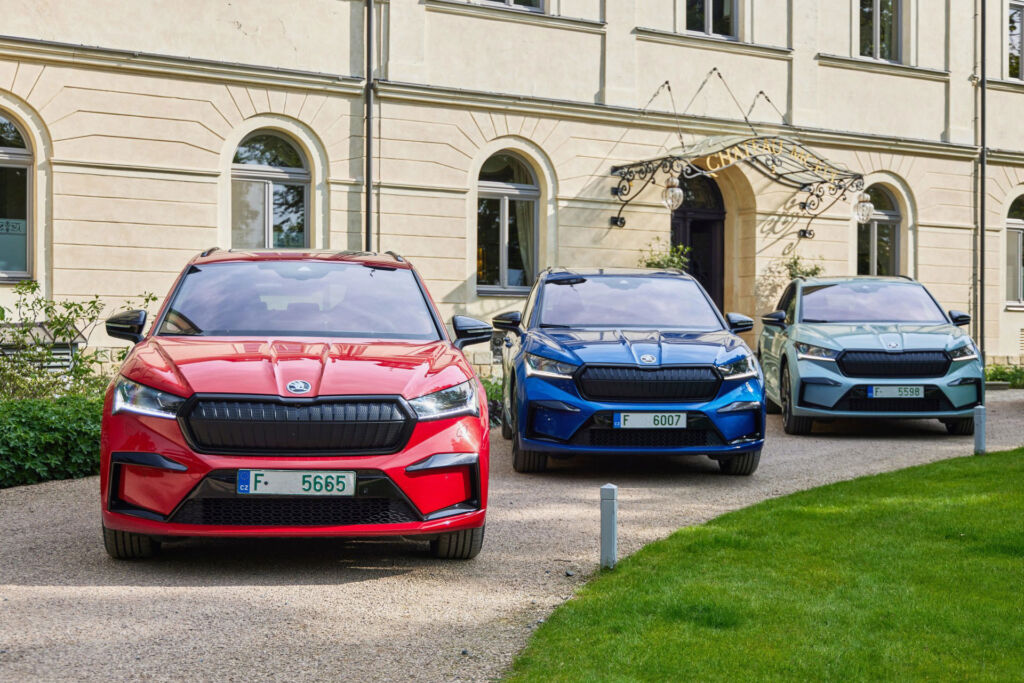