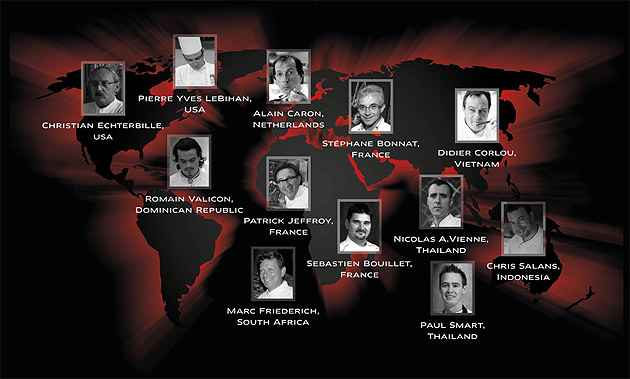 In what promises to be an amazing celebration of the culinary art, Sofitel So Bangkok has invited 12 internationally renowned chefs to lead a 5-day event that offers both cooking classes by the masters and the opportunity to tastes their combined skills in unparalleled lunches and set-menu dinners.

Tuesday 25 September until Saturday 29 September 2012 – The excitement of cooking, the joy of dining and the thrill of the first ever culinary showdown.

All 12 chefs belong to the event’s partner, “Village de Chefs”, the site through which members, French or French-speaking professionals working abroad, share their experiences for the enrichment of French gastronomy throughout the world.

Titled So Amazing Chefs 2012, this gastronomic extravaganza offers various options, from morning and afternoon master cooking classes, held in various of the hotel’s distinctive restaurants and conducted by the maestros, to themed lunches and unique set-menu dinners where each of six or nine courses are prepared by a different chef for truly magnifique culinary experiences.

The highlight of the event, on Thursday 27th September, will be a “Culinary Showdown” with 10 chefs, each at their own individual cooking stations, giving virtuoso displays of their skills. Here, stunningly presented in the hotel’s Ballroom, guests will get a close-up view of the culinary maestros at work, while Thai celebrity chefs will judge and add to the excitement. All proceeds from this Culinary Showdown will be donated to the CCF Foundation under the Royal Patronage of HRH Princess Maha Chakri Sirindhorn to help needy children.

“The highlight of the event, on Thursday 27th September, will be a “Culinary Showdown” with 10 chefs, each at their own individual cooking stations, giving virtuoso displays of their skills.”Sofitel So Bangkok will also work with Vatel International Business School at Silpakorn University to allow a group of talented Thai students who are studying Hotel and Tourism Management to have an opportunity to work with these world-class chefs in the kitchens for their own development and skills enhancement

SO, 12 chefs from 8 countries form a prestigious line-up in a unique culinary event starring:

With such a star line up, So Amazing Chefs 2012 is a worthy addition to the culinary ateliers hosted at Sofitel So Bangkok, much to the delight of local gourmets, will become one of the most exciting culinary event in Bangkok.