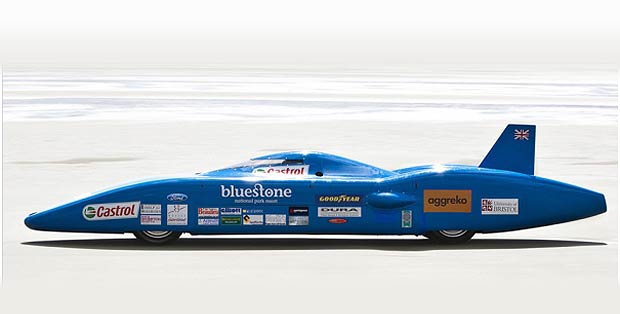 Land Speed Record breaking cars and motorcycles will be brought together with their model counterparts for the first time at Sandown Park race course on Saturday February 18th in a unique one day show. The show is being held in conjunction with Barry Potters International Toy Fair, which attracts toy dealers from all over Europe and will include not only the cars themselves but also the people who drive them.

Also on hand will be authors who have written about speed record attempts and artists who have depicted the cars across the last one hundred years.

“This is a one off that is not to be missed,” said organiser Geoff Holden. “It is the first time that we have been able to get everyone together like this and it may not happen again.”

Barry Potter organiser of the International toy fair said: “This is a unique opportunity for anyone who is interested in speed record breaking. It will be a fantastic day out where enthusiasts can combine the real thing with their smaller counterparts. Last year we celebrated with CMC (Classic Motor Cars of Bridgnorth) and Jaguar Heritage the 50th anniversary of the E-Type now, now we are celebrating speed record holders and it is our intention to bring other exciting opportunities that will enhance the international toy fairs that we have run successfully for many years.”

Amongst the items on show will be:

Team members will be on hand to answer questions; visitors will have the opportunity to try out the Bloodhound Driving Experience, as well as choosing from a wide range of Bloodhound SSC merchandise and joining the Bloodhound 1K Supporters Club.

Bluebird Electric / 100 Years of Bluebird
The current UK electric land speed record holding car with which the team hope to raise the UK record speed further in 2012 will be on display.  It is also hoped that Don Wales, grandson of World Land Speed Record holder Sir Malcolm Campbell and nephew of Donald Campbell, will be able to attend

This is one of many events taking place throughout the year to celebrate the 100th anniversary of the naming of the first Bluebird car by Sir Malcolm Campbell.

Angelic Bulldog
A motorbike streamliner being built with the aim of achieving an outright world land speed record for motorcycles in excess of 400mph in 2012. The ‘bike will be on display and driver Gabriel Uttley will be in attendance throughout the day to answer questions, offer sponsorship opportunities and enrol new members into the Angelic Bulldog Supporters Club.

Book Signings
Authors of recently published speed record related books will be signing copies during the show including Mike Varndell, author of ‘The British are Coming’, published by Transport Bookman Publications, and Neil Sheppard, author of ‘Donald Campbell, Bluebird and the Final Record Attempt’, published by The History Press.

Speed Record Art
Arthur Benjaminsis an accomplished artist whose work appears on the dust jacket and flysheets of Mike Varndells book ‘The British are Coming’. Examples of his paintings and prints will be on display, and he will also be on hand to sign copies of Mikes book on request. Arthur specialises in land and water speed record subjects as well as motor racing scenes.

Martin Squires is a young artist with a personal interest in older automotive subjects including speed record vehicles, examples of which will be on display.

Brooklands
The Brooklands Outreach team will be displaying material relating to the famous racing circuit in Weybridge, just a short distance from Sandown Park that is known as ‘The Birthplace of British Motorsport and Aviation’. Visitors will be offered the opportunity to become Brooklands Trust Members.

Autodromo
Master model making from the studios of Autodromo. Examples of very high quality large-scale models from The Autodromo Collection will be on display, alongside a prototype1/12th scale model of Sir Malcolm Campbell’s 1935 Blue Bird land speed record car. The finished model will be available in a limited edition later in 2012, and orders for this or other models from the Autodromo Collection may be placed on the day.

The Speed Record Club
Representatives of the Speed Record Club, a worldwide group of enthusiasts interested in speed record attempts of all types both historical and current, will be on hand to answer questions of any nature on the subject. The club display will include promotional items, magazines and club membership offers.

Show Opening Times and Admission
Speed at Sandown Park and the BP Fairs event will both be open for general admission between 10:30 and 15:30, with ‘Early Bird’ tickets available from 08:00.