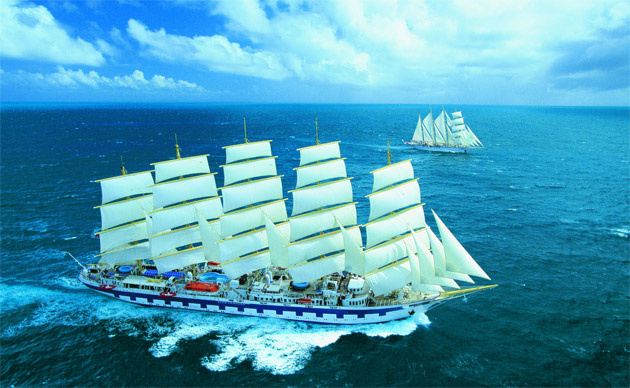 The graceful tall ships in the Star Clippers’ fleet provide an exceptionally romantic setting for lovers, for a honeymoon, marriage blessing, anniversary or other romantic voyage.

Sailing in and out of the world’s most beautiful destinations in an atmosphere of casual elegance, a cruise on one of the three Star Clippers ships is akin to having a fully staffed private yacht.

Lie together in bowsprit net high above the waves, spot dolphins from the decks, share a sunset cocktail in the al fresco Tropical Bar, or star gazing the night away beneath the majestic masts. For the ultimate romantic moment, Star Clippers can arrange a sunset marriage blessing by the Captain, followed by a champagne toast. To make the most of this ultimate romantic setting, here are the top romantic moments on board a Star Clippers’ tall ship:-

Swim with the turtles 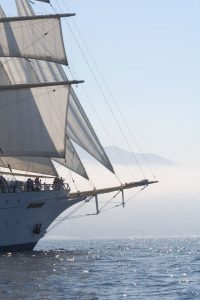 Sail the sheltered islands of the west coast of Panama, Costa Rica andNicaragua, make footprints on idyllic beaches and swim together in the company of sea turtles. When at sea, stretch out in the bowsprit nets at sunset, watching dolphins ride the bow wave as the ship glides through the water. A week’s sailing on Star Flyer, round trip from Puerto Caldera, costs from £1,150pp, cruise-only, departing December 16, 2012.

Star-gazing on a sun-warmed deck
Every spring and autumn, Star Clippers’ three ships reposition between their summer and winter cruising areas on long, leisurely voyages across the Atlantic. There’s no better place for star-gazing, away from light pollution, in the centre of the ocean; lying together hand in hand on sun loungers on the darkened deck and gazing up at the millions of stars scattered across an inky-black sky. A 22-night crossing on Star Flyer, Malaga to Barbados, costs from £985pp, cruise-only, departing October 20, 2012.   Desert island kisses The deserted islands of the white sand-fringed Tobago Cays in the Grenadines are strictly off limits to larger ships but easily accessible for a graceful clipper. Coconut palms arch over white, sandy beaches, lapped by the turquoise sea, the ideal setting for gathering shells together, or slip away to an even more deserted beach to be alone on this idyllic desert island setting. A seven-night Grenadines cruise round trip from Bridgetown on Royal Clipper via Tobago Cays costs from £1,290pp, cruise only, departing December 1, 2012.

Gather shells together
St Barths is one of the most glamorous islands in the Caribbean and also one of the most romantic. Just beyond the little town of Gustavia is the crescent-shaped Shell Beach with its soft sand scattered with thousands of pink shells. Spend a relaxing day together, then head back to the ship via Le Select, the local ‘yachtie’ bar, with vintage pictures of Star Clippers’ ships on the walls. A seven-night Leeward Islands cruise from St Maarten on Star Clipper, calling at Gustavia, costs from £1,155, cruise-only, departing December 8, 2012.

Lose yourselves in Venice
The world’s most beautiful port to sail into or away from is Venice. Stand arm in arm on the decks as the ship glides slowly along the Giudecca Canal, lined with majestic old palaces and churches. Wander hand in hand along the silent canals of the old city, find a shady square for an al fresco lunch a deux, take a gondola ride to see the city from the water while being serenaded by a gondolier. A ten-night sailing from Venice to Athens on Star Clipper costs from £2,055pp, cruise-only, departing July 10, 2013.

Cocktails with a view
Late afternoon is the most romantic time in Santorini, when the sun begins to sink towards the caldera and lovers gather in the cliff-top bars to catch the last rays, listening to opera and sipping cocktails while gazing out over the rim of a vast, extinct volcano. A seven-night sailing on Star Clipper, round trip from Athens, taking in Santorini, costs from £1,435pp, cruise-only, departing June 1, 2013.

Nature’s fireworks
Nature lays on an impressive fireworks display on the volcanic island of Stromboli, one of the Aeolian Islands off the north coast of Sicily. On a night-time sail past, stand arm in arm on deck and watch the sparks erupt, as molten lava cascades down the mountainside into the sea. A seven-night round-trip voyage from Rome on Royal Clipper, calling at the Aeolian Islands, costs from £1,515pp, cruise-only, departing October 20, 2012.

La Dolce Vita
Wander through the narrow streets of Portofino, a former fishing village on Italy’s north west coast and now one of the most fashionable – and romantic —towns on the Italian Riviera. Cool down with a limoncello granita in a pretty café on the waterfront, or climb a wooded trail together to reach San Giorgio church overlooking the town for breathtaking views. A seven-night voyage round-trip from Monte Carlo on Star Clipper, calling at Portofino, costs from £1,435pp, cruise-only, departing May 4, 2013.

Enchanting Tallinn
Lose yourselves in the cobbled streets of Tallinn, the fairytale capital of Estonia, its old centre a mass of turrets, secret courtyards and crooked houses clustered inside the medieval ramparts. A ten-night voyage round-trip from Stockholm on Star Flyer, calling at Tallinn, costs from £2,270pp, cruise-only, departing May 25, 2013.

Cuban rhythm
Discover the Caribbean at its purest at seductive Cayo Largo in Cuba, a beach made for lovers, with powdery sand, gentle dunes and warm, azure water, visited for a day on Star Clippers’ brand new Cuba sailings, starting 2014. A six-night round trip from Cienfuegos in Cuba, calling at Cayo Largo, costs from £1,120pp, cruise-only, departing March 23, 2014. All prices include full board on the cruise and port charges. Flights are extra. To book, call 0845 200 6145 or visit www.starclippers.co.uk.