Welcome to Bentley Motors. And welcome to the World Premiere of the new Continental GT V8.

Dear Professor Winterkorn, Members of the Board of the Volkswagen Group and Brands, Ladies and Gentlemen from the media.

The sound is unmistakeable; the deep growl that can only be a V8. But this is a new generation of V8. An engine so efficient it can travel over 500 miles on a single tank and at the same time get from 0 to 60 miles per hour in 4.6 seconds. All this in a car with the luxury, quality and craftsmanship that can only be Bentley. 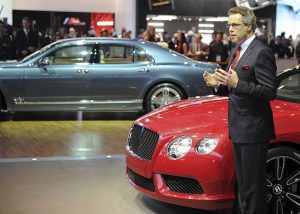 Ladies and Gentlemen, for a decade the Continental has defined high luxury grand touring. Throughout that decade there has only been one engine capable of delivering the effortless power and performance the GT needs – the unique 6 litre twin-turbo W12. Indeed, this power plant has been so successful that Bentley is now the world’s largest producer of 12 cylinder engines. The W12 will continue – it is in fact a core competency of Bentley – and we will develop this engine further – to the next level of power, performance and efficiency.

Not only will it deliver the sporting performance expected of a Continental, but it will do so with a staggering 40 per cent improvement in fuel economy.

This is a state-of-the-art V8. Our engineers left no detail unexamined, seeking more efficiency and higher performance. Every component was designed to minimise energy losses without compromising power or durability. This process of engine optimisation encompassed everything from oil viscosity to low friction bearings, thermal management to energy recovery, low-rolling resistance tyres to an ingenious“hot-side inside” engine design.

Uniquely in a V8, the twin turbo-chargers are placed within the V, contributing to efficiency and weight reduction.

But perhaps the most ground breaking technology of all is variable displacement – deactivating cylinders when not needed.  Bentley is a pioneer in this and we first employed this technology in our flagship Mulsanne in 2010. For the new V8, the system has evolved. Drive at a steady speed or decelerate and four out of eight cylinders go idle, unrecognizable to the driver or the passengers. The engine management system – a black box which calculates as many as 180 million instructions per second – closes down the valves in four cylinders so that they act merely as springs. Press on the throttle, however, and the engine seamlessly roars back to full capacity and the driver is instantly delivered the full power of the V8.

And that power comes early and in force.
•500 brake horsepower at 6000 revs per minute;
•660Nm (487 lb/ft) of torque available across almost the entire rev range.
•0-60 in 4.6 seconds; and
•a top speed of 188 miles per hour delivered smoothly, quickly and more efficiently by a new close-ratio, 8 speed automatic transmission.

And of course this is a Continental – and Continentals are all-wheel drive.

The design features of the V8 leave no doubt that this is an unmistakeably sporty new Grand Tourer: a chrome-rimmed black matrix grille, a black mesh lower grill with distinctive “sharks teeth” appearance, figure eight tailpipes and a new red Bentley B badge to demonstrate its sporting pedigree.

The V8 will feature in both the GT and the new Continental GTC. Deliveries will begin in the spring and right now, in the middle of a Detroit winter, the thought of hearing the new V8 sound in an open-top GTC in a Michigan summer is tempting indeed.

These new Continentals will attract new customers to the Bentley brand. And they will be in good and growing company. Bentley is accelerating. December sales were 1059 cars, up 69 per cent on the same month in 2010. That is the best month since Bentley’s pre-recession record of 2007 and the second best month ever.

And not only that, Ladies and Gentlemen.

It is too early to give you the detailed financial results for the past year. But we are proudly forecasting a positive operating result.

Looking ahead, we have a strong and clear strategy for the Company. Called “2018”, the strategy is based on increasing efficiency, optimising all business functions and processes and, of course, new model introductions – the fruits of our which are already becoming visible.

2011 has clearly laid the foundations for a resurgent Bentley. Global sales for the year were up an impressive 37 per cent to 7003 cars. Americans are back in the showrooms in greater numbers than we have seen in nearly 3 years, with US sales up 31 per cent to 1876. In Europe, our business overcame the market turmoil with sales up by over a half to 1187 cars, led by a German market which increased by a remarkable 88 per cent.

And even in our home market, the UK, which proved to be extremely challenging over the past months, we see an increase of over five per cent to 1031 cars sold. This cements our position as market leader in the UK amongst our direct competitors.

But it is China that is a corner stone of our success. Until last year, we had never sold 1000 cars in the region. But in 2011 we surpassed that milestone before the end of August, going on to virtually double sales to 1839 units.

Chinese customers are like any other; they respect craftsmanship, luxury and quality. And they see these qualities delivered authentically by Bentley.

Ladies and gentlemen, Bentley will continue to live up to these expectations. To make cars which reflect changing customer demands, changing social expectations and ever-changing technologies. The new V8 is proof of this approach. A car with the technology to cross countries on a single tank but with the exhilaration and style that is typical Bentley. It is true to the essence of the brand.