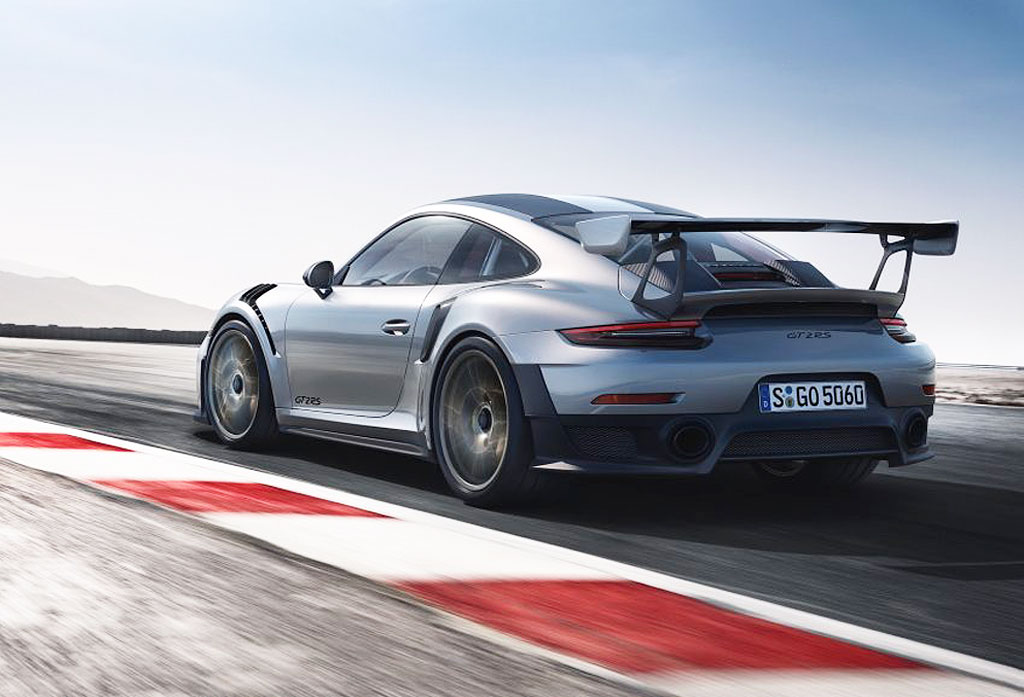 A new study by Hagerty, the renowned vehicle insurer, has looked at the depreciation curve of famous Supercar marques, including Ferrari, Aston Martin, Porsche and Lamborghini and discovered that where they come from is a significant factor.

In their latest report, Hagerty’s global Automotive Intelligence team has investigated the depreciation curves of modern supercars, taking a departure from the more familiar classic market reports most often associated with the brand.

In an era of effortless performance, the market for modern luxury sports cars has become increasingly crowded, with vehicles reporting performance statistics that would have once seemed impossible. Hagerty specialists compare them based on depreciation rates and suspect most owners would be more concerned about which loses a quarter of its value in three years than which is faster to 60 mph.

Using data from the UK and US markets, Hagerty has chosen marques that reflect the traditional European supercars in this segment: Aston Martin, Audi, Bentley, Ferrari, Lamborghini, McLaren, Mercedes-Benz, and Porsche.

While Hagerty has lots of policy quote data (over 24,000 data points) for vehicles in this sector, they worked with expert industry partners at AutoTrader UK, Premier Financial, and Woodside Credit to diversify the data. Within each data source, Hagerty looked at how values for a vehicle changed over time. 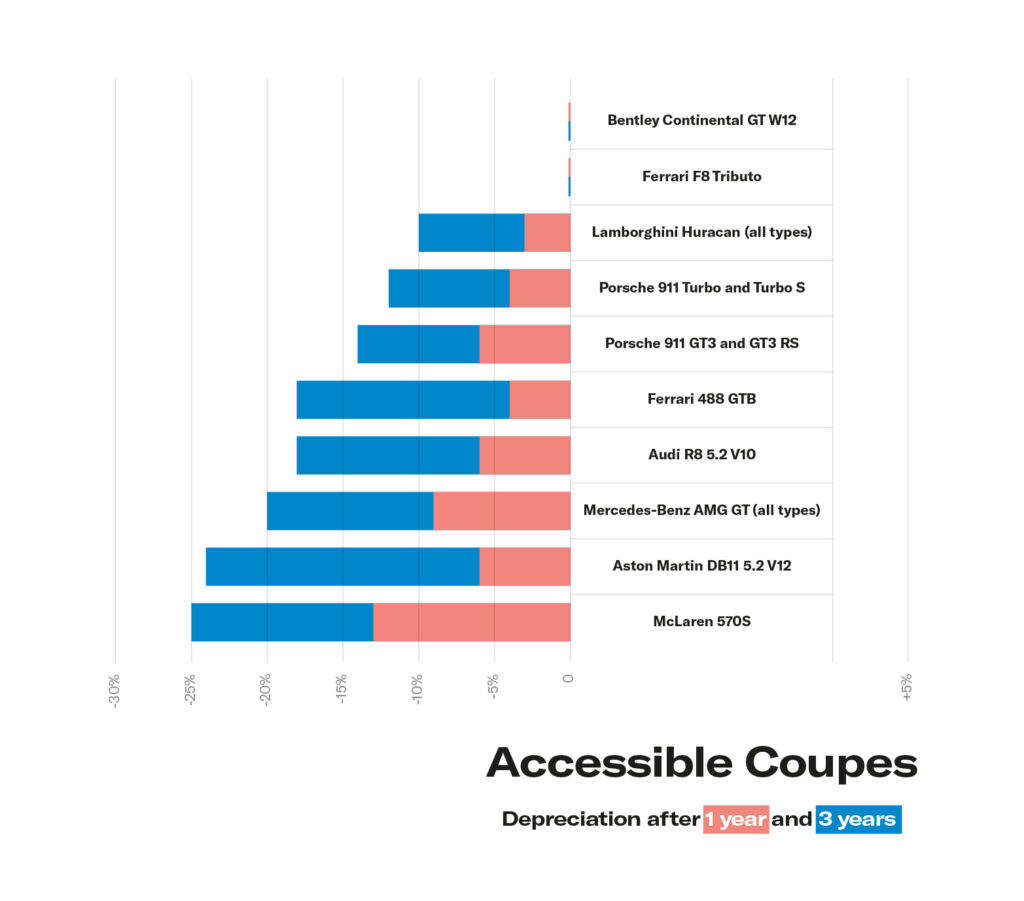 Hagerty found that all these cars depreciate. Typically, about 6 per cent after one year and 20 per cent after three years. No amount of power, technology, or “specialness” can help a performance car completely escape the gravity that pulls down the values.

However, there are differences, depending on the circumstances of their launch and, it seems, where they come from.

In terms of the launch of a new supercar, the hype that accompanies the introduction of these cars seems to be a double-edged sword. In some cases, it might create more initial demand than the factory is willing to meet, causing a blip of appreciation. 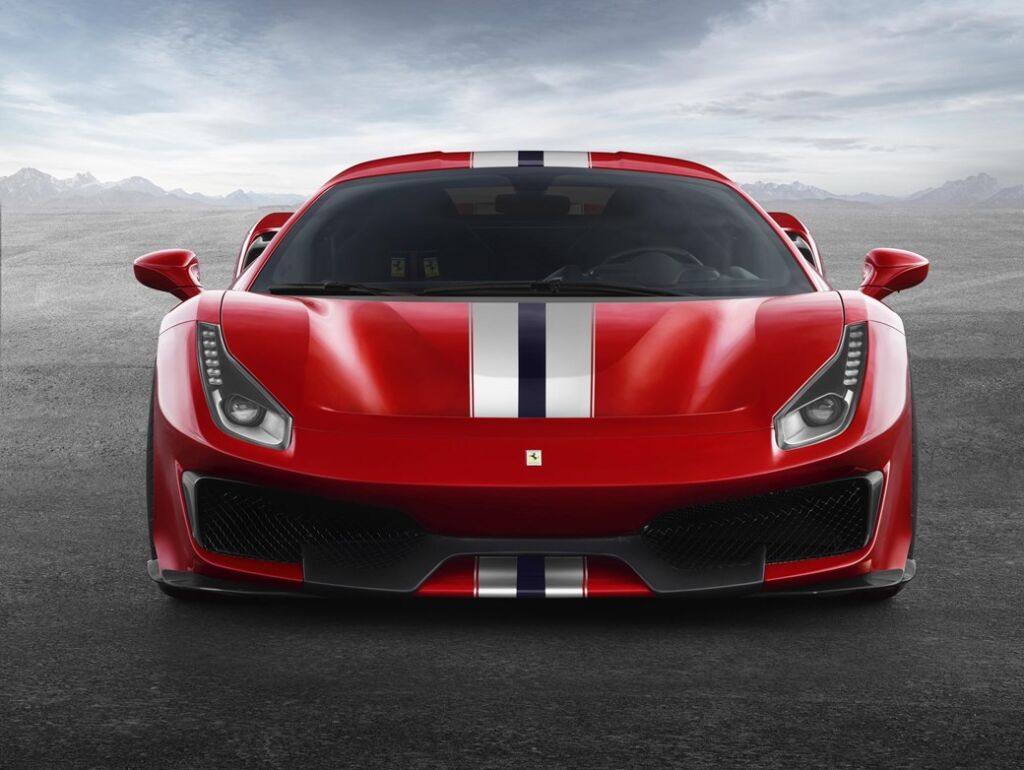 For instance, the Ferrari 488 Pista Coupe was typically worth 6 per cent more a year after it launched as enthusiasts tried to jump the queue. But by year three, it, too, had fallen in value. The Pista falls by around 7 per cent; at the opposite end of the scale, the Porsche 911 GT2 RS has dropped by 30 per cent since launch. 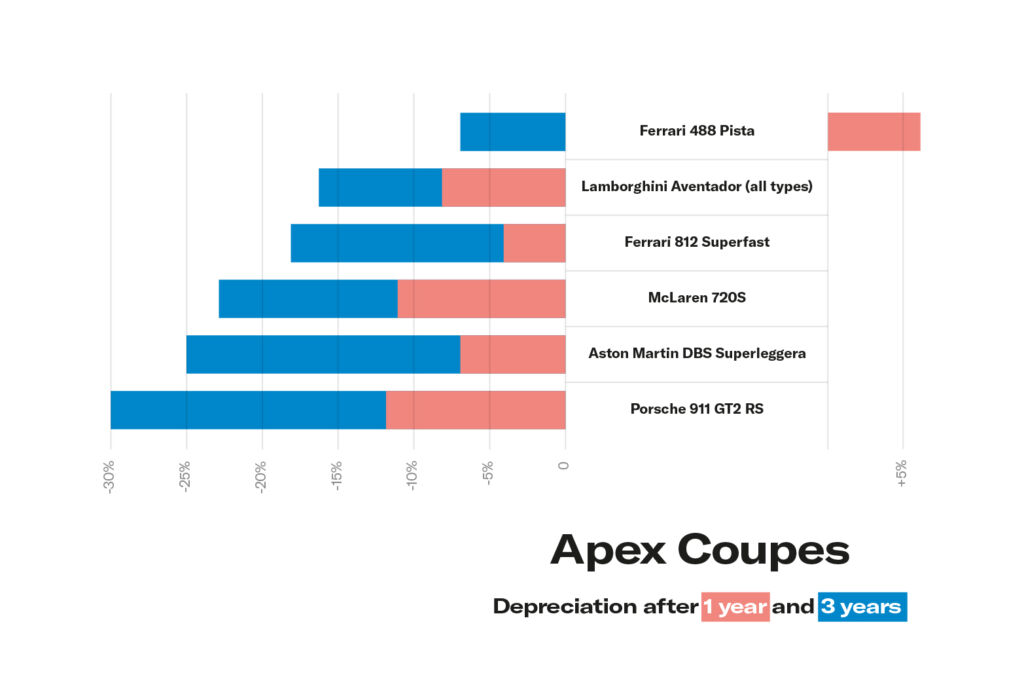 Some cars with prominent launches depreciated more after the first year because they were purchased new at unsustainably expensive prices, perhaps driven by dealer markups and speculative buyers prepared to pay over the odds to jump the queue. The recent Porsche 911 GT2 RS saw an average of a 12 per cent decline in the first year, likely because of buyers who paid over list price – the manufacturer’s recommended retail price – and sold soon after.

Geography matters, too. The Italians, Ferrari, and Lamborghini tend to depreciate less in three years than the Germans. Britain’s Aston Martin and McLaren depreciated by anywhere from a fifth to a quarter.

Porsche 911 GT3s (plotted as one model but calculated as separate GT3 and GT3 RS versions) show a bit more depreciation than the Turbo coupes, seemingly due to increased speculation. The Lamborghini Huracán depreciates more modestly than its cousin, the Audi R8 5.2 V10. 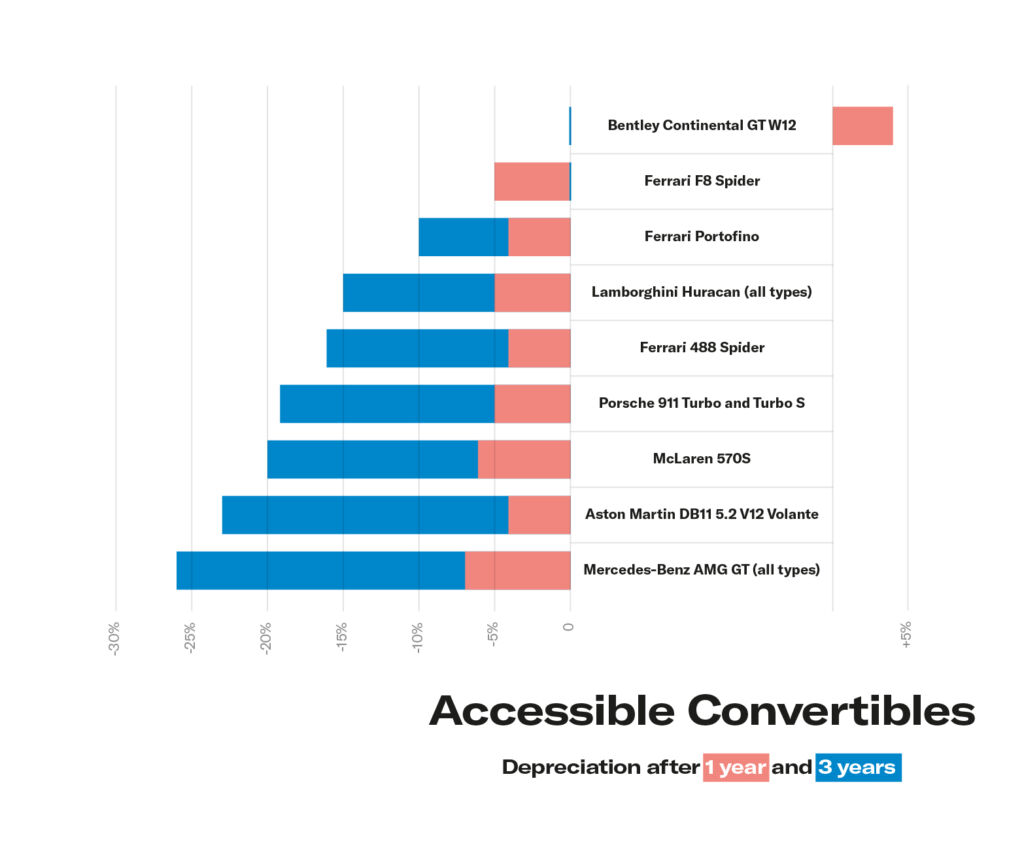 Generally, the convertible versions of the cars in the accessible set depreciate less than their coupe counterparts, except for the Mercedes-Benz AMG GT and Porsche 911 Turbo.

Hagerty concluded that this initial depreciation doesn’t mean these cars won’t be collectable in the long term, and there’s nothing here to say that tomorrow’s enthusiasts won’t lust after a contemporary McLaren.

However, for those who buy these cars new and move on shortly after to the next big thing, there are clear disparities to consider. And to those who pick them up hoping to make a quick buck: look elsewhere.

Read the full report – with data and graphs – here.