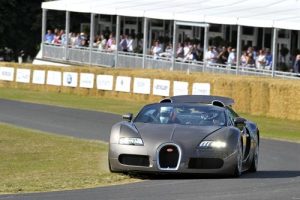 A record number of Supercars at Goodwood Festival of Speed 2011

British supercar premiers to include the Ferrari FF, Lamborghini Aventador, Marussia B1 and Hulme CanAm Spyder

Goodwood is to give a ‘first glance’ to other interesting road cars, including the world debut of the Honda CR-Z Mugen, Abarth 695 Tributo Ferrari and Porsche Panamera Turbo S.

Unlike a conventional motor show, the Supercar Run affords a fantastic opportunity not only to exhibit a new supercar, but also to show it in action on the Goodwood hillclimb. Last year’s Goodwood Festival of Speed saw over 20 UK public debuts out of a 50-car field, and with six weeks still to go, this year’s entry is looking even stronger.

For 2011 the Supercar Run promises the very latest supercars from all around the world, with cars from as many as 11 countries anticipated. Cars already confirmed to be making their World and/or UK dynamic debuts will include the Ferrari FF, Lamborghini Aventador LP700-4, Jaguar XKR-S, Pagani Huayra, GTA Spano, Bugatti Veyron 16.4 Super Sport, Hennessy Venom GT, Koenigsegg Agera R, Marussia B1 and B2, Hulme CanAm Spyder, the six-wheeled Covini C6, and the production version of the McLaren MP4-12C, which made its World debut in pre-series form at the 2010 Festival of Speed.

In all, as many as 50 great supercars will be in action on the Hill, which will certainly be a feast for the senses of the expected 175,000+ visitors to the Goodwood Festival of Speed and Moving Motor Show. A number of other important UK debuts will also take place in the First Glance class, FoS-TECH and in the manufacturers’ vast exhibition area at Goodwood, including the new Morgan 3 Wheeler, Alfa Romeo 4C, Peugeot EX1, Chevrolet Camaro Convertible and Infiniti Etheria concept.

Away from the Supercar Run, over a dozen other new vehicles are expected to be making their UK public debut on the Hill as part of the new Goodwood Moving Motor Show, presented by Auto Trader, details of which will be confirmed in the coming days and weeks.