2uettottanta, the Pininfarina concept car winner of the 2010 Car Design of the Year Award, will be exhibited at the Qatar Motor Show, that will open to the public from 25 to 28 January 2012 in the futuristic setting of the Doha Exhibitions Center.

Following the success of the first edition, the Gruppo Carrozzieri – ANFIA – Associazione Nazionale Filiera Industria Automobilistica (the Italian Association of the Automotive Industry) – once again proposes the “collective” presentation of Made in Italy. Four Italian brand names, Pininfarina among them, will be exhibiting at Qatar Motor Show their creations in a dedicated area of spectacular impact. 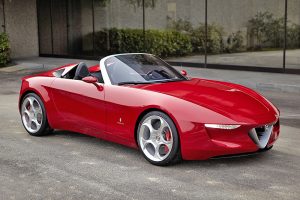 2uettottanta: a name that evokes the legendary Duetto, but also the years of activity at Pininfarina, which launched the celebrations for its 80th anniversary in 2010 with this concept car. And it decided to do so with a type of car that is by definition, the work of Pininfarina: an Alfa Romeo spider.

The 2uettottanta reflects Pininfarina’s determination to look to the future with optimism following tradition, restating its excellence in design and its acknowledged capacity for aesthetic and technological innovation. It is a concept that represents an innovative approach, projected into the third millennium, to a topic that is firmly rooted in Pininfarina history, the 2-seater spider. And like the best Alfa Romeo sports cars to come from Pininfarina’s pencil, the 2uettottanta exalts the driving experience and concentrates on the excitement of being at the wheel of an open car with a great aesthetic personality. It is a car that can make people dream and excites even after many years. The icon of a lifestyle that harks back to a lively, tumultuous period. Like the Duetto of the Sixties, which helped to establish a trend based on the themes of rebellion and escape, thanks to the film “The Graduate”.

The 2uettottanta is also a tribute to Alfa Romeo, which celebrated its centenary in 2010: the alliance between Alfa Romeo and Pininfarina is one of the most significant and durable in the history of the car, one of men and of passion, of design and cutting-edge technical solutions, which has generated an inestimable number of good-looking, innovative cars with plenty of temperament. With a predilection for sports cars and convertibles. The aim is to replicate all this with the 2uettottanta. So a clean, elegant line was chosen for this “simple 2-seater”, which is proposed with a 1750 cc turbo engine positioned longitudinally, an obvious reference to the “1750 Veloce” of 1968, one of the many versions derived from the famous “Osso di Seppia” (Cuttlefish). With its red bodywork, inspired by the typical Alfa Romeo paintwork, the 2uettottanta is 1797 mm wide, 4212.6 mm long, 1280 mm high and has a wheelbase of 2500 mm. 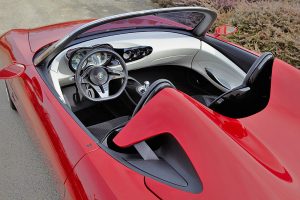 The pleasure of driving and feeling in harmony with nature is transformed into light, sleek, refined volumes, and shapes that seem to slip through the air easily. This generates the theme of this concept: the expression of a single volume, which is some way from the ground and suspended. The 2uettottanta almost seems to lift up from the ground “going further”. It is an optical effect achieved thanks to a line that crosses the whole car horizontally. An uninterrupted sign applied to dynamic, sporty proportions – typical of Alfa Romeo spiders – accentuated by the configuration of the passenger compartment, which is shifted significantly to the rear. The force of the design lies in its exaltation of simplicity, which does not need to show its muscles but concentrates purely on agility and harmony.

The 2uettottanta won the Car Design of the Year Award for 2010 in the concept car category, as a result of a survey by Car Design News, the leading online publication that focuses exclusively on the world of automotive design. Also in 2010 the Pininfarina design team was presented by the Editor-in-Chief of Czech magazine AutoDesign & Styling with the AutoDesign Award-Design of the Year Award in the concept car category.