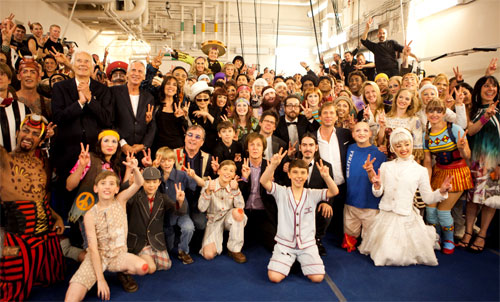 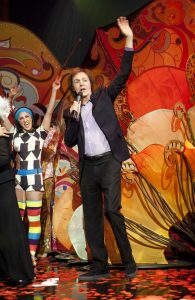 Ringo Starr said, “George Harrison and Guy Laliberte had a chat at a party and it’s still rolling on. I feel like it’s one of those magic moments. George, who brought the idea to Apple, would have been pleased with the results and I truly think John would have, too. I mean, what’s not to like, it’s a really cool show.”

This specially added 5th Anniversary show on Wednesday, June 8 included 19 original cast members from the 70 person cast, and ended with a surprise walk-on appearance from Sir Paul McCartney, Yoko Ono, Olivia Harrison, Sir George and Giles Martin, Dominic Champagne, Gilles St-Croix and Daniel Lamarre during the finale of “All You Need is Love.”

Following the show, there was a special moment backstage with Paul, Yoko, Sean, Olivia, Dhani, Sir George, Giles and the cast.

The exclusive after-party at The Mirage pool included Paul McCartney’s DJ Chris Holmes accompanied by Danger Mouse and Elijah Wood, a performance of “Eleanor Rigby” by Grammy Award-winning violinist Joshua Bell and pianist Frankie Moreno, and a surprise performance from the cast of Zumanity, The Sensual Side of Cirque du Soleil.

Sir Paul McCartney said, “As I said to George Martin at a rehearsal of the show in 2006, for me what is really strange about this is remembering writing these things, which is so little, little guitar, little piano, a little bit of paper and pencil on the back of an envelope, Sgt. pepper or something. It is such a little process and now look what happened to it. It’s incredible.”

Yoko Ono Lennon said, “John would have been thrilled to see the success of LOVE after 5 years. In fact, he would have been proud of how his music has been presented so beautifully and successfully by the partnership of The Beatles and Cirque du Soleil. The Beatles family members are getting together for this occasion in Las Vegas to celebrate this momentous occasion, and I am happy to be here.”

Olivia Harrison said, “It would have made George so proud and happy to be here on the fifth anniversary of our wonderful show in Las Vegas. Dhani and I, on Georges behalf, would like to congratulate Guy, all of the friends that we have made in the course of this journey, and, of course, the extraordinarily talented cast and incredibly hard working crew that have made this show possible. We look forward to being back here in five more years.”

Sir George Martin said, “The Beatles music is really some of the best music we’ve had in the last century. Children continue to rediscover the music, generation after generation. It’s like saying why is Gershwin timeless? Their music is part of history, it will last forever.”

Giles Martin said, ” ‘Within You and Without You’ is one of my most favorite scenes during LOVE. Musically, it was the first track that gave everyone the idea of what we were trying to achieve in the show. The act involves the audience – joining people together, something not expected, imaginative and fun – that is exactly what we were doing when creating LOVE.”

Dominic Champagne said, “The Beatles are far more than song and music. What they brought to our world is a smile and a kiss, and a way to hold hands and gather to dance around freedom, peace and love… Every night after the show you can feel it. No one wants to leave the universe their genius created. It has been a true privilege to be part of the magic.”

Daniel Lamarre said, “It is a privilege for Cirque du Soleil to be in a joint venture with The Beatles. To join forces with another creative team was a great experience for all of us at Cirque. From fans of The Beatles, we became partners… this is one of the most amazing journeys for all employees of Cirque du Soleil.”

Since its June 2006 premiere, LOVE has performed more than 2,000 shows for more than 4.3 million people. Recently named “Best Show in Las Vegas” by USA Today, LOVE has been voted “Best Show in Las Vegas” by the Las Vegas Review Journal for four consecutive years and continues to be a celebrity favorite. In February, The Beatles Grammy Award-winning LOVE album and ‘All Together Now’ documentary made their digital debuts, exclusively on iTunes.

LOVE celebrates the musical legacy of The Beatles and is presented exclusively at The Mirage in Las Vegas. The project was born out of a personal friendship and mutual admiration between George Harrison and Cirque du Soleil founder Guy Laliberte.