In this two-part feature, Simon Wittenberg heads States side to explore what Beverly Hills in California has to offer the discerning visitor.

The City of Beverly Hills, which sits on the outskirts of the bustling metropolis of Los Angeles in the USA, grew up around the world-famous Beverly Hills Hotel which was built in 1912. Ever since then, it has starred in numerous films and has been a magnet for the rich, the famous and the beautiful. 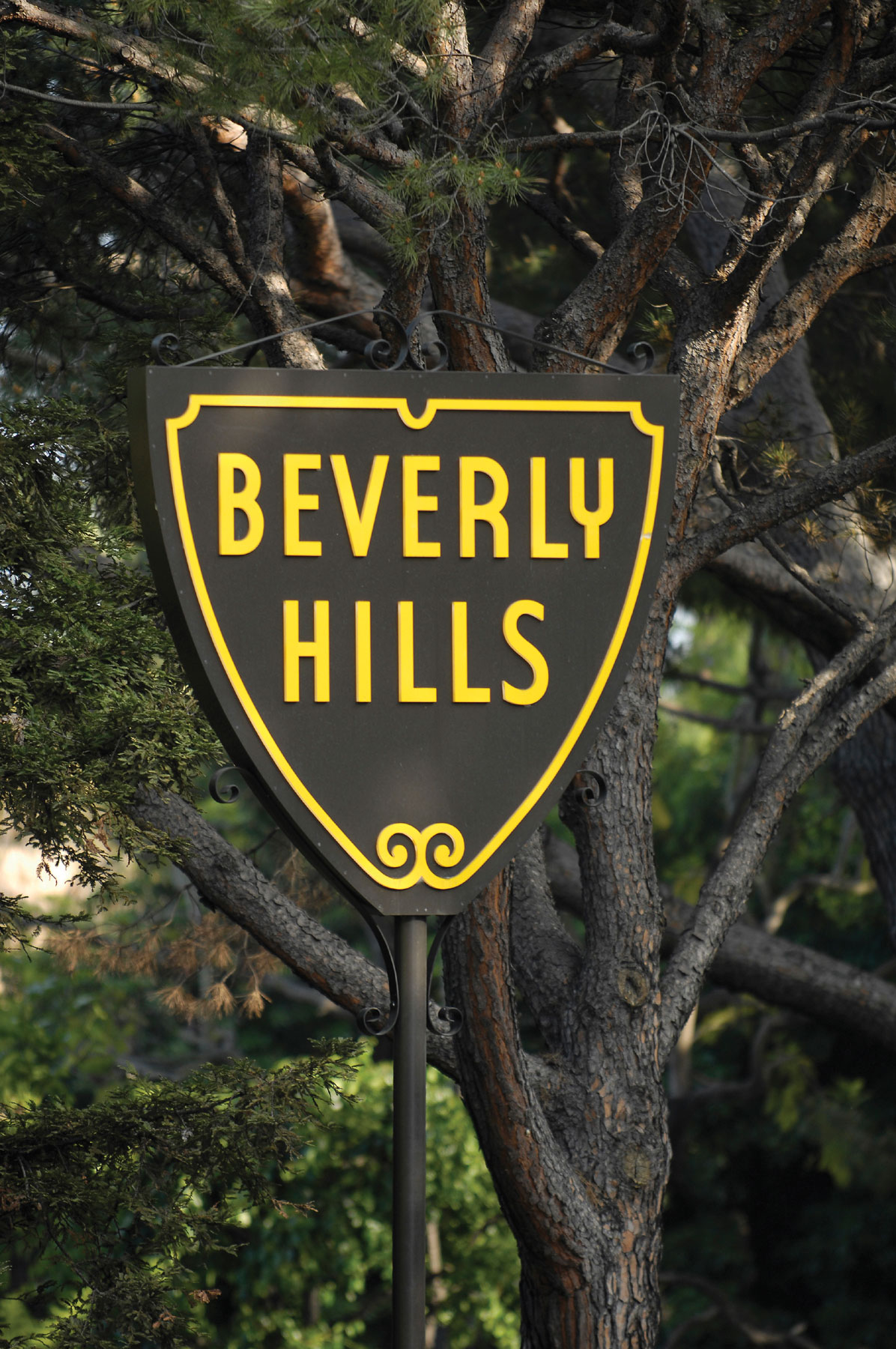 This is a place where people grow old with no facial wrinkles, supercars are two a penny, and where the sunshine and blue skies are pretty much guaranteed. Beverly Hills is an extremely accessible destination thanks to the numerous airlines which fly into LA’s international airport, one of America’s most important hubs. We enjoyed the award-winning service and superior comfort of Air New Zealand’s revolutionary Spaceseat™ in Premium Economy.

Over the last century, the city has been home to the likes of Fred Astaire, Charlie Chaplin and Ingrid Bergman, to name just a few of the many personalities who have resided there, and the desire to own a piece of real estate in 90210, one of the most exclusive zip codes, shows no signs of waning. Robbie Williams has just spent $32 million on a mansion with 22 bathrooms, whilst Sir Elton John has also recently invested in a sizeable property costing $2 million more, but settled for fewer wet areas, in exchange for the privilege of owning an eleven-car garage – not a bad problem to have. Beverly Hills itself is quite small in area at only six square miles in size, but within this pocket of wealth lies 35,000 residents, 14 parks, and of course, the renowned luxury boutique and palm-lined avenues of Rodeo Drive and Wilshire Boulevard. Here you can find some of the globe’s most revered marques such as Gucci, Prada, Louis Vuitton and Versace, standing side by side, with each bestowing their own very distinct street presence and shopping experience. 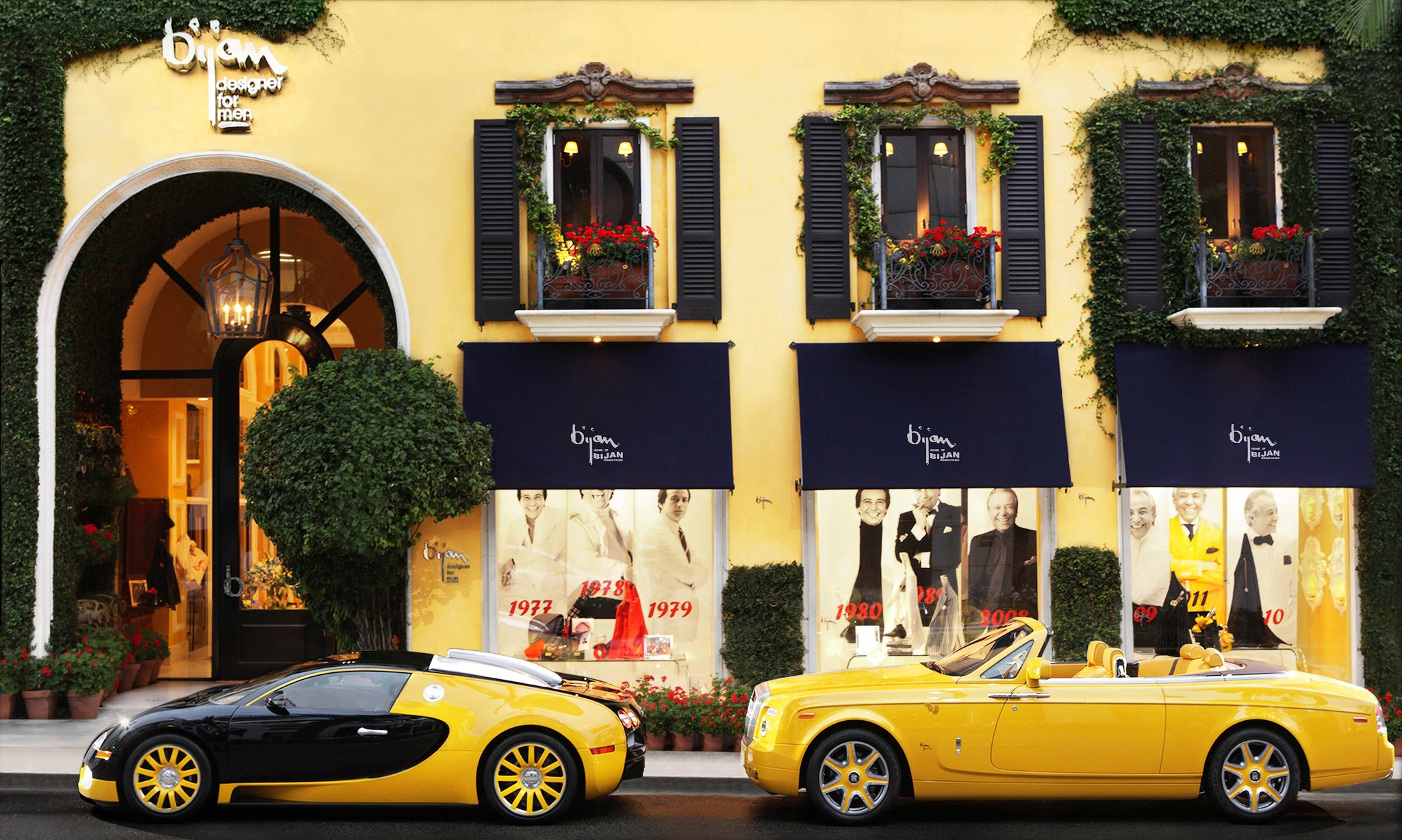 One of the highlights of Rodeo Drive for the Beverly Hills visitor is undoubtedly the House of Bijan, which sells the world’s most expensive menswear. Directly outside, either a convertible limited edition Rolls-Royce Phantom or Bugatti Veyron, decorated in Bijan’s eye-catching signature yellow colour scheme awaits. What’s more, it graces the company’s designated parking space which comes complete with the fashion designer’s insignia etched into the pavement. 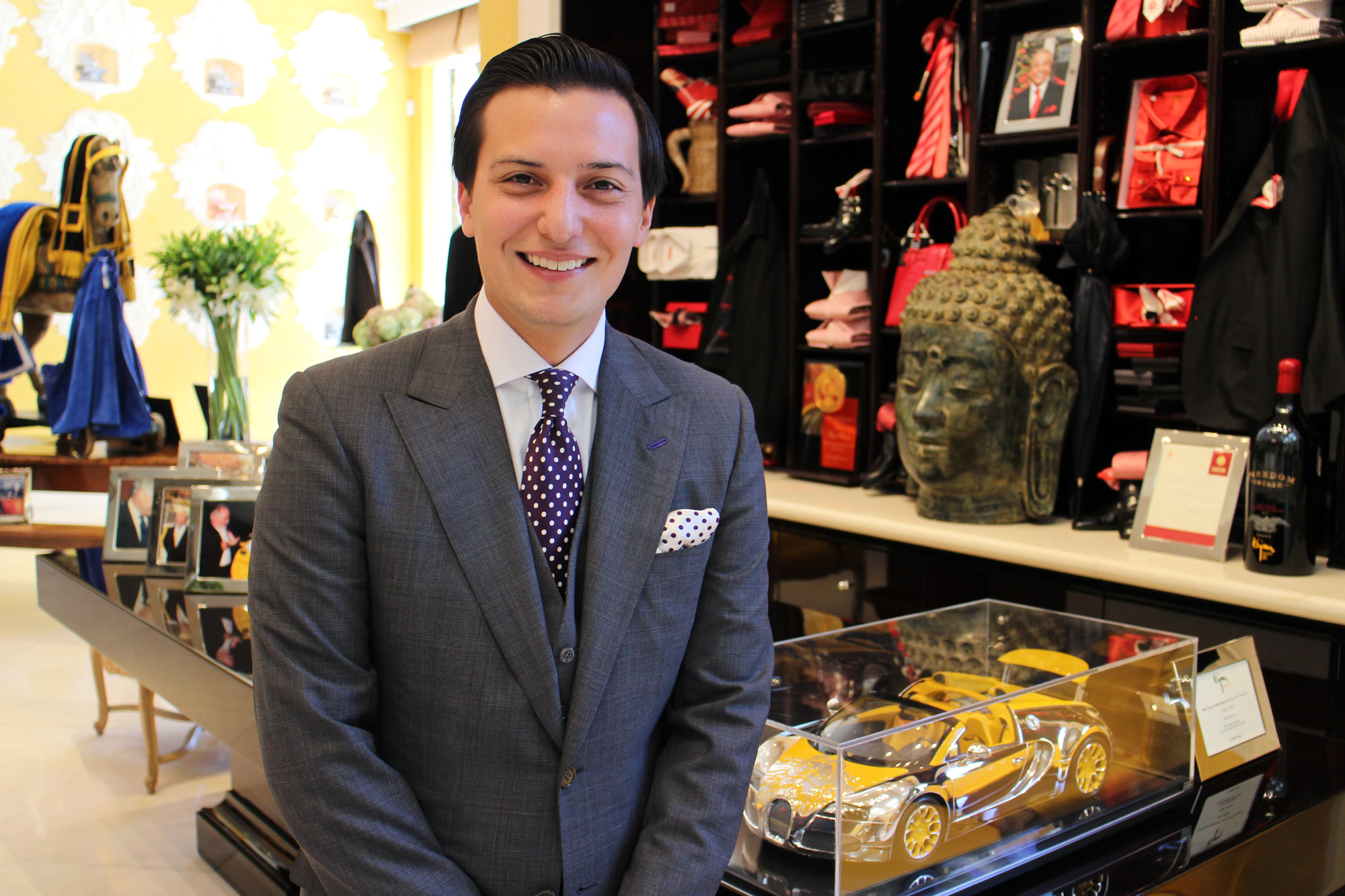 Established on Rodeo in 1976 by the late Iran-born founder Bijan Pakzad, and current partner Dar Mahboubi, when Beverly Hills was far from what it is today, all entry to the House of Bijan, which has been meticulously organised by different shades of garments, is by appointment only due to the nature of clientele that it serves. Bijan has dressed some of the globe’s most powerful and influential men, including the former Shah of Iran, Steve Wynn of the Wynn Las Vegas Resort and Country Club, the King of Saudi Arabia, the President of Ghana, and actors Arnold Schwarzenegger and George Clooney. 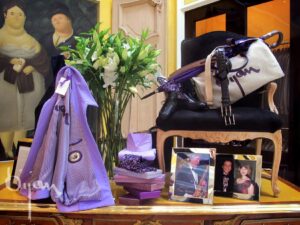 On the upper floor, there are numerous rows of silver frames housing autographed photos. Many have been loyal for 38 years, so much so that the House of Bijan is now serving the next generation of its existing customers, allowing the predominantly family-run business to attract a younger crowd than before.

The core philosophy of Bijan has always been that items of clothing, which are all handmade in Tuscany, Italy, are one-of-a-kind, or in the “extreme” case, there is a maximum of only two examples. Individually numbered tie sets retail for $950, whereas a jacket made with mink fur and alligator leather will set you back an eye-watering $195,000. This is a store where a client with specific measurements will order a set of 10 shirts and suits over the phone for a cool $1.8 million without even seeing them or trying them on, such is the trust in the fashion house’s exceptional quality and expertise.

For those exploring the sights of Beverly Hills which count the Witch’s House, the city’s 40-foot iconic sign and lily pond, and the Wallis Annenberg Center for the Performing Arts, five-star accommodation is in abundance, with the Waldorf Astoria, which is currently under construction, set to join the fold in 2017. We sampled two very different offerings during our visit to the city – AKA Beverly Hills and the Montage Beverly Hills, with both presenting equally compelling advantages. 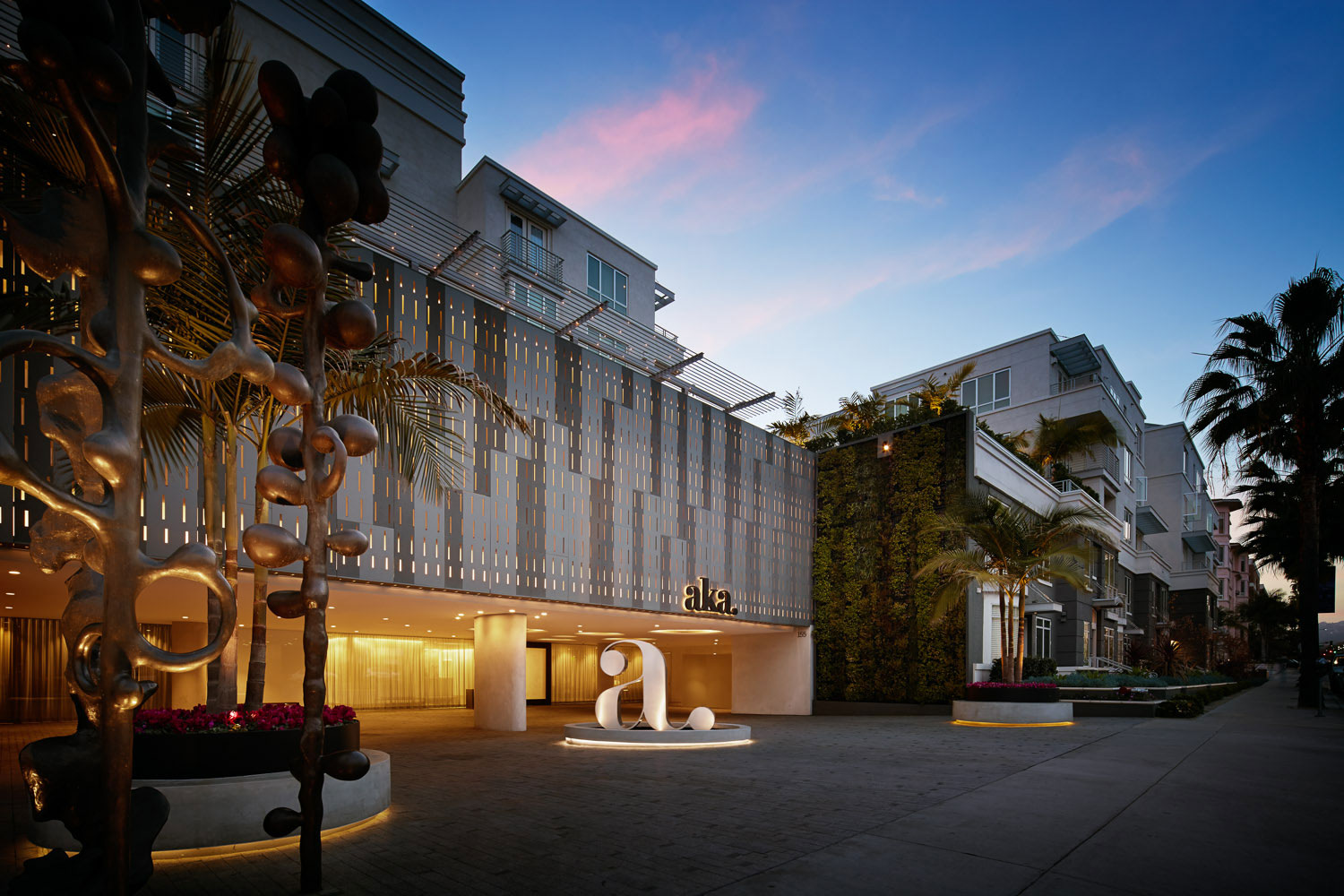 AKA Beverly Hills, which is conveniently located off of Wilshere Boulevard on North Crescent Drive, describes itself as a “luxury temporary residence”. Opened three and a half years ago following the purchase of high-end rental apartments which were abandoned following the economic downturn, AKA combines many of the amenities of a five-star hotel, but with independent living and anonymity. It attracts a diverse set of clientele who wish to stay in the city for short term (7 – 29 days) or extended periods (30 days+) such as celebrities, Middle Eastern nationals, those in between houses, and individuals recovering from plastic surgery, one of the area’s biggest earners. 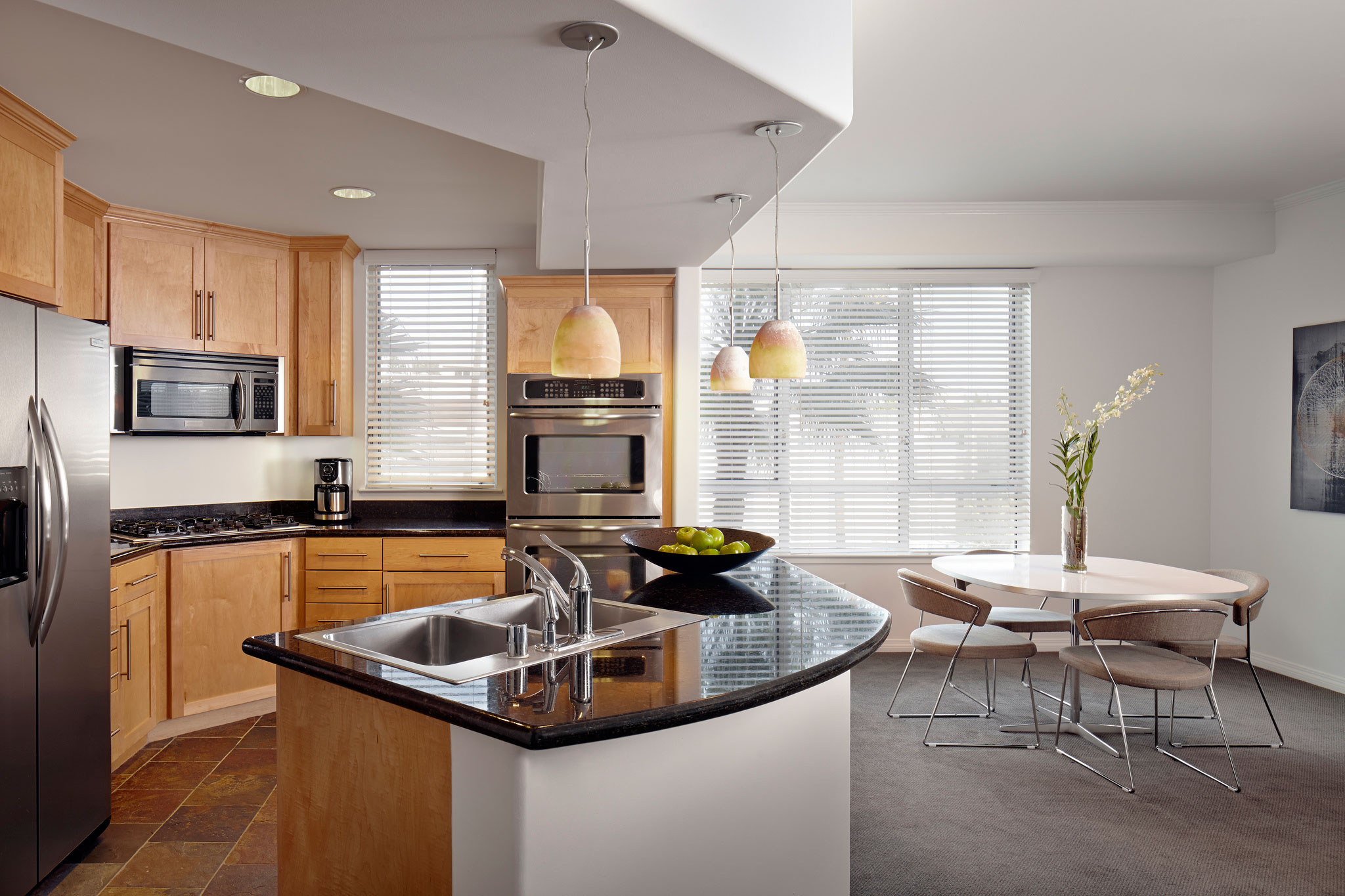 Supported by a 24-hour concierge, there are 88 stylish and fully furnished one (around 1,100 square feet) and two-bedroom suites (1,600 square feet), 1,800 square foot penthouses (costing from $1,200 per night in low season) and 12 townhouses which can accommodate pets. We stayed in one of the single bedroom suites offering a modern and minimalistic décor and an open plan layout decorated with abstract art. The generously equipped kitchen comes complete with a double oven and gas hob, a wall-mounted microwave and a large fridge freezer. This is accessed via the central living room which brings a dining area, soft seating and flatscreen TV, in addition to access to an outdoor private balcony for dining al-fresco. The bedroom itself houses a good sized walk-in wardrobe and is joined by a stone-lined ensuite bathroom with soft towels and Bvlgari accessories. There is equally complimentary and fast Wi-Fi throughout, with each suite boasting a dedicated network. 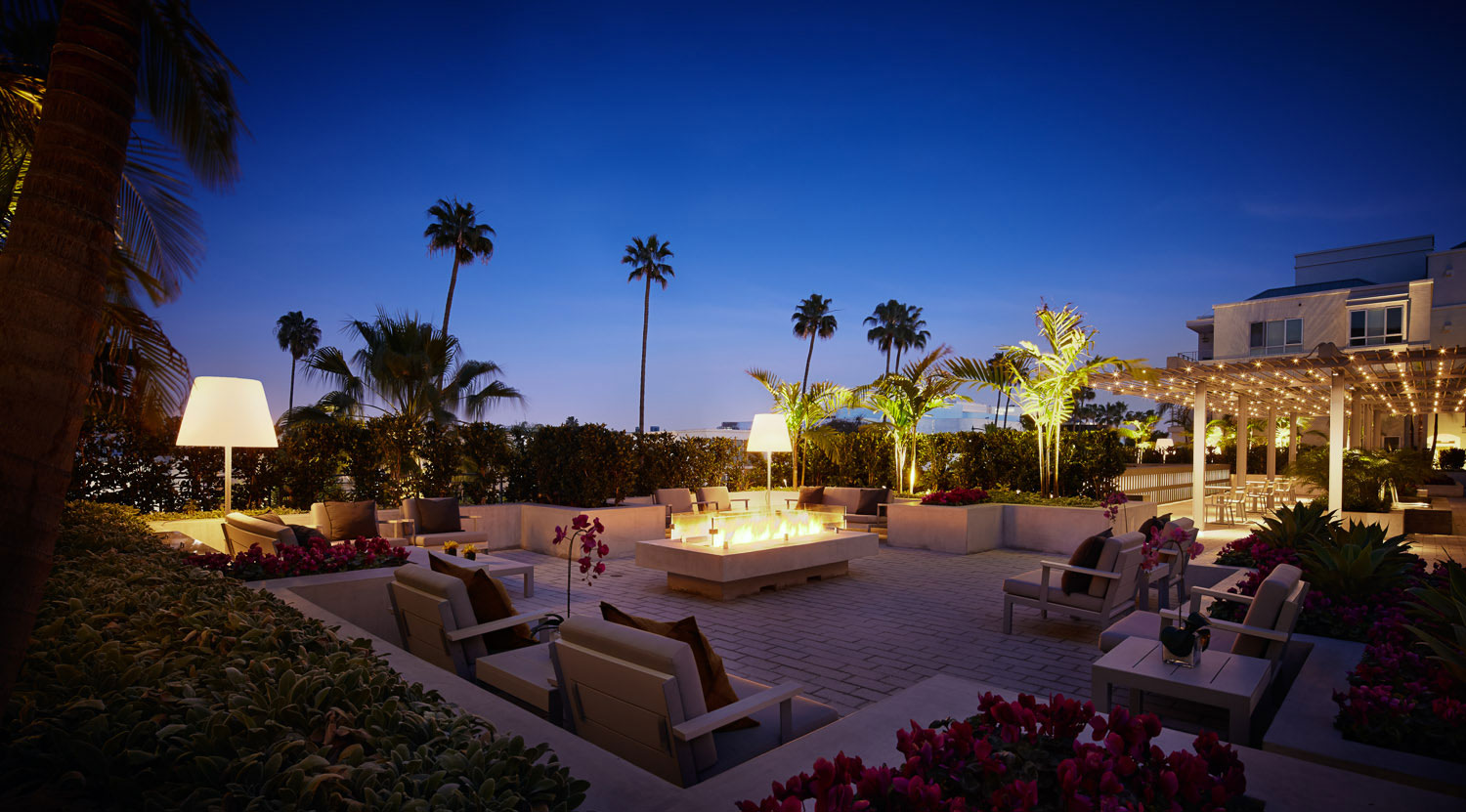 For individuals who wish to venture beyond the confines of their residence, AKA Beverly Hills has an impressive terrace on the third floor which treats visitors to ambient music, a water feature, and views as far reaching as the Hollywood sign perched on Mount Lee. In addition, there are branded bikes to pedal around the streets, a complementary car to undertake any journey within a two-mile radius, a 20-seater “a.cinema” which screens a movie every night, and AKA’s very own vodka which is distilled in-house for residents to sample. 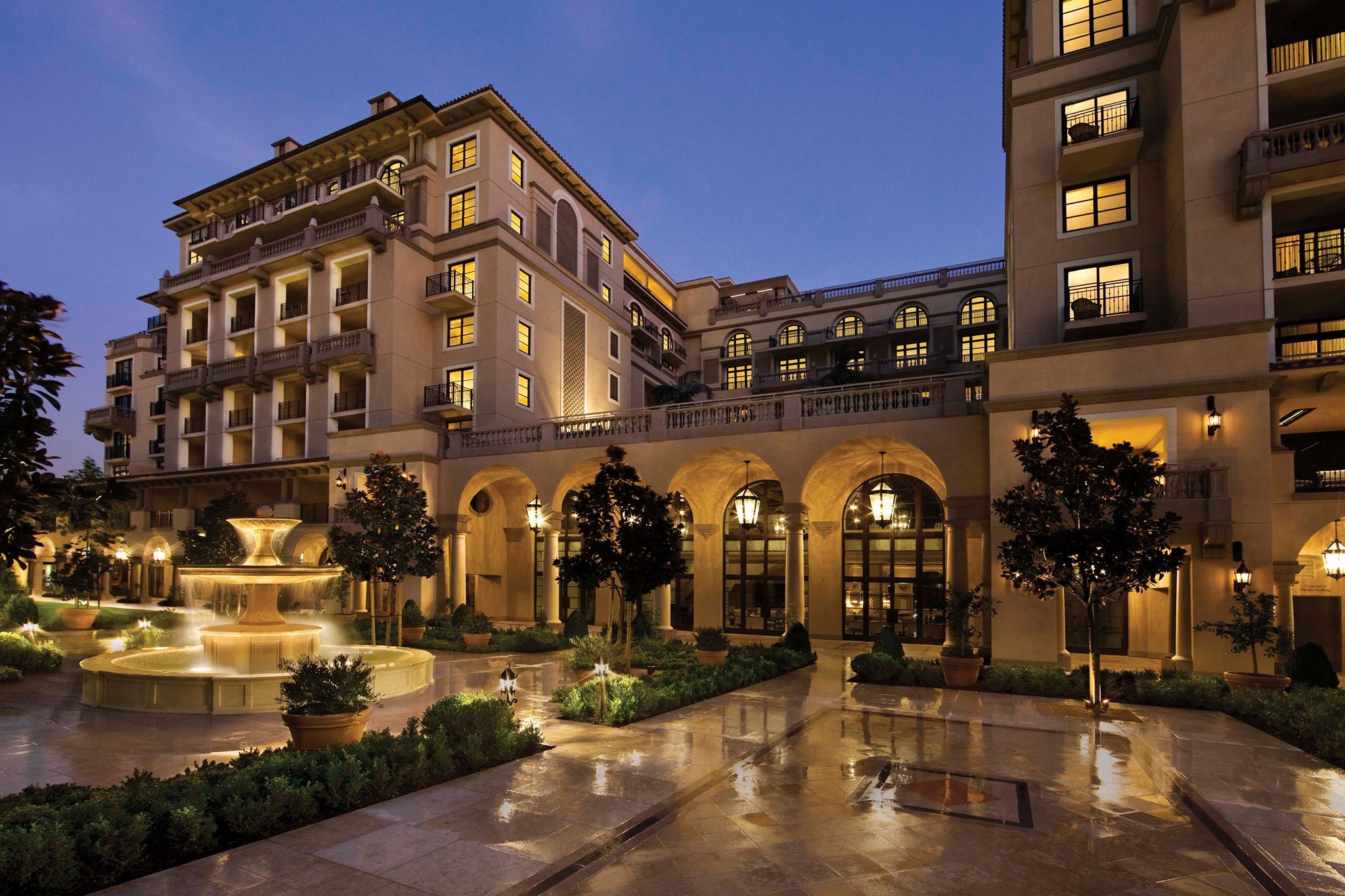 The $300 million five-star Montage Beverly Hills hotel on North Canon Drive (which lies a short walk away from AKA) is one of the newest properties built in the “Golden Triangle”, and in 2008, joined Montage Laguna Beach in the group’s portfolio. Occupying the land which once saw a car park and some derelict eyesores, the architecture of the Montage is “Moroccan-esque” if there is such a term, and is significant in size, as the original deal was to donate the building opposite to the city, which is designed in the very same style. 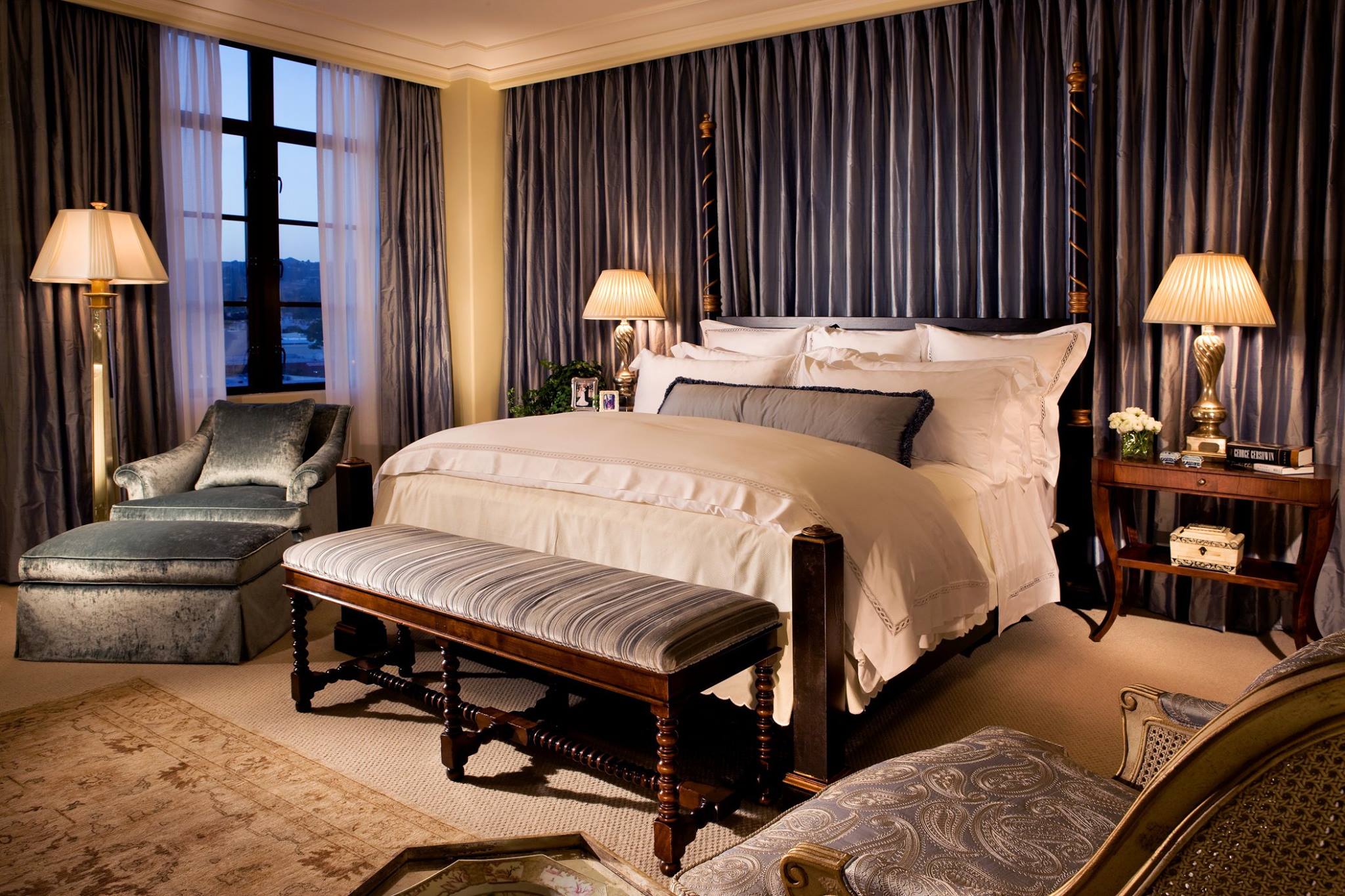 Visitors are welcomed by a busy crescent of some of the world’s most beautiful cars and illuminated palms, which only points to the start of what awaits inside. There is a total of 201 guestrooms and 55 suites, ranging from the standard 480 square foot classification to the more substantial Presidential Suite. We stayed in a Premier Guestroom on the sixth floor which was furnished with a king-sized bed, a unit housing a flat screen TV and a writing desk, in addition to a comfortable sofa-style seating area. All lighting is controlled at the touch of a button on a panel by the bed, meaning that you don’t have to hunt around searching for every switch before heading under the covers – a nice touch. The ensuite bathroom is equally as elegant right down to the mosaic tiling and LCD TV above the bath, and the twin sinks, which are surrounded by marble countertops, are generously dressed with luxurious toiletries from Seattle’s Antica Farmacista. 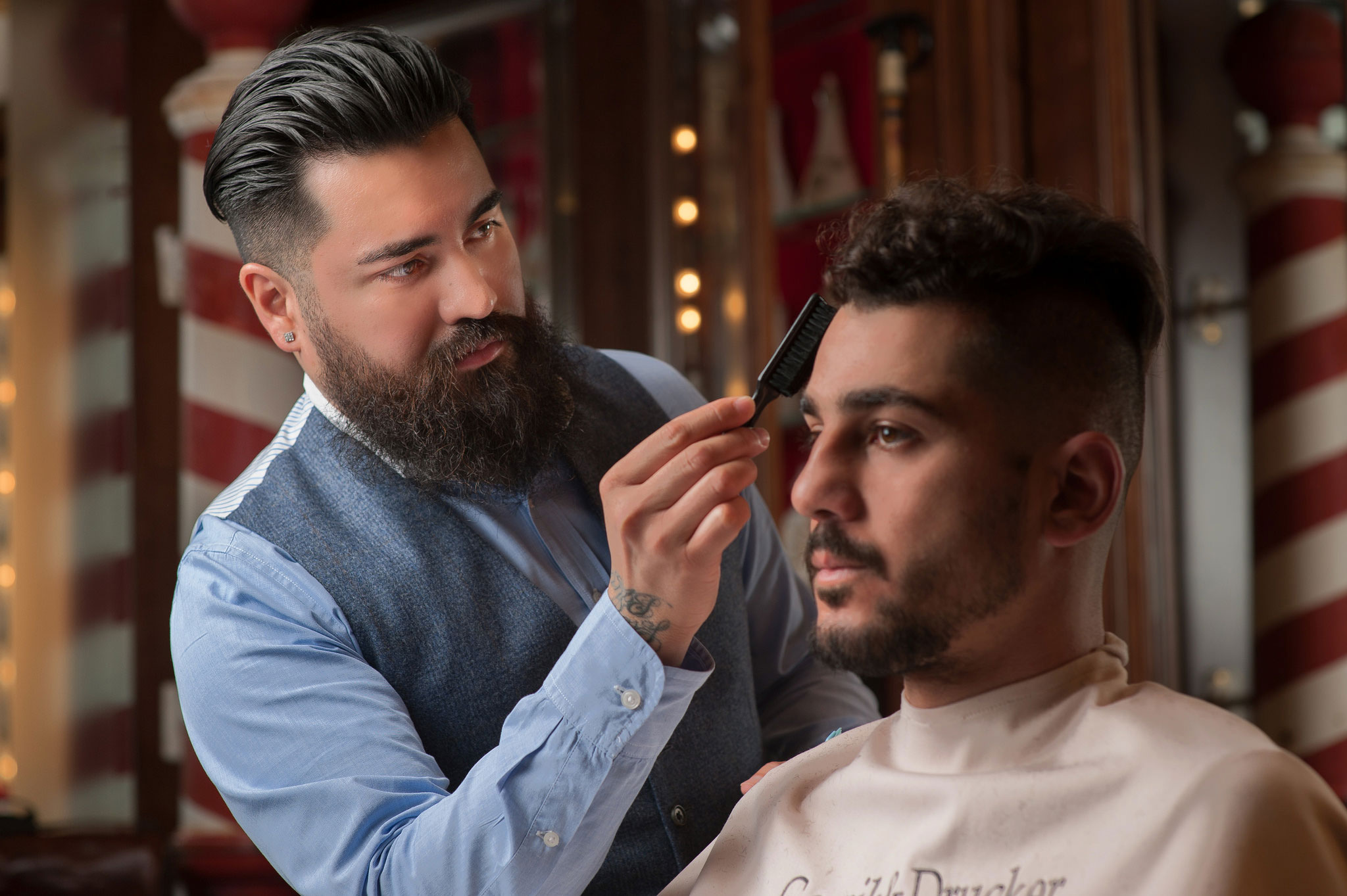 For the ultimate pampering, there is the on-site Gornik & Drucker barbershop, or the 20,000-square-foot Spa Montage on the third floor which has a comprehensive menu of treatments ranging from massages and facial therapies to wraps and experiences for couples. Within this tranquil Spanish colonial revival style inspired sanctuary, you can sit back and relax in the mineral pool or Jacuzzi, and reach over the side for an ice cold flannel or a glass of chilled water which has been subtly infused with raspberries and slices of cucumber. Alternatively, you can immerse yourself in the heat of the Turkish steam room and sauna. 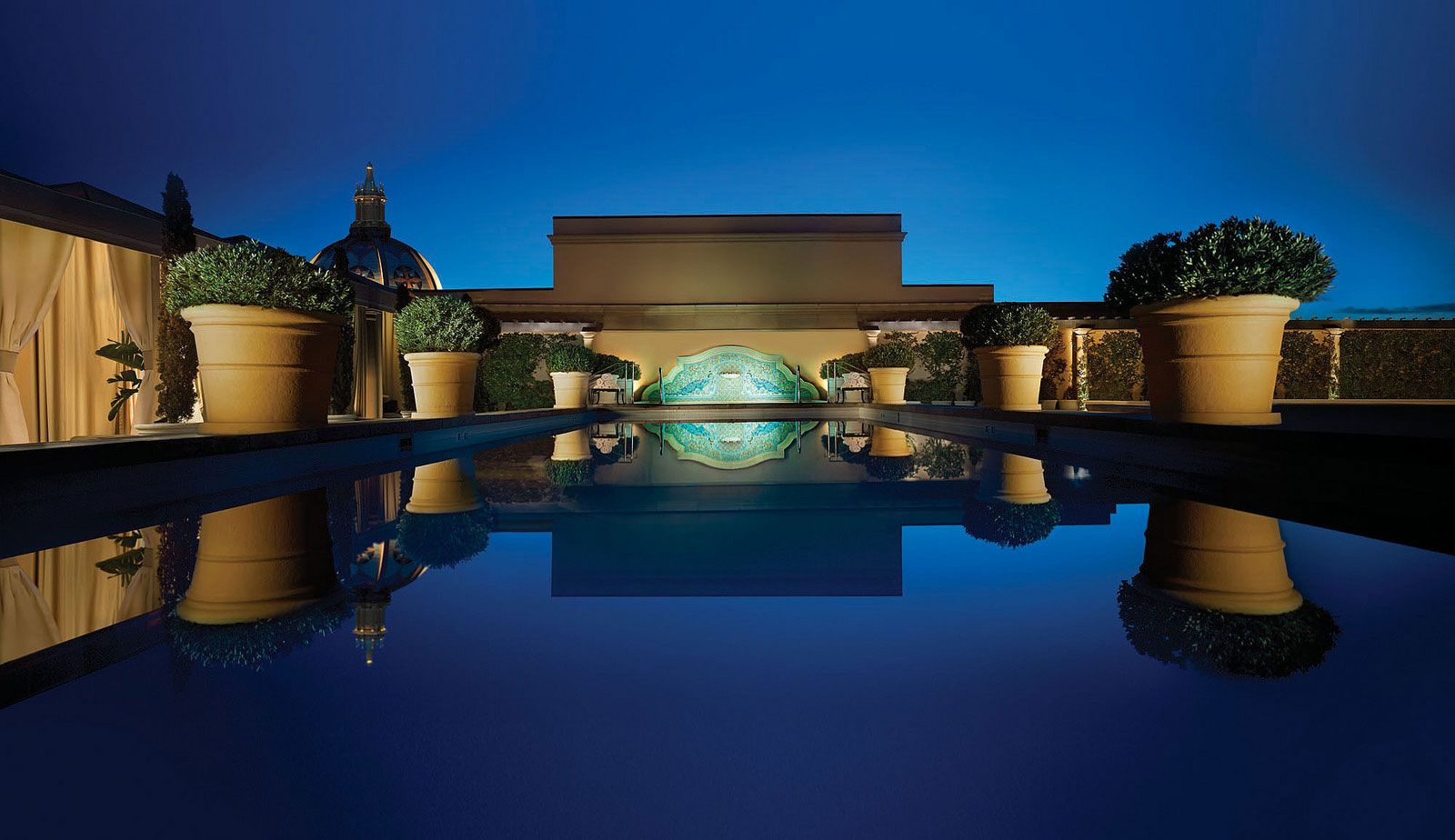 For a swim in the open air, there is the rooftop pool which comes with a glorious panoramic vista of the Beverly Hills and Hollywood landscape. This is where you have a tough decision to make as to whether you recline on a lounger, share the seclusion of a cabana with a friend or loved one, or sip one of the many refreshing cocktails, such as a Piña colada in a freshly skinned coconut, all against the backdrop of a magical sunset…

Beverly Hills – Where and How?

Return flights from London to Los Angeles on Air New Zealand start from £404 per person in Economy and £961 in Premium Economy. For the most up to date fares to LA, please visit www.airnewzealand.co.uk/cheap-flights-to-los-angeles.

With thanks to the Beverly Hills Conference & Visitors Bureau for their hospitality (www.lovebeverlyhills.com).