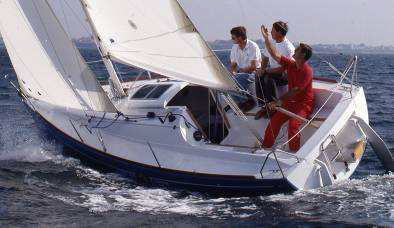 Although we generally agree that 20 is the best time of life, because it is an age when everything is possible, it is often different for boats. Yet this is exactly what is happening with the First Beneteau 21.7 Yacht , which will celebrate its 20th anniversary in 2012, by continuing to look unashamedly young.

Born in 1992, and named the First 210, this Finot-Conq plan took inspiration from the trends of the times to develop – First 211 in 1998, First 21.7 in 2004 and 21.7 Yacht in 2007 – and accomplish an outstanding career that could bring it into the pages of the Guinness Book of Records. The Beneteau 21.7 Yacht is small in size but colossal in its unanimously acclaimed qualities, this yacht is the pride of its owners.

Nearly 3,000 boats now sail the seas the world over and the owners’ associations are all very lively. The timeless design of this small boat, a benchmark in its category, succeeded in attracting both keen young sailors thinking about their first buy and the over seventies far from having said their last word at sea!

The Beneteau 21.7 Yacht  – As simple as a great idea
In its first version, the First 210 pioneered a new generation of small coastal cruisers. Immediately considered to be fun and efficient, her harmonious and highperforming hull, canting keel and the precision of her twin-rudder were of instant appeal. Her blue hull made her look young and stylish, a feature she has never lost. 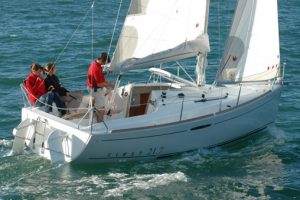 The immediate success, confirmed year after year, of the boat nicknamed “the sea scooter”, encouraged Beneteau to make changes to her in 1998. It was given the addition of an anchor locker, a detail which showed just how much this small yacht had become a cruising companion.

In 2004, you felt just as much as ease on this small cruiser. She demonstrated all her talent in matchtests when faced with contenders who found it difficult to surpass her. At the time, there were a thousand on the water and for Beneteau, although this boat had to continue to stay in tune with the times, they had no intention of touching the basic design: the interior of the First 21.7 saw an increase in space and comfort, and the hull portholes were lengthened, both characteristics of the new First range, giving her a boldly contemporary style.

The fourth version, which came into being in 2007, and named the First 21.7 S, continued to cause a lot of ink to flow in the specialized press. The buoyancy tanks were removed, making it more pleasant and comfortable to live on board this 6.50 m cruiser and making family sailing enjoyable. It would be impossible to achieve this feat of longevity without outstanding seafaring qualities.

The Beneteau 21.7 Yacht  is celebrated as much as a new boat
Along with the latest ultra-innovative models to be shown at the upcoming boat shows in Paris and Düsseldorf, a dedicated platform will welcome all the visitors and the press to discuss viewpoints and wonderful stories around the First 21.7, sitting in its cradle. The architects Pascal Conq and Jean-Marie Finot will also be present.

Beneteau is looking forward to a new opportunity to illustrate the company’s positioning, the success of which is built from its ability to innovate as much as to perpetuate great ideas.