With just a matter of weeks to go until the final unveiling of Ducati’s brand new 1199 Panigale at the EICMA International Motorcycle Show in Milan (10-13 November), the Italian manufacturer now reveals the secrets behind the awesome power of its 2012 Superbike. 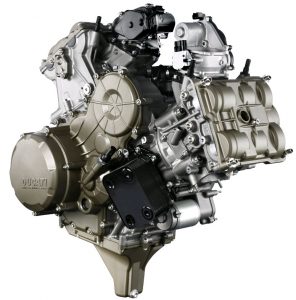 The most extreme benchmark ever
Ducati’s latest engine, the Superquadro, goes beyond the barriers of engineering to enable the introduction of a futuristic Superbike today. Its no-compromise approach to design, combined with Ducati’s Italian innovation has now set the most extreme benchmark ever and stands as the latest milestone in Ducati’s long and iconic history of Superbike engines.
Ducati engineers were given a near impossible design brief to create the new generation Superbike engine for the Ducati 1199 Panigale. Increase power, torque and user-friendliness and reduce overall vehicle weight and scheduled maintenance costs seemed impossible tasks, but given a “blank canvas” to create the new power-plant and encouraged to think outside-of-the-box to achieve the unachievable, engineers have finally ticked all the boxes.

The innovative Superquadro engine, so called because of its massively over-square bore and stroke ratio, has increased power to an absolute production twin-cylinder milestone of 195hp and torque to 98.1 lb-ft (13.5kgm) with user-friendly Riding Modes that deliver that power appropriate to the rider’s style and environment. Its construction has enabled a radical reduction in overall vehicle weight and, further identifying Ducati’s constant pursuit of performance perfection, major services have been extended to 24,000km (15,000 miles). Only Fabio Taglioni’s masterpiece 90° L-twin configuration and Desmodromic valve control have been retained from previous engines. Everything else is new.

Engine architecture
With the engine designed to be a fully stressed member of the chassis, its architecture has been completely re-calculated to provide the best possible vehicle construction for layout, weight distribution and strength.

The cylinders, which remain at 90° to each other, have been rotated backwards around the crankcases by a further 6°, until the front cylinder is 21° from horizontal. This has enabled the engine to be positioned 32mm further forwards for improved front / rear weight distribution in addition to perfectly positioning the cylinder head attachment points for the 1199 Panigale’s monocoque frame.

The crankcases, which are vacuum die-cast using Vacural® technology to ensure optimal weight saving, consistent wall thickness and increased strength, also incorporate in their form the outer water-jacket of the “cylinder”, eliminating the jointing face that used to exist at the base of the cylinders. Instead, the Superquadro has separate nikasil-coated aluminium “wet-liners” inserted into the tops of the crankcase apertures. This design enables secure fixing of the cylinder head directly to the crankcase, improved sealing and enhanced heat dissipation from the thin cylinder-liners directly into the surrounding coolant.

The primary-drive casing, clutch casing and outer cover, sump and cam covers are all cast in magnesium alloy, ensuring a lightweight engine despite its increased strength as an integral part of the chassis.

In addition to cylinder position, the crankcases now use shell main bearings for the crankshaft, previously only used by Ducati on the  Desmosedici RR engine. Removing the roller bearings has enabled an increase in diameter of the crank journals for enhanced rigidity and an increase the crankcase section around the main bearing area for improved strength in line with the Superquadro’s extreme power output. The shell bearings are force-fed oil from internal drillings within the main bearing pillars to keep the new crankshaft well lubricated and is quickly scavenged back into the sump with the introduction of a new Ducati feature, a highly efficient MotoGP-style vacuum pump.
The pump is driven by the main oil pump shaft and effectively maintains constant vacuum in the crankcase area below the pistons, reducing atmospheric resistance during the down-stroke of the piston and controlling the internal “breathing” of the engine.

Extreme dimensions
In calculating the optimum configuration to achieve the next big step forward in power output for the L-twin engine, Ducati and Ducati Corse engineers increased engine speed and enhanced breathability with the incredible bore and stroke of 112mm x 60.8mm. The intense study of power and ridability resulted in an output of 195hp @ 10,750rpm and 98.1 lb-ft (13.5kgm) @ 9,000rpm. The new bore and stroke ratio of 1.84:1 effectively increases rpm with the ultra-short stroke of the crankshaft and increases the cylinder area to enable increased valves diameters. Inlet valves have increased from 43.5 to 46.8mm and exhaust valves from 34.5 to 38.2mm. With such large inlet valves operating at higher rpm, the intense inertial forces have been controlled by using titanium instead of steel, a solution only previously used on full “R” models. The new valves are actuated by racing-derived rocker arms, ‘super-finished’ for reduced friction and fatigue and then coated in polymeric-like carbon (PLC), a process originally developed for the aerospace industry.

The race-derived Superquadro pistons have a distinctive double-ribbed undercrown to achieve high strength and reduced friction by using minimal piston wall surface area. Using technology developed by Ducati Corse, the design enables reliable operation of the 112mm diameter pistons when performing at high rpm. The improved volumetric efficiency of the increased inlet valve diameters is further capitalised on by increasing the oval throttle body dimensions from an equivalent diameter of 63.9 to a massive and highflowing 67.5mm. The Ride-by-Wire throttle bodies feed air across twin injectors per cylinder, one positioned below the butterfly for enhanced flexibility and one above for outright power.

Clean power
With such enhanced “breathing”, the challenge for the Superquadro’s Design Engineers was to program performance-optimised fuel mapping for a smoother cycle-to-cycle engine operation, without compromising emissions. To achieve this, Ducati introduced a secondary air system that completes the oxidisation of unburned hydrocarbons and effectively reduces HC and CO levels. The system is activated when the engine ECU recognises specific conditions in the engine’s operation via the lambda and throttle opening sensors. It then opens a valve enabling a flow of clean air from the main airbox to a reed valve situated in each cylinder head, which enables one-way flow into an air gallery exiting into the exhaust port close to the exhaust valve. Entering the hottest point of the exhaust gasses, the fresh charge of air enhances the burn environment, eliminating any unburned fuel that escapes during the exhaust cycle under certain conditions.

Desmo dependent
With such an extreme engine, never before has Ducati’s unique Desmodromic system been so vitally important. With the high engine speeds at which the Superquadro operates combined with such large valves, it would be impossible for the valve’s rocker-arm to follow the steep closure profile of the cam lobe using normal valve closure springs. The Desmo system actuates valve closure mechanically with the same method and accuracy as it opens, enabling steep cam profiles, radical cam timings, large valves and high operating speeds. This system is used on every single Ducati motorcycle and is constantly proven on Ducati Corse’s World Superbikes and Desmosedici MotoGP bikes.

The power of precision
Controlling such large valves with the precise Desmodromic system also led engineers to replace the original belt-drive concept, used since the introduction of the Ducati Pantah in 1979, with a combined chain and gear-drive arrangement. The conventional bush-type chain runs from the crankshaft to the cylinder head where a single sprocket positioned between inlet and exhaust camshafts, is attached back-to-back to a gear wheel mounted on its own short, dedicated shaft. The attached gear meshes directly with gears on the ends of both the inlet and exhaust camshafts, which are also designed with +/- position adjustment for ultraprecise cam-calibration. The cam chain, therefore, provides highly efficient point-to-point drive route and, tensioned automatically, provides continuous reliability and further reducing the cost of routine maintenance.

On the end of each exhaust cam drive gear is a centrifugal flyweight which retracts at speeds below tickover to rotate a “protrusion” from the concentric section of the cam, thus creating sufficient inlet valve lift to act as a de-compressor. This ingenious device enables the Superquadro engine to be started easily without using a larger battery and starter motor, which has reduced overall vehicle weight by approximately 3.3kg (7.3lb). When the engine starts and the camshafts begin to rotate at tick-over speed, the centrifugal flyweight flicks out, retracting the “protrusion” back into the cam and allowing complete valve closure for full compression. This innovative feature further underlines the lengths to which designers and engineers have worked together in the single-minded pursuit of weight-saving.

New transmission
Ducati’s engineers also capitalised on the opportunity of the “blank canvas” project to increase dimension between the centres of the six-speed gearbox shafts, enabling larger diameter, stronger gears to transmit the enhanced power output. New for a top-of-the-range Ducati Superbike is a “wet”, oil-bath clutch. Based very closely on the design of the Multistrada and Diavel components, the clutch assembly features a “slipper” function and a progressive self-servo mechanism that compresses the friction plates when under drive from the engine. While enhancing frictional efficiency, this also results in a rider-friendly light clutch lever “feel” at the handlebar. Conversely, when the drive force is reversed (over-run), the mechanism reduces pressure on the friction plates, enabling a true racing “slipper” action, reducing the destabilizing effect of the rear-end under aggressive down-shifting and provide a much smoother feeling when closing the throttle or down-shifting under normal riding conditions.

Performance perfection
Competition is the platform on which Ducati has always challenged and measured itself. It is a discipline for designers and engineers and the bedrock of motivation for a company in which the constant desire for victory has become a way of life. The Superquadro is the most powerful twin-cylinder production engine on the planet and is destined to power the new Ducati 1199 Panigale with absolute performance perfection. 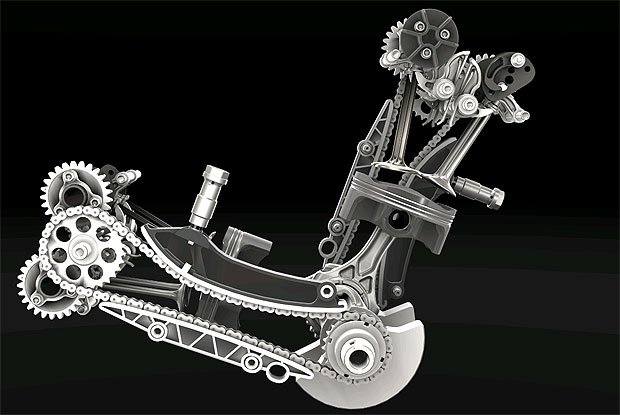