An iconic building of the St Petersburg landscape, Grand Hotel Europe and its elegant historic Lobby Bar has long been a fashionable meeting point.

Now after an extensive two month renovation, the Lobby Bar has re-launched to reveal a fresh new contemporary decor, whilst retaining elements of its original historic charm that, over the years has entertained the likes of Pyotr Tchaikovsky, former US President Bill Clinton and Queen Elizabeth II. 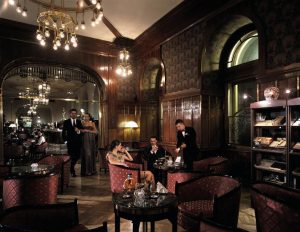 Presented with a brief to refresh the original protected features of the bar and to add a modern twist, designer Michel Jouannet who has also worked on many of Orient-Express’ other properties, has created a cool and sophisticated bar design that blends seamlessly with the historical elements of the hotel. The bar’s exquisite original Art Nouveau décor, including the stained glass panel windows and gilded stucco ceiling have been meticulously refreshed and the rich red leather and antique gold of the new soft furnishings are a contemporary reflection of the more classical elements of the bar such as the marble floor, wooden wall panels and antique tiled mantelpieces.

All eyes will be on the centrepiece of the new design, a 10 metre long feature bar made from spectacular illuminated alabaster marble topped with glistening black granite, designed to give the impression of ice. Glistening glass ice wells adorning the bar are stocked with fine champagne and Russian vodkas and are under lit with LED lights which glow through the ice, creating an intimate and sophisticated mood where fashionable guests, visitors and St Petersburg residents alike can gather and sip on one of the new cocktail creations.

To accompany the new look of the bar, the drink and food menu also welcomes some new additions that include twists on modern classics such as a Russian Long Island which sees the usual Long Island mix of vodka, rum, tequila and gin simply replaced with a good measure of silver filtered Russian Standard Platinum vodka shaken with Cointreau, lemon and cola, served tall in a sling glass garnished with raspberries. The Pushkin Milk Punch is a one drink snapshot of Russian history and literature with its warming combination of white rum, port, orange bitters, earl grey tea and condensed milk topped with caramelised brown rum sugar. The drink references Alexander Pushkin’s 1833 poem The Bronze Horseman, which mentions a hot punch, as well as giving a nod to St Petersburg’s founder Peter the Great, who first imported white rum to Russia. As its name would suggest, the Parfumer cocktail is an exotic fragrant blend of kumquat, lime, pomegranate and cinnamon with vodka making a refreshing long drink.

Nightly rates at Grand Hotel Europe start from 11900 Roubles (approx £302) per night including VAT based on two sharing a Superior King Room.