Luxurious: Your break though role came in the movie ‘Kaho Naa… Pyar Hai’ which went on to become the years highest grossing movie and won you two Filmfare awards. How did this make you feel and did this new found fame make you excited or nervous?

Hrithik Roshan: It was totally exhilarating – to receive such a great response from the public, as well as critics. I certainly wasn’t expecting it and I guess I was simultaneously excited and nervous – excited about what the future had in store and the next film project, and nervous about living up to, if not exceeding, the expectations and precedent that my debut film (as a lead actor) had set.

Luxurious: Looking back at your career to date, what piece of work have you been most proud of, and outside of movies what would you regard as your greatest moment?

Hrithik Roshan: In honesty, all of my films are very precious to me. They were all significant milestones in my career journey and took me to new territory, in so far as allowing me to push my boundaries and explore new things. If I had to single out any particular films though, Jodhaa 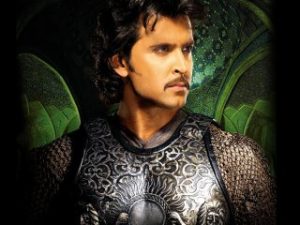 Akbar and Guzaarish are certainly films I am proud of.

Outside of films, although I guess it is related to my work in the industry, unveiling my wax figure at Madame Tussauds, London was a truly great moment. It felt like the culmination of all of my achievements till that point in my life, overcoming the setbacks and challenges along the way, had now been marked by this beautiful milestone which was so humbling. It was very emotional for me to see my life achievements manifested in such a breathtaking way – it really did leave me speechless!

Luxurious: You are renowned for your acting ability. Would you describe yourself as a ‘Method’ actor or more of a classical form of actor?

Hrithik Roshan: Certainly a method actor. I really have to immerse myself into the skin and soul of that character, living, eating and breathing everything about them. I guess it’s a little unfortunate for my wife and those around me, as I completely go into my zone, giving the role my complete focus and concentration. It’s a very intense period, which is why it is conditional that I only commit myself to one film at a time.

Luxurious: ‘Zindagi Na Milegi Dobara’ is due to be released in July, tell us about the film and some of your favourite memories whilst filming.

Hrithik Roshan: It’s a completely fresh offering in terms of Indian cinema. It’s a beautiful, humorous and extremely human road trip film which takes three male friends on the ultimate bachelor party trip across Barcelona. Unbeknownst to them on embarking on the trip, it ends up being a journey of self discovery for each of them in different ways and forces them to re-evaluate their lives.

You know, the entire project was a joy so it is hard to pinpoint any specific memories. I was working with some wonderful talent – both cast and crew, including two dear friends (the director, Zoya Akhtar and her brother, one of my co-stars, Farhan Akhtar). We were filming in such a beautiful location, company was great (cast and crew) and we enjoyed many an evening together after we’d wrapped filming for a day – eating good food, sharing stories and anecdotes, and laughs aplenty.

Luxurious: Hrithik, many congratulations on the unveiling of your waxwork at Madame Tussauds earlier this year. I’ve seen the pictures and think it’s an incredible likeness, what were your thoughts when the waxwork was unveiled to you?

Hrithik Roshan: I was completely taken aback and lost for words. The likeness was uncanny! Even though I had been involved in the creative process, having some input in terms of the ‘look’ the figure would present (my look from the film ‘Dhoom 2’) and I took part in three sittings – two in Mumbai as well as a further sitting in the West London workshop – I had no idea what the final figure would look like. Looking at the eyes, it felt like the figure had a soul of its own. I was astounded and it certainly exceeded my expectations. My family were also at a loss for words. It was an extremely proud moment for us collectively.

In Conversation with the Bowes-Lyon Partnership Founder Hayley Bystram