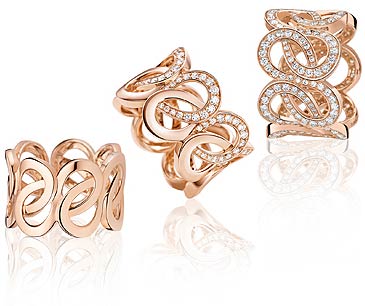 The inaugural Montblanc High Jewellery collection, centred on the enduring image of the rose, quintessential expression of femininity, was launched at a spectacular gala at the Opera Garnier in Monte Carlo, in September 2011. Now two new, dynamic, contemporary collections take the emotive, evocative rose petal as their theme and design direction.  The sensuality of the petal, its velvet touch, lilting, voluptuous softness and its spirit of freedom are interpreted and stylised through superlative artisanship, in fine diamonds and pink gold, turning the ephemeral into the eternal.

The two fine jewellery collections continue to pay homage to the timeless iconic elegance of Princess Grace of Monaco, who, like the rose she so adored, was the epitome of classic beauty; the pink rose, Grace de Monaco, created in 1956, to commemorate her marriage to H.S.H. Prince Rainier III, was, she said, the most wonderful of all her wedding presents.

Just as she embodied a modern-day fairytale, so the rose and the rose petal have been integral elements of so many fables and fairytales through history.  Now they evoke a modern magic and mystique, as the light, openwork petal forms, outlined or paved in diamonds, and echoed in soft pink gold, are playfully scattered, joyfully jostling each other, or intimately interlaced, with energy and spontaneity.  As if the jewelled rose petals float on the breeze or the skin; a contemporary statement of confident soignée sophistication, Princess Grace style.

Each collection, hand-crafted to the highest standards of excellence for which Montblanc is renowned, has its own distinct personality: Pétales de Rose motif, in white gold and diamonds, is a modern take on timeless classic style, underpinned with emotions, the enchantment of the rose petal and the effortless impeccable glamour of Princess Grace Pétales Entrelacés motif in rich pink gold, alone or highlighted with diamonds, is powerfully dynamic and exuberant.  A collection, young at heart, that exudes a sense of the casual, easy, everyday opulence that characterises precious jewellery today.  Reflecting the warmth and radiance of Princess Grace’s personality, both collections recall the jewels that were so much a part of her legend and persona, of both the movie-star and the princess. Yet, as the most personal of possessions, these are jewels that express her essential femininity, as a woman, a Princess, a wife, mother and philanthropist. The Pétales de Rose and Pétales Entrelacés motifs collections will be unveiled during the Salon International de l’Haute Horlogerie 2012 in Geneva, together with prestigious Watches and Writing Instruments completing Montblanc’s tribute to Grace Kelly. 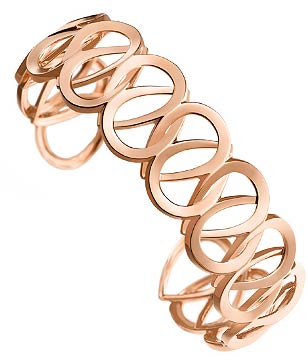 Montblanc and Monaco
With the Pétales de Rose and Pétales Entrelacés motifs collections, Montblanc cements its close, ongoing connection to the Principality.  The relationship began in 2007 with the design of a spectacular limited edition skeletonized fountain pen to celebrate of the life of the late Prince Rainier.  Montblanc donated half of the proceeds from sales of the pen to the Princess Grace Foundation, a non-profit organisation dedicated to discovering and nurturing emerging talent in the fields of theatre, dance and film; Princess Grace cared passionately about encouraging others to reach their potential. On the night before the OSCARS in Los Angeles 2011, Montblanc invited guests to sign a ‘wish wall’ scribed with heartfelt messages dedicated to the Princess. And in July 2011, Montblanc designed a sumptuously precious and bejewelled white gold writing instrument adorned with 161 rubies and 128 diamonds to celebrate the marriage of H.S.H. Prince Albert II to H.S.H. Princess Charlene.  This unique commemorative gift was used by the newly-weds to sign their wedding register.

The rose petal
The rose, the most allusive and emotive of flowers, capable of conveying deep emotions, has a rich legacy, reaching back some 5000 years, to ancient China, where it was highly prized for its beauty and fragrance.  In the East, ladies used to carry rose petals in bags or pouches.  The rose reached Europe at the time of the Roman Empire, and in later ancient civilizations, roses were widely cultivated, their petals showered in

clouds onto guests at banquets or thrown in the path of processions. New European species were developed and nurtured from the 17th and 18th centuries – the Russian Empress Catherine the Great ordered guards to protect her specimen roses- and the early 19th century brought a golden age of rose-cultivation; the Empress Josephine was passionate to the point of obsession. The rose is the sacred attribute of Aphrodite, or Venus, goddess of love, and has always symbolized love and beauty, as well as constancy, passion and purity. 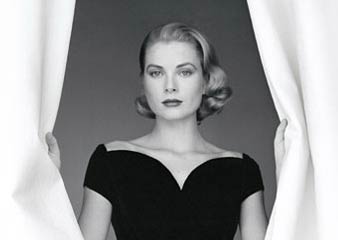 Grace Kelly met H.S.H. Prince Rainier of Monaco at the Cannes Film Festival in 1955. After a whirlwind romance, they were engaged within months and married the following year. Their wedding was the perfect culmination of their fairy-tale romance. Her dress stayed true to her sophisticated style, combining classic lines with an otherworldly beauty, in exquisite silk taffeta and floral lace embroidered with tiny seed pearls, which, combined with the bride’s serenely radiant beauty created an enduring, iconic image, said to have influenced the design of H.R.H The Duchess of Cambridge’s wedding gown.  Princess Grace’s maids of honour held bouquets of tea roses; her headpiece was adorned with orange blossom, the traditional bridal headdress.

Grace Kelly’s unmatched signature style of restrained, effortless glamour was developed through close relationships with her directors and costume designers in the early 1950s. Together they would create captivating yet convincing costumes for her characters which would then translate into her off-screen wardrobe.  In Hitchcock’s ‘To Catch a Thief’ and the unforgettable ‘High Society’ she experimented with a softer, more classical shape, encompassing Greek draping with swathes of pleating, and silk scarves draped loosely around the neck. Her innate sense of low-key elegance, supreme sophistication and confident femininity defined an entire era of classic style and has remained a perennial inspiration.