The new 2012 Porsche Panamera GTS is the purist member of the Porsche Gran Turismo family.

The new 2012 Porsche Panamera GTS has a powerful V8 engine with even more intense responsiveness sits under the bonnet, the sporting chassis has been tuned for added dynamism and agility and the distinctive exterior styling clearly signals these focused intentions. 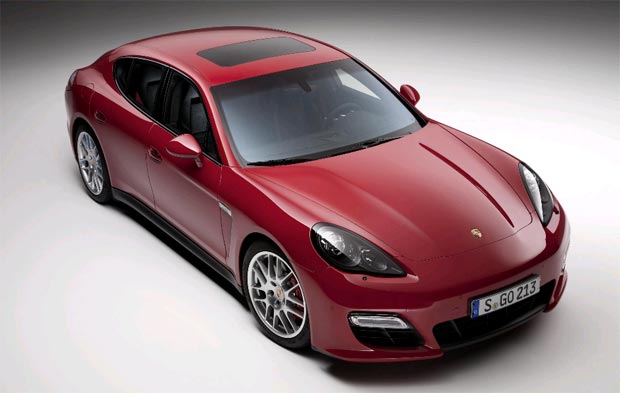 For maximum performance, the muscular V8 drives all four wheels via a seven-speed Porsche Doppelkupplungsgetriebe (PDK) transmission. The four seater 2012 Porsche Panamera GTS has a kerbweight of 1,920kg and can accelerate from 0-62mph in 4.5 secs, and on to a top speed of 179mph. Combined fuel consumption on the NEDC is 25.9mpg, and CO2 emissions are 256g/km.

At the push of a button, driver and passengers can hear the engine of the 2012 Porsche Panamera GTS ‘breathing’; the Sound Symposer directs intake noise into the interior at the push of a button. This is achieved by an acoustic channel picking up the intake vibrations between the throttle valve and air filter. The acoustic channel incorporates a membrane that transmits the vibrations as an engine sound into the A-pillar. A controllable valve located in front of the membrane enables the Sound Symposer to be activated or deactivated by means of the Sport button.

The exhaust gases exit the 2012 Porsche Panamera GTS through the standard sports exhaust system, which comes with larger pipe diameters to reduce back pressure. This also contributes to the increased engine output: the sports exhaust system features two tuning flaps, which expose additional exhaust openings, thereby emitting an even more powerful sound. The flaps are controlled by means of a switch in the centre console, which features a “last mode” function that remembers the last setting and restores it when the engine is started.

With the air suspension at its normal level the 2012 Porsche Panamera GTS sits 10 mm lower than the other models in the Panamera range and its damping is designed to be tauter, reinforcing the sporting personality. Dynamic performance is further enhanced by the combination of 19-inch diameter Panamera Turbo wheels, 5 mm rear wheel spacers and larger brake discs from the Turbo – recognisable by their red brake callipers. 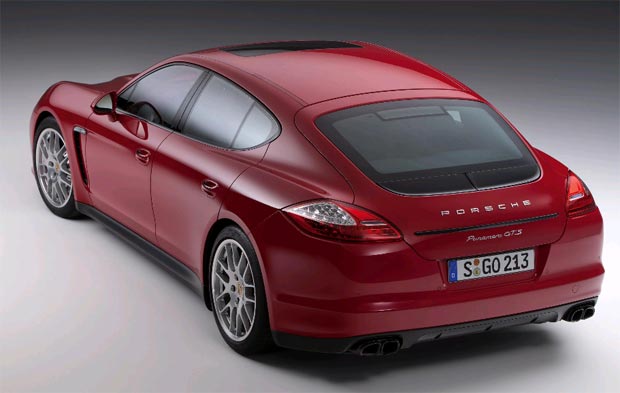 Identified by its large air intake openings, the 2012 Porsche Panamera GTS features the standard front section of the Sport-Design package of the Panamera Turbo which emphasises the sporting character as well as ensuring the air supply for the engine. This sense of purpose is matched at the rear by the adaptive four-way rear spoiler from the Panamera Turbo. At speeds above 127 mph it generates downforce on the rear axle, thereby ensuring stable driving safety at high speeds.

The appearance of the 2012 Porsche Panamera GTS is characterised by numerous black exterior styling details. The high-gloss black exterior package comprises the side window trim, the decorative trim on the rear lid, the headlight washer unit cover, the rear diffuser and the side air outlet panels, lends a particular sporting touch. In combination with the black side skirts, the tail end and the matt black tailpipes of the sports exhaust system the result is clear-cut and striking.

A further point of differentiation is Bi-Xenon headlights with black inner bezels. These feature four LED daytime running lights each, which – as with the Panamera Turbo – are located in the main headlight for a distinctive look. The optional body colour of Carmine Red, available exclusively for the 2012 Porsche Panamera GTS, emphasises the overall sportiness of the model and provides an ideal contrast with the black exterior accessories.

The 2012 Porsche Panamera GTS behind the wheel

An ambience of leather and Alcantara – with a choice of five interior colours – ensures the personality of the 2012 Porsche Panamera GTS is expressed throughout the interior. The centre panels of the adaptive 18-way adjustable sports seats, the upper sections of the door armrests and front centre console armrest and roof lining are in Alcantara.

Furthermore, the agility of the 2012 Porsche Panamera GTS is made apparent via the lateral and longitudinal acceleration display in front of the driver. The display on the right hand side of the instrument cluster – and on the Porsche Communication Management (PCM) system – relays information  regarding the instantaneous acceleration, thereby reflecting the potential of the driving performance of the 2012 Porsche Panamera GTS.

Porsche has put together special optional equipment packages married with a black interior, exclusively for the 2012 Porsche Panamera GTS. The decorative stitching on the foot mats, top of the dashboard, upper edge of the door, armrest, door trim and centre console, the door closing handle along with the seat stitching are executed in Carmine Red or GT Silver. The embroidered ‘GTS’ lettering on the headrests, and seat belts also in the corresponding colour, complete the overall impression.

The 2012 Porsche Panamera GTS will be on sale in the UK from February 2012, priced from £90,409. Every Panamera, including the new 2012 Porsche Panamera GTS, has a high level of standard specification that includes front and rear ParkAssist, Porsche Communication Management with touch-screen satellite navigation and audio controls, cruise control and a three year warranty.