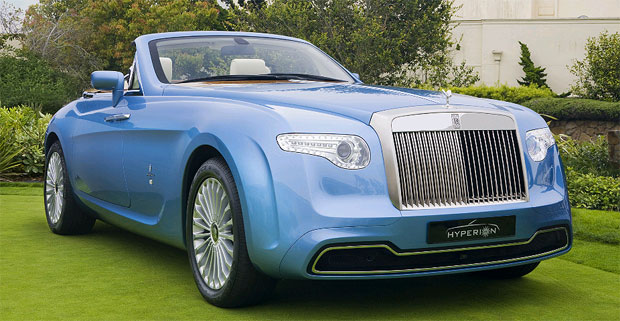 The Pininfarina Hyperion Car made its debut in the Emirates on the occasion of the Dubai International Motor Show 2011, Region’s largest and most influential automotive event.

The luxury Pininfarina Hyperion Car will be on display on the Raxan Management stand of Alexander Pushlin, current owner of the Hyperion.

The Pininfarina Hyperion Car is an opulent two-seater roadster, that takes up the legacy of other Rolls-Royces designed by Pininfarina, the Silver Dawn saloon of 1951, for example, or the Camargue coupe of 1975. The car is named after Hyperion, one of the Titans of Greek mythology, to underline its architectural and figurative power.

Pininfarina was born to create custom-built cars and continues to dedicate resources and talented people to realize unique models for individual clients. The exceptional skill of Pininfarina designers to interpret the clients’ dreams, together with the application of innovative technologies and the historic craftsmanship skills of its technicians, have created cars worthy of legend. Besides the Pininfarina Hyperion Car the most recent unique cars designed and manufactured by Pininfarina are the Ferrari P4/5 of collector Jim Glickenhaus, the Ferrari Scaglietti “K” of Peter Kalikow and the New Stratos of Michael Stoschek. 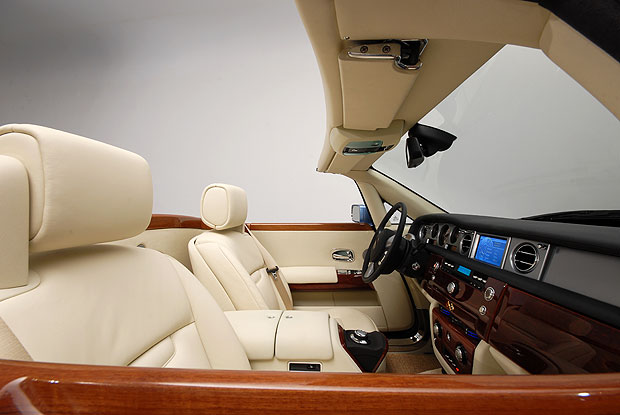 As for the Pininfarina Hyperion Car the idea of the project was to create a custom-built vehicle that would evoke the appeal of the sumptuous cars of the 1930s, with their majestic, regal bonnets, and a body that surrounded the driver and a single passenger.

The result was a one-off firmly rooted in the values of the Pininfarina and Rolls-Royce brands, with lines and dimensions that are hard to find in a 21st century model. Structurally, Pininfarina moved the driving position further back (400 mm) and took out the rear seats. A new hood was designed and craftsmanly built for the Pininfarina Hyperion Car which folds behind the seats under a wood-lined cover. In front of the windscreen two compartments were created for small items or for sports equipment.

To repeat the proportions of the unforgettable cars of the pre-war period (a short tail end and majestic bonnet that “surges” forward), the manufacturers had to completely redesign the packaging of the Pininfarina Hyperion Car. To balance the volumes, the Pininfarina designers tried to achieve soft, fluidly flowing surfaces. The front of the Pininfarina Hyperion Car reminds of the classic Rolls-Royce grille, which has been slightly inclined. An upper trapezoid part aerodynamically links to the engine hood and to the very inclined windscreen, while the recessed Bixenon headlights and LED technology convey sportiness, elegance and the technological value of the Pininfarina Hyperion Car. The spectacular bonnet is underlined by the muscular, taut wings, while the line that embraces the front wheels is drawn back until it disappears into the hood cover, giving a sense of movement even when the car is stationary. This feature is counterbalanced by a small rib under the door that runs towards the rear wheel. The shape of the rear end recalls Pininfarina’s legendary sports “berlinettas” of the Fifties and Sixties, with their cut-off tails, strongly inclined downwards, with a flat closure borrowed from boat-building.

Small but precious modifications have been made to the interiors, maintaining the perfect sense of high luxury in the passenger compartment that distinguished the original car. One precious detail of the instrumentation underlines the unique environment: the watch designed specifically for the Pininfarina Hyperion Car by Girard-Perregaux, which can be removed from the dash and attached to a bracelet to be worn on the wrist.

Combining the excellence of a watch and a car that are out of the ordinary. This was the goal of the collaboration between Pininfarina and luxury Swiss watchmakers Girard-Perregaux. The meeting of two prestigious names that embody artisan tradition and cutting edge technology has created a refined timepiece with a sophisticated mechanism. Girard-Perregaux have personalised one of their

sophisticated watches, the Vintage 1945 Tourbillion with gold bridge, for the Hyperion. Thanks to an ingenious anchorage system, this timepiece can be mounted on the car’s dashboard, or removed from its mount to slip on to its owner’s wrist.

The pure lines of the white gold case, inspired by a model of 1945, contain a gold bridge tourbillon. This mechanism, which is faithful to the original design created by Constant Girard-Perregaux in the 19th century, stands out for its complexity: only an expert watchmaker could assemble the cage that weighs just 0.3 grams, carrying no fewer than 72 elements. The automatic movement was painstakingly built by the company. 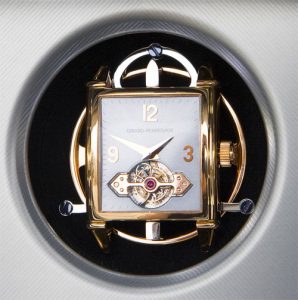 The Vintage 1945 Tourbillion with gold bridge blends perfectly with the Pininfarina Hyperion, starting from the colours of the face which match those of the bodywork. A sophisticated “spring-ball” system allows it to be extracted from the leather bracelet so that it can be mounted on the dashboard in a support in the shape of a whirlwind, or tourbillon, the hallmark of the Girard-Perregaux brand. This unique piece suggests the link between the worlds of prestige cars and outstanding watch-making. Cult objects that transcend their function to arouse emotions that are constantly renewed. Pininfarina and Girard-Perregaux: outstanding watches and cars share numerous common denominators: the notion of time, a fundamental factor of motor racing; increasingly refined techniques; and ever-present passion. In these two worlds, admiration for historical models goes hand in hand with the appeal of the most recent performances; the classic design shares the stage with daring concepts; cutting-edge technologies and noble materials are the key words of every successful innovation. High standards of quality, beauty, power and perfection even in the smallest detail, are essential components.

Girard-Perregaux bases its relationship with Pininfarina on a common conceptual approach, underpinned by a striving for excellence, emotions and beauty. And when passion encounters technical capabilities, the dream takes shape, producing the most refined mechanical structures.

The Pininfarina Hyperion Car vehicle bodywork was fully made of carbon fibre, ensuring geometrical accuracy, high rigidity and unexpected lightness, while the internal and external wooden finishing details remind of boating in the choice of essences and the tradition of execution. The doors were in fact made of fine solid wood by craftsmen through technologies used to create components for luxury boats. This is another aspect of the programme of Pininfarina special cars: offering customers unique stylistic and technical solutions that are not possible on mass produced cars.

The Pininfarina Hyperion Car can be viewed at the Dubai International Motor Show in the second week of November.