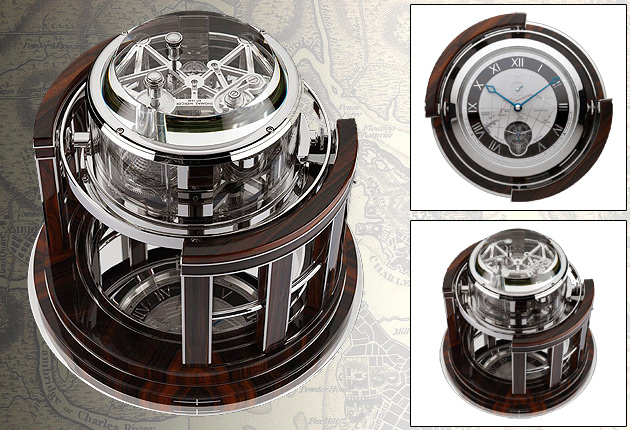 After 150 years of excellence, London based Thomas Mercer continues to excite and innovate. Their latest offering is the limited edition marine chronometer titled ‘Shackleton Epic’.

The Legacy Shackleton Epic, is available in a limited edition run of just 25 pieces. The chronometer celebrates Sir Ernest Shackleton’s famous 1916 voyage of survival and the official centenary re-enactment led by Tim Jarvis. The rhodium plated dial, obtained through a bas-relief process, features a map of the Southern Ocean and their hazardous voyages, which were successfully navigated through the accuracy a Thomas Mercer chronometer.

The Thomas Mercer ‘Shackleton Epic’ combines precision engineering and mechanical perfection with superb design and innovation. The case displays a distinctive asymmetrical body of AISI 316 stainless steel, with precious elements in high gloss finish Ziricote adorned with fine metal settings – making this timepiece an incomparable fusion of advanced machining techniques and the finest cabinet making. Authentically Innovative: while retaining the classic elements of the pure marine chronometer, the TM0801 movement is a completely new design project. Characterised by a symmetrical layout and skeletonised plates, the detent escapement – traditionally on the back plate – has now been moved so as to be visible through a dial aperture. Exquisite from every angle: the gimbals suspension allows the movement to remain horizontal regardless of the motion of the ship, and allows the mechanism to be rotated to further reveal the exquisite craftsmanship and innovative design of the timepiece.

As a further touch of incomparability, the signatures of the Hon. Alexandra Shackleton and Tim Jarvis AM FRGS, respectively patron and leader of the centenary expedition, are etched into the reflective surface of the base.

Thomas Mercer was established in London in 1858 and throughout its 150+ years of history stood as leading name in marine chronometers. Besides the distinction of being appointed Maker to the Admiralty following the several successes at the Greenwich Trials, Thomas Mercer also made the chronometer that in 1915 Sir Ernest Shackleton carried under his jerkin during the James Caird voyage (the 800-mile, open-sea epic journey that enabled the crew of the Endurance Expedition to survive), now on permanent exhibition at the National Maritime Museum of Greenwich. The top end of production featured clocks and chronometers made for the Royal Family, including the marine chronometers that equipped the Cunard Queen Mary.