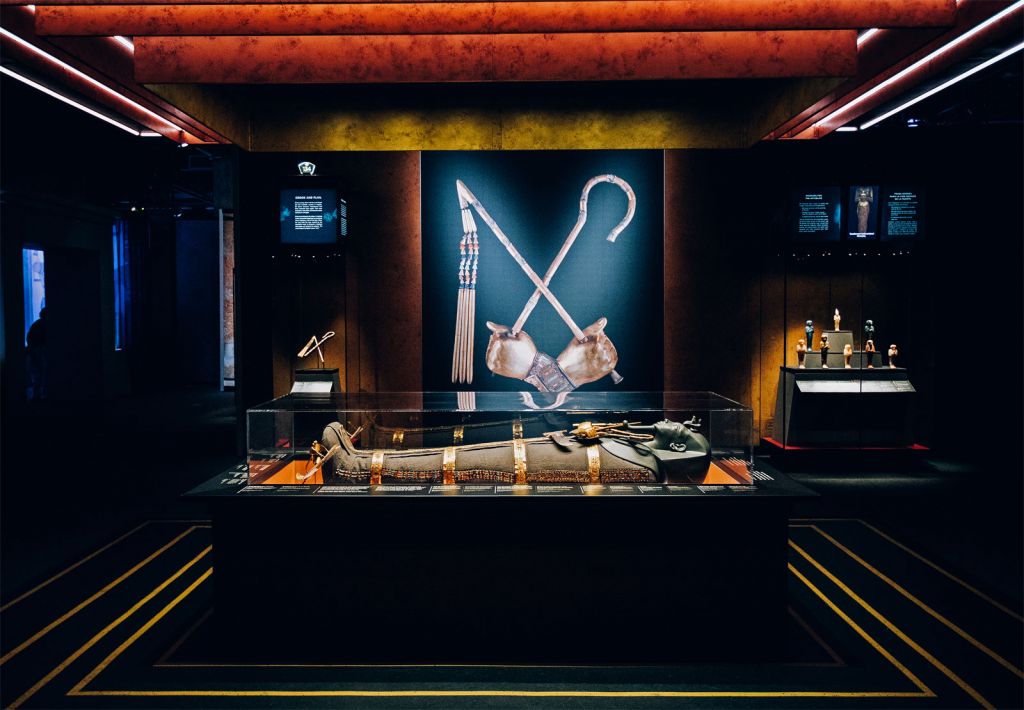 Gina Baksa pays homage to the most famous Egyptian Pharaoh of them all, during her visit to the Tutankhamun: Treasures of the Golden Pharaoh Exhibition at the iconic Saatchi Gallery.

The discovery of King Tutankhamun’s tomb near Luxor in November 1922 became one of the world’s most legendary archaeological finds. It launched the Egyptian Boy King into global superstardom. Leading the expedition, eminent Egyptologist Howard Carter, and funded by British aristocrat Lord Carnarvon, was on his last dig in the Valley of the Kings. Time and money were running out.

At the final hour, the duo struck gold when they discovered the tomb and Carter uttered the immortal words: “Yes, wonderful things!” in response to his benefactor asking him what he could see behind the chink in the chamber doors.

The twelfth king of Ancient Egypt’s 18th Dynasty was just 19 when he died. Originally thought to have been murdered, recent scans of his mummy suggest that he may have had malaria. The small size and irregular shape of Tutankhamun’s tomb suggests that he passed away well before his own tomb was ready. Crammed full of priceless ancient artefacts, including the solid gold funeral mask that became the Boy King’s iconic emblem, it took Carter ten years to clear the chamber and catalogue each piece, most of which are still housed at the Egyptian Museum in Cairo.

Fast forward to 2020 and King Tut’s rich legacy is currently on a world tour with over 150 authentic tomb objects now on show at London’s Saatchi Gallery, many on their first journey outside of Egypt.

You won’t get to see the spectacular funerary mask that lucky visitors to the 1972 exhibition would have witnessed. However, what we do experience on the London leg of the worldwide tour are breath-taking examples of exquisite craftsmanship in gold, wood, precious stones and metals that were crafted specifically for Tutankhamun’s journey to the afterlife.

I’ve had a compelling fascination with Ancient Egypt that has led me to take groups to visit the temples and pyramids of this amazing country. So, I was excited to spend time among these extraordinary displays of wealth and reverence for the afterlife. The Tutankhamun – Treasures of the Golden Pharaoh Exhibition spreads across several large rooms at the cavernous Saatchi Gallery near Sloane Square.

Each room is suitably atmospheric with subdued lighting and subtle repetitive soundtrack that induces an appropriate dreamlike state. All exhibits, from the amulets and jewellery to the larger furniture (even Tutankhamun’s bed is here), is displayed in beautifully lit glass cases.

Best of all, the exhibition’s curators have thoughtfully allowed plenty of space around each display, thereby providing enough room to move around each case without being jostled by other visitors. Especially if you go, as I did, around 4 pm, I feel reverence for these artefacts that were never meant to see the light of day after the tomb was sealed, let alone be witnessed and enjoyed by human beings some 3,200 years after they were sealed in the subterranean chamber in the Valley of the Kings.