Positioned as the ultimate Toyota Land Cruiser, the 2012 Land Cruiser V8 has never wanted for much in terms of quality, performance, luxury and unmissable road presence.

That formidable combination notwithstanding, the newly unveiled 2012 Land Cruiser V8 model goes even further in terms of sharper design inside and out, more creature comforts and advanced handling technologies for exceptional off-road capabilities. Making its debut this week at the Brussels motor show, the 2012 Land Cruiser V8 will go on sale in the UK in March. More details of the UK range will be announced nearer the time of launch. 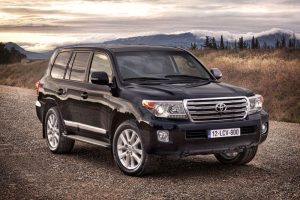 It is at the front of the vehicle that the external styling changes on the 2012 Land Cruiser V8 are most evident, led by a new over-size bumper with integrated fog lights and a new grille that pairs chrome and silver-finished vertical bars across its width. In spite of the bumper’s large dimensions, the sharply trimmed lower section ensures the extent of the front overhang does not compromise the approach angle when driving off-road. The 2012 Land Cruiser V8 headlamp units have been reconfigured, incorporating LED daytime running lights and cylindrical high and low beam High Intensity Discharge bi-xenon headlights. The turn indicators extend outwards, increasing their visibility to the side. In profile, the foreshortening effect of the lower sections of new front and rear bumpers is clear to see, while the 2012 Land Cruiser V8’s built-in toughness is reflected in thick new side protection mouldings with chrome detailing. The door mirrors have been revised, too, now incorporating LED turn indicators and side view cameras linked to the new Multi-Terrain Monitor (see below).

New-design 20-inch alloy wheels are also introduced for 2012. At the rear the combination light clusters have been redesigned with a new double-cylinder form that echoes the look of the new headlamp units. The turn indicators are more prominent and the reversing lights are relocated to be on a level with the licence plate trim. As with the daytime running lights and door mirror turn indicators, power-saving LEDs are used for the rear lights, which have the added benefit of lighting up more quickly than conventional filament bulbs.

The interior of the 2012 Land Cruiser V8
Changes made to the 2012 Land Cruiser V8’s cabin focus on raising the level of perceived quality in the look and feel of the interior, improving the quality and comfort and designing, in better ergonomics and functionality for the controls and switchgear. A new, lighter interior colour scheme will be available, matched with high-gloss wood grain trim elements and bright silver-finish details. Extensive changes have been made to the dashboard layout, including the introduction of a new audio panel, a piano black paint finish for some elements with bright silver-finish trim and chrome-plated details on the switchgear and air vents. The driver’s instrument binnacle has white Optitron dials that are backlit with blue illumination and a large, colour TFT multi-information display. The front seats, upholstered in perforated leather, gain a cool air function in addition to built-in heaters, plus a position memory setting. Active headrests are also introduced to help prevent whiplash injury in a rear-end collision. In the rear the 40:20:40 seats have a new manual sliding mechanism allowing each section to be moved through a 90mm range. The outer seat headrests have been made larger for extra support and comfort, and the centre seat can be folded forward to create an armrest. 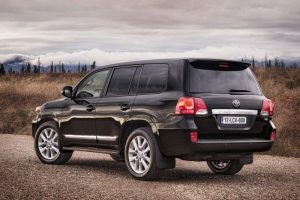 Uprated 4.5-litre V8 turbodiesel engine in the 2012 Land Cruiser V8
Detailed revisions to the 4,461cc V8 turbodiesel engine have ensured emissions comply with Euro 5 standards. These include the introduction of a diesel particulate filter (DPF) and new G3 piezo injectors in the common rail injection system. Injection pressure of 200mPa delivers better throttle response as well as reducing emissions. The engine produces 286bhp (200kW) at 3,600rpm and maximum torque of 650Nm between 1,600 and 2,800rpm. The addition of the DPF allows for the main exhaust silencer be reduced in size and weight, improving fuel efficiency and reducing noise and vibration. Noise and vibration levels have also been reduced in a series of detailed engine adjustments and the strategic use of insulation material between the injector system and head cover.

Crawl Control with world-first Turn Assist
Crawl Control can be used when the vehicle transmission is in L4 and speed is below 15mph (25km/h) – on its own or in conjunction with the MTS. It helps the driver to make a slow, controlled descent or climb on steep slopes, or help free the vehicle should it become stranded. The system has been developed so that it now offers a choice of five vehicle speed settings. An independent, switchable Turn Assist function has been added to Crawl Control, which can help drivers execute very tight turns without having to reverse mid-bend. Operating at speeds below 6mph (10km/h), it reacts to the driver’s steering inputs, braking the rear wheel on the same side of the vehicle as the direction of turn. The wheel braking force automatically increases with the steering angle, reducing the vehicle’s turning radius.

Multi-terrain Select
The Multi-terrain Select (MTS) automatically modifies the throttle, braking and traction control to suit off-road conditions and deliver the best possible traction and vehicle control. MTS offers a choice of five terrain modes: Mud and Sand; Loose Rock; Mogul; Rock; and Dirt and Rock. The new Multi-terrain Monitor automatically displays a view of the vehicle’s immediate surroundings on the multi-information screen. In any of the five modes, the centre and rear differentials can be locked to gain maximum traction.

The amazing Multi-terrain Monitor on the 2012 Land Cruiser V8 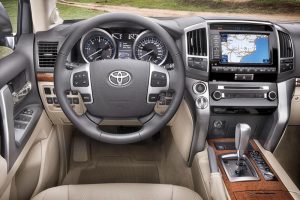 The Multi-terrain Monitor works in conjunction with the MTS, displaying images from four external cameras on the multi-information screen. It gives a comprehensive view of the area immediately around the vehicle when driving off-road (forward or reverse), helping the driver spot and avoid hazards that might otherwise be obscured. The 2012 Land Cruiser V8 cameras are positioned front and rear and on the left and right door mirrors. The display can be adjusted to show single or combined front and/or side views. When the shift lever is moved to reverse, the display automatically switches to the rear view. The 2012 Land Cruiser V8 front camera uses a wide angle lens to show the widest possible forward view, bringing blind spots such as the area immediately in front of the bonnet into sight. The monitor also shows additional front and side view information, including the view range of the cameras and the location of obstacles detected by the clearance sonar. The display also shows the front and rear tyre contact points; guidelines indicating the predicted path of the front tyres; and parallel vehicle width and length lines to help the driver judge distances and avoid obstacles.

Tyre Angle Display
The 2012 Land Cruiser V8 is equipped with a new Tyre Angle Display, which complements the predicted tyre path guidelines presented on the Multi-terrain Monitor. The system can be launched via the multi-information switch when MTS is activated. Guidelines linked to the steering angle are projected in real time on the display; moving through seven steps, they show the driver changes in steering angle between zero and 45 degrees.

Toyota Touch Pro
The 2012 Land Cruiser V8will adopt Toyota Touch Pro, the most sophisticated version of Toyota’s new multimedia and navigation system. Toyota Touch Pro uses a high-resolution, eight-inch touch screen interface with a home screen display showing the most relevant navigation, audio and air conditioning information. With a choice of 20 menu and guidance languages, it provides pan-European navigation, plus a range of advanced features including automatic map zoom at intersections, 3D city modelling and landmark graphics, and an on-line points of interest search function. Using a compatible mobile phone and the on-board Bluetooth, Toyota Touch Pro enables connection to Google Local Search, the world’s largest and most up-to-date search database. Using Google Maps, route destinations can be input remotely from home or office. Points of interest can also be downloaded for entry as destination. The system incorporates a double tuner DAB/DAB+/DMB digital radio, making it compatible with the advanced TPEG (Transport Protocol Expert Group) traffic information system, which has a much greater information capacity than the TMC-RDS analogue system.

Toyota Touch Pro can also read DVD audio and video files.
The pin-point accuracy of the system enables better routing and can supplement a basic traffic event and flow service with information about parking availability and fuel prices in the surrounding area, together with details of speed limits and weather forecasts. Using voice recognition, Toyota Touch Pro allows the driver to use a single command to input a full destination, make a phone call, or pick a specific track from a connected digital music player. It also provides access to text messages and emails and includes a ‘text-to-speech’ message read-out facility. The package is completed by a rear-view camera with dynamic guidelines for easier, safer manoeuvres in confined spaces.Toyota Touch Pro can be combined with a 14-speaker JBL premium sound system with GreenEdge energy efficiency technology that reduces power usage by up to 80 per cent compared to conventional audio units.

New premium specifications for the 2012 Land Cruiser V8
The 2012 Land Cruiser V8’s higher quality feel is supported by a higher level of premium equipment features and options. UK specifications are still to be announced, but the list of items newly available for the model include a heated steering wheel, front seats with cooling and heating functions, a cooled box in the centre console, a powered upper tailgate section, bi-xenon headlamps and a 200V power outlet in the luggage compartment.