Each hotel in Dorchester Collection offers unique and memorable dining experiences with many of the restaurants holding numerous awards and accolades between them. Alain Ducasse at The Dorchester, Restaurant Le Meurice and Alain Ducasse au Plaza Athénée have each been awarded three Michelin stars, providing the company with as many stars as it has hotels. 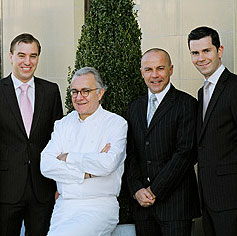 Located in the heart of Mayfair, Alain Ducasse at The Dorchester offers contemporary French cuisine in a sophisticated environment, with professional and friendly service overseen by restaurant director Nicolas Defremont. Executive chef Jocelyn Herland interprets Alain Ducasse’s cuisine with a refined approach, consistently championing current seasonal produce, much of which is sourced from British suppliers. Opened on 13 November 2007, Alain Ducasse at The Dorchester was named Best Newcomer by the 2009 Zagat guide and was first awarded three Michelin stars in January 2010.

The dining room is decorated with light oak panelling and leather in shades of tan and cream, creating a light and vibrant ambience. The contemporary design also offers quirky elements, including lacquer walls studded with green silk buttons, that draw inspiration from leafy Hyde Park, just opposite.  An ideal venue for a business lunch, the restaurant offers a three-course set menu (£55 including two glasses of wine), which can be fully enjoyed in under an hour. There are three options for private dining ranging from the stunning Table Lumière, (up to six guests, enclosed in a luminescent oval curtain with 4,500 shimmering fibre optics dropped dramatically from the ceiling), to the Salon Park Lane which accommodates a maximum of 28 guests and the Salon Privé, for up to 10 guests. 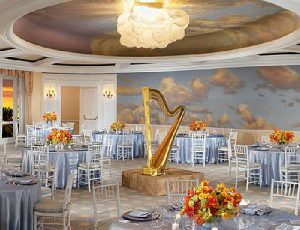 The Polo Lounge at The Beverly Hills Hotel, which this year celebrates its centenary, has been the favourite breakfast spot and watering hole for generations of stars and Hollywood deal-makers, with three separate dining areas to meet the needs of every guest. Diners can enjoy indoor or outdoor dining for breakfast, lunch, dinner and late-night suppers, as well as taste one of The Polo Lounge’s many signature cocktails and favourites such as the McCarthy Salad, named after the famous polo player, Neil McCarthy.

The Patio is very popular during sunny days and warm evenings – common in Southern California almost year-round – and is a charming environment for al fresco dining; it is well known for its spectacular Sunday brunch where guests are entertained by a light jazz trio, surrounded by tropical foliage.The Polo Lounge was named in 1941 by the then-owners Hernando Courtright, Loretta Young, Irene Dunne and Harry Warner.  The name was chosen in honour of polo players Will Rogers, Darryl Zanuck and Tommy Hitchcock who frequented the hotel following their polo matches and stored their silver trophy bowls there. 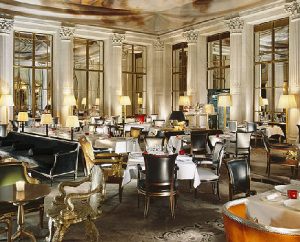 A new concept of tableware called Ondes©, designed by Alléno himself, adds interest to  dining at Le Meurice, as well as a Champagne bar and a refrigerated wine cellar open to the dining room containing 616 bottles, the oldest of which is a Château Cos D’Estournel 1928 Saint Estèphe. Guests also have the opportunity to dine at the Chef’s table, located in the hub of Alléno’s kitchen. Restaurant Le Meurice’s 17th century “grand siècle” style is based on three paintings dating from 1905 to 1907. Behind its majestic gilded glass door, are hidden ancient mirrors, chandeliers as well as bronze and marble frescoes, and its grand windows overlooking the Tuileries Gardens opposite. 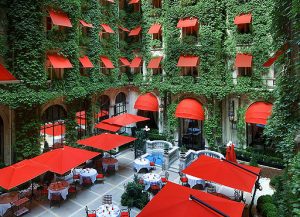 The décor is integral to Ducasse’s philosophy. Pierre Tachon, responsible for the visual identity of Ducasse restaurants, has designed both the tableware and the graphics to embody the spirit of the restaurant where contemporary design blends with traditional craftsmanship. Each piece of ‘Art de la Table’ – the signature ‘Volute’ plates at each place setting, silver-gilt cutlery and delicate celadon green plates – play a fundamental part in enhancing the novel gastronomic experience. Alain Ducasse au Plaza Athénée is overseen by executive chef Christophe Saintagne and restaurant manager Denis Courtiade (awarded ‘Top Prize for Hospitality 2010’ by the International Academy of Gastronomy). 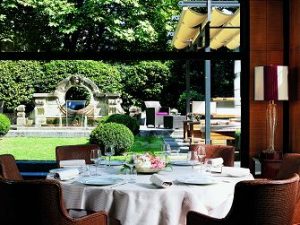 Acanto at Hotel Principe di Savoia offers guests the quintessential Milanese dining experience, thanks to the culinary creativity of executive chef Fabrizio Cadei. The menu, made up of classic Italian cuisine, derives from the regional culinary tradition of Lombardy.

Designer Paul Valet has installed at Acanto (for the first time in Italy) a state-of-the-art show-kitchen with the latest high-tech equipment and glass panelling, enabling guests to observe the chefs at work. The chefs, in turn, are inspired by live screenings from La Scala, which are broadcast on the kitchen’s television. The veranda and restaurant are entirely integrated, offering both a stylish restaurant and a beautiful summer courtyard in which to enjoy cocktails. The architecture of the veranda, conceived by Celeste Dell’Anna, enhances the view through to the Italian landscaped garden and 18th century fountain. 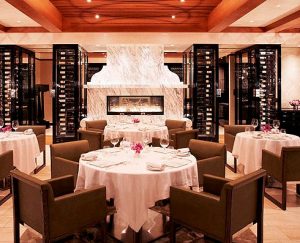 The dining room at Hotel Bel-Air is overseen by world-renowned chef Wolfgang Puck and the Wolfgang Puck Fine Dining Group. Puck’s carefully created menus feature modern Californian with European and Mediterranean influences and reflect the healthy California lifestyle, as well as showcasing the best of its local, fresh ingredients. Meticulously redesigned by architect and design firm Rockwell Group, Wolfgang Puck at Hotel Bel-Air embodies the glamour of the Golden Age of Hollywood, whilst carefully maintaining the hotel’s signature style and intimate feel.

The restaurant features striking multiple glass wine cellars displaying over 2,400 bottles, the largest of which provides the central focal point and separates the main and private dining rooms. The venue opens directly onto the terrace where guests can make the most of the cocktail bar from the comfort and exclusivity of one of five private alcoves which overlook Swan Lake.

Restaurant Coworth Park
Coworth Park, Ascot
Located in the Mansion House of Dorchester Collection’s Berkshire country house hotel, Restaurant Coworth Park, the hotel’s fine dining restaurant, under the direction of executive chef Chris Meredith, showcases a modern outlook on classical British dishes and a commitment to quality ingredients and depth of flavour, offered in a contemporary elegant setting. The restaurant has three inter-connecting rooms, the larger of which has floor to ceiling windows overlooking the garden and 240 acres of picturesque parkland. 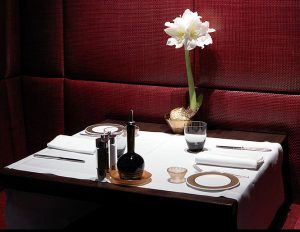 Le Richemond’s signature restaurant, Le Jardin, is a destination restaurant for both visitors to Geneva and locals. The menu at Le Jardin has been created by accomplished Italian chefs, who are constantly inspired by the regional recipes and fresh ingredients of their home country. Open daily for lunch and dinner, Le Jardin is a stylish Italian restaurant with an inventive menu that features mouthwatering antipasti, delicious fish, meat and pasta dishes, as well as a selection of ‘Le Richemond classiques’. The restaurant also offers a weekday business lunch and a seasonal four-course menu degustation dinner. In addition to the dining room and terrace for alfresco meals, with views across Brunswick Gardens and Lake Geneva, the restaurant has a private dining room for up to 14 guests, which makes it a popular venue for special occasions, from birthday dinners to business lunches.