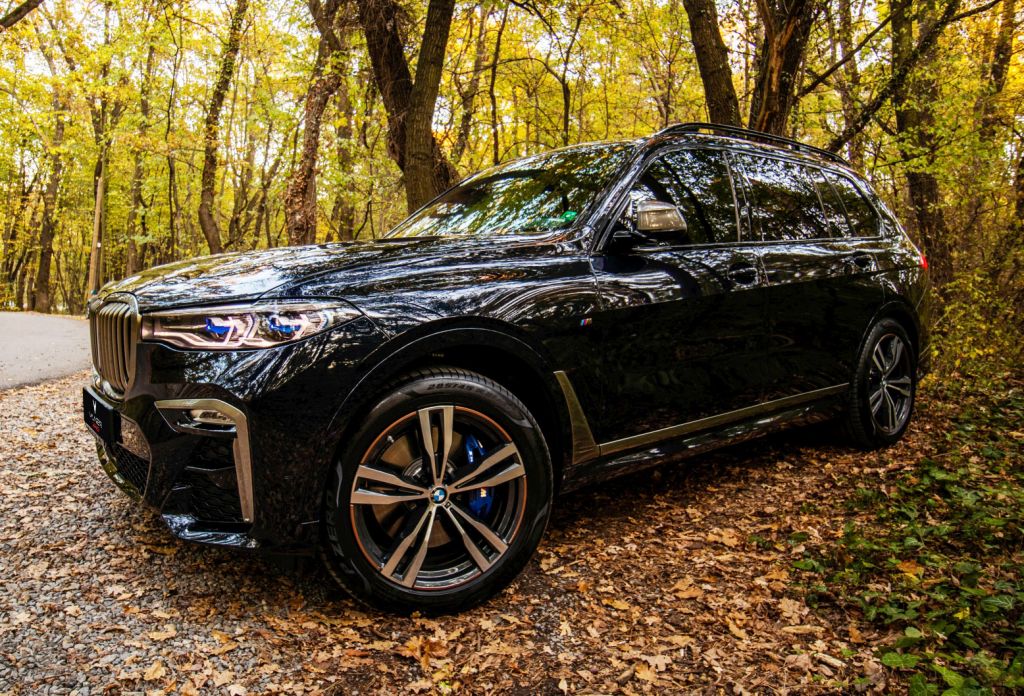 Vilner, the Bulgarian car interior specialists have added their own personal interior design touches to address some of the issues they had with the bare plastic surfaces inside a BMW X7.

“It’s not acceptable to launch a brand flagship with such interior misses,” says Atanas Vilner about the BMW’s new X7. “Especially when the example in question is in the top-spec form of the M50d”.

Vilner Garage, the specialist car interior company and it’s founder Atanas Vilner, had a problem. Not with any current project they were working on, specifically with the BMW X7s interior.

To put it mildly, Vilner was less than thrilled with a number of areas in the X7’s interior. Obvious areas they felt improvements needed to be made was the base of the seats, the second-row panel containing the cup holders, the two USB Type C ports and the dash. They decided to undertake some of their own interior design magic to help the X7 to truly justify its lofty positioning in the market.

“This is the hardest plastic used in any contemporary BMW model, placed in the most visible area. And, it’s found within BMW’s so-called ‘Extended Leather Package’. Also, the base of the seats, the switch panels – your fingers will go there much more often than on top of the dash, right? And when they do touch this hard surface, they’ll be trying not to remind themselves they paid around 120k+ euros on this car.” said Vilner. 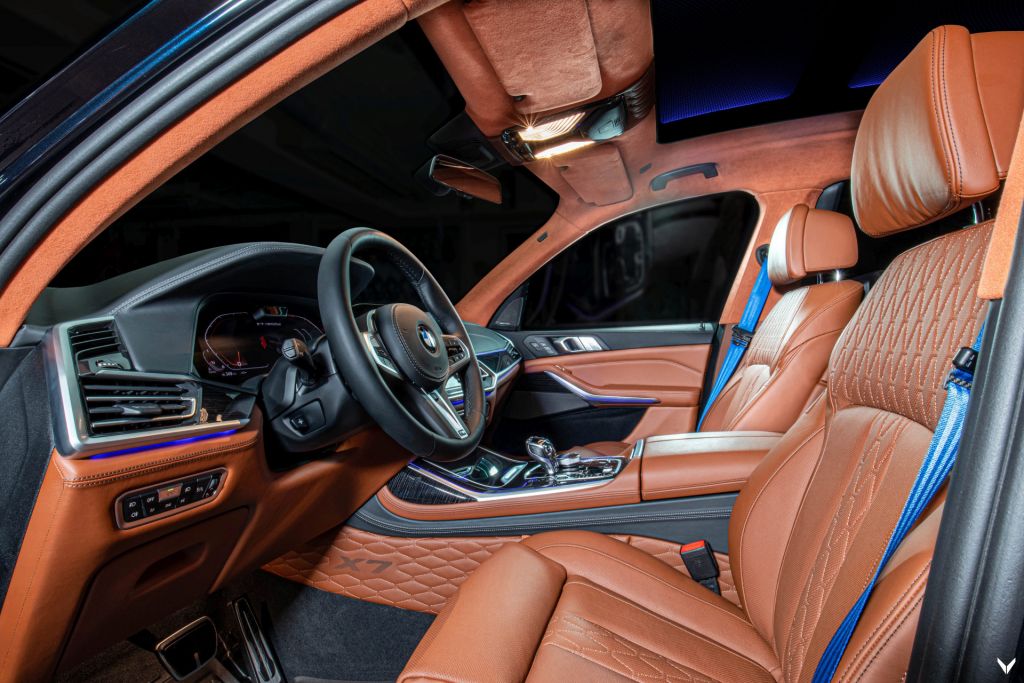 BMW calls its X7 ‘The President’. And to justify this, Vilner Garage wanted to make it worthy of that title with a liberal use leather. By no coincidence, Vilner used the same leather used by the factory. “We’ve managed to source the exact same ‘BMW Individual Merino Tartufo’ from… BMW.” 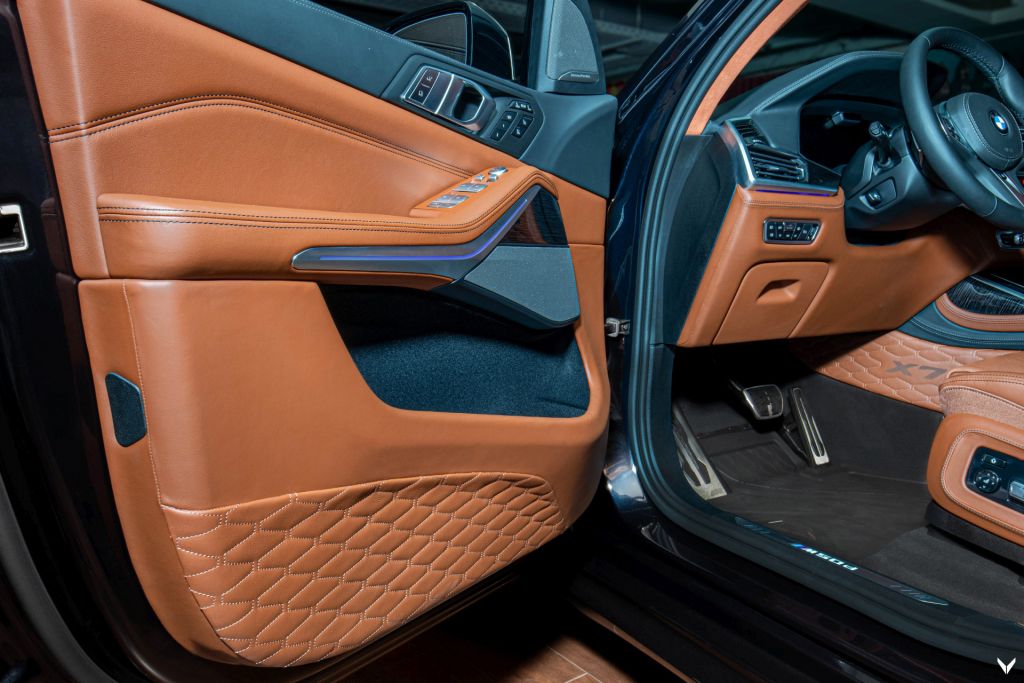 The Vilner craftsmen upholstered the bottom part of the dash and the door panels. You can see the original ‘BMW Individual’ rhomboid seat pattern done by Vilner on the latter, as well on the side of the central tunnel. There’s also incorporated a perforated ‘X7’ logo. Also, the door pockets were flocked, while the steering wheel was kept as shipped.

“We’ve used more than two square meters of leather just for the back of the seats,” says Vilner. 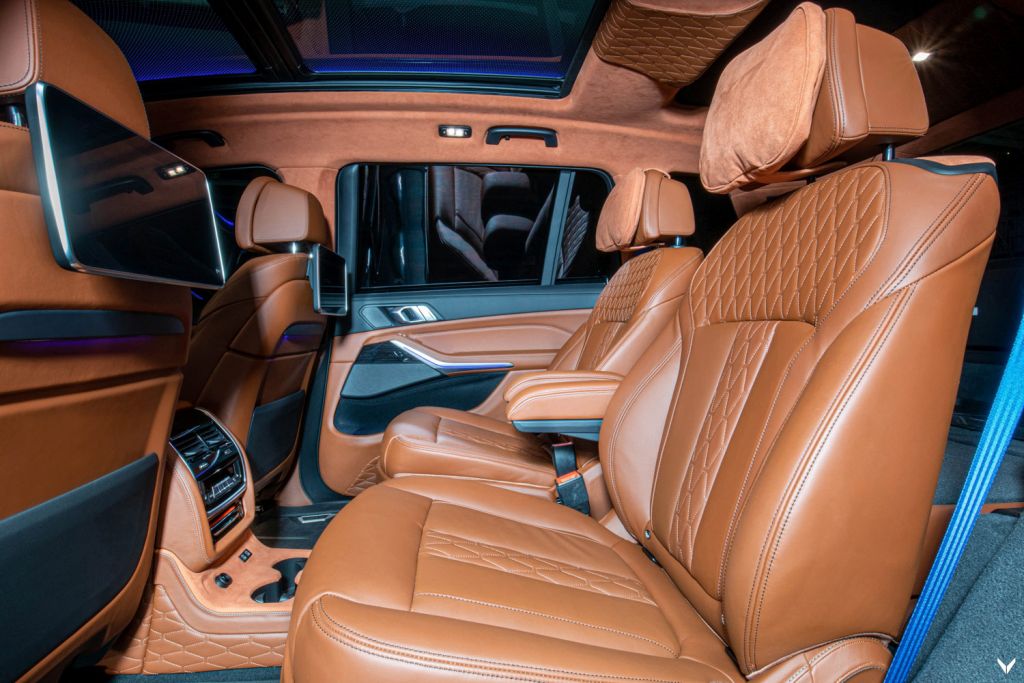 The aforementioned seat’s switch panels, the bottom part of the B-pillars and the climate control console for the 2nd row, were also upholstered with the same original ‘Merino Tartufo’. A Rhomboid pattern was installed around the factory-fitted panoramic glass roof sections along with an original ‘BMW Individual’ motive.

The BMW X7 M50d comes with M Package as standard. Which means a ‘BMW Individual Alcantara Anthracite’ headliner is included. Vilner reupholstered this black section completely – with a much warmer ‘Tartufo’ coloured Alcantara.

They also included the A, B and C-pillars, and even the upper parts of the boot in the improvements. The same light brown Alcantara can now also be found in the second row’s cup holder/USB panel. Perforated ‘X7’ logos are also present there, as well on the Vilner reupholstered rear seats headrest’s pillows.

Vilner has also added some touched to the exterior of the X7. These include the brown rings painted on the 21-inch ‘Style 754 M’ wheels, and if you look closely, you’ll see also the 3D effect X7 logo foil-wrapped taillights.

“The X7 catalogue states: ‘The BMW Individual Extender Leather Trim ‘Merino’ in Tartufo has a flawless quality”. Vilner commented “If this was indeed the case, the word flawless is miss-placed. Don’t get me wrong; the BMW X7 is both a super luxurious and highly technological vehicle. And the majority of people will never notice the minor interior flaws we addressed. But, that’s why we exist – to perfect those flaws for those who care”.

Vilner – Where and how?

Read more articles on motoring in our dedicated section here.