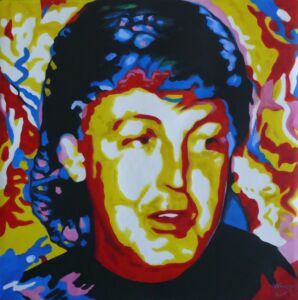 Vladimir Gorsky (1953-2008)
This is one of the extremely rare Vladimir Gorsky Acrylic paintings on Canvas.
This stunning piece of art is privately owned by our very own Paul Godbold, founder of Luxurious Magazine.
Vladimir Gorsky was born in Russia in 1953 before emigrating to America.

The following is a quote from Fine Art Magazine:
Vladimir Gorsky is an unusual talent. Classically trained in techniques defined by the old masters, his art covers themes derived from the Renaissance to the Classics and portraiture brought up to date in an aspect of Pop Art that has been influenced by Andy Warhol.

The following is the Bio of Vladmir Gorsky from gorskyfineart.com
Vladimir was born in Moscow in 1953. He immigrated to the United States in 1987 where he has continued his career as a professional artist. His art graces the walls of Heads of State, Private Collectors and Art Galleries around the world. The portfolio he has amassed ranges from imaginative Russian fairy tale series to miniature gold-leafed portraits on small wooden eggs. Special projects include “From the Depth of 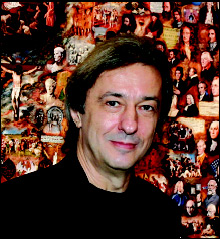 Ages” depicting historical artwork from stone tablets to the Mona Lisa. The most spectacular of his masterpieces is his painting “Tapestry of the Centuries” representing 2,000 years of world history. The original canvas measuring 9′ x 18′ took 3 years to paint and comprises 350 people and events that shaped the history of the world. This painting has achieved International acclaim.

The historical painting of Las Vegas , 7 1/2′ x 12 1/2′, called “Miracle of the Desert” is also a testament to his celebrated talent as a master artist. Vladimir ‘s collection of Pop Art Celebrity Portraits of musicians, Hollywood idols, world famous icons and entertainers captures the essence of the 20th century in a vibrant and bold style that is modern yet timeless.

How much are vladimir gorsky paintings worth on the open market?
You can get an idea by visiting the following link: http://www.artbrokerage.com/artist/Vladimir-Gorsky