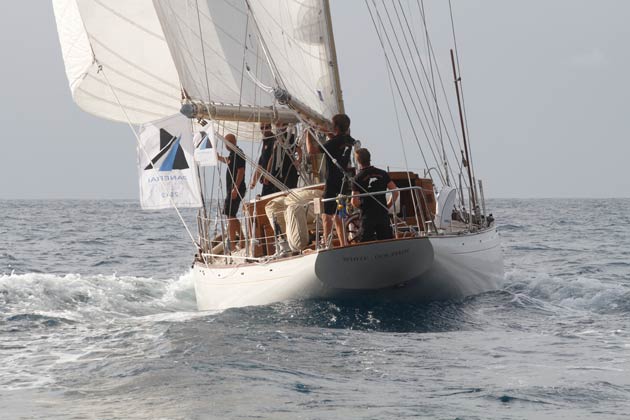 White Dolphin claimed victory in the Panerai Transat Classique 2012, the spectacular transatlantic race for classic and vintage yachts organised by the Atlantic Yacht Club and sponsored by Officine Panerai.

As her prize, the 1967 Marconi ketch took home the Luminor 1950 Rattrapante 8 Days Titanio – 47mm, a Special Edition timepiece created specifically by Panerai for the event, and which features the Transat Classique logo on its case-back.  Having started from Cascais (in Portugal) at exactly midday on December 2nd, White Dolphin sailed into Barbados three weeks later at 15.49 December 23rd ahead of Corto. The latter sloop herself passed out the oldest member of the fleet, The Blue Peter (1930), which finished third. 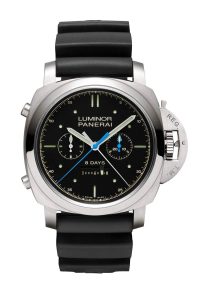 White Dolphin follows in the footsteps of Stiren, winner of the previous race in 2008, and adds another chapter to the legend that is the Panerai Transat Classique. She ran a perfect race and finished first in real time on the leg between Saint-Tropez and Cascais, and in the main event from Cascais to Barbados. These victories owe much to the ketch’s magnificent lines — she was built in 1967 at the Beltrami shipyard and finished at the Sangermani yard, both in Italy — but also to the skill, determination, and enthusiasm of her crew. Led by Pascal Stefani, the owner, and Yann Delplace, the skipper, Fred, Nicolas, Jean-Fabrice, Arnaud and Jordan demonstrated a spirit of solidarity and ingeniousness as they battled with the technical problems that characterised their passage — engine and generator problems, torn spinnaker, and a broken boom track. But they also enjoyed some memorable moments with unforgettable night watches, thrilling surfing, as well as spectacular sunsets.

What marked Pascal Stefani the most was the difficulty of the challenge: “We had our racing heads on throughout the race, first to catch up and overtake The Blue Peter and then to hold on to our lead. We also had to ward off the attacks by Corto and Persephone, the two rivals threatening us in corrected time. Our best option was to head directly south, going east around the Canaries. There, we found some wind while our opponents were stuck in light airs. But even if it was a significant moment, we still had a lot to do to win the race.”

For the final leg of the race, between Cascais and Barbados, the wind blew mostly in the right direction, but the crews nevertheless put up with tiring choppy seas. The most affected were the smaller boats in the fleet: cooking was sometimes impossible and sleeping was almost a gymnastic experience.

Juliette Petres, on Cipango, remembers only too well: “The three guys on board are heavyweights and easily wedged themselves into their bunks. Whereas I’m much lighter and couldn’t stop rolling from one side to the other.”

But despite the discomfort, everyone agreed that it was a magnificent adventure, especially Pascal Stefani, owner of White Dolphin and outright winner of the Panerai Transat Classique 2012.

After receiving his Panerai watch engraved with the race logo, Pascal had this message for the organisers: “We all had the same dream. Thanks for helping us make it come true.” 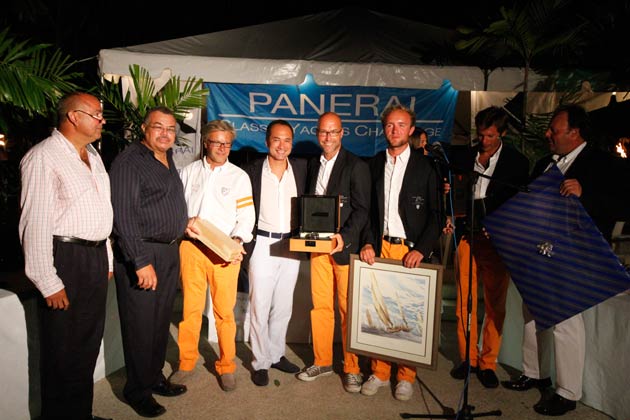 During the prize-giving ceremony, which was held in the superb setting of the Beach House decorated in the Panerai colours for the occasion, the atmosphere was particularly emotional. Those present were extremely touched by the very visible nervousness of Elizabeth and Matthew Kelman, 7 and 6 years old respectively, as they collected their special prize. The good-humoured competitiveness of the sailors was also on display, especially in the case of two crews who fought a veritable race-within-a-race. Gérald Ravache, the young proprietor of Gimcrack, presented Maurice Benzaquen, owner of Cipango, with a piece of the spinnaker halyard and snap hook that gave way during the latter stages of the race to deprive them of any hope of crossing the line before their closest rival. This offering was also a symbol of how the crews pushed their steeds hard but always in full knowledge of their limits.

For some of the competitors, a new voyage begins as they set sail for the Grenadines, while others head for Martinique. For The Blue Peter, the future is the Caribbean racing season which starts on 21 January with the Barbados Round the Island Race. 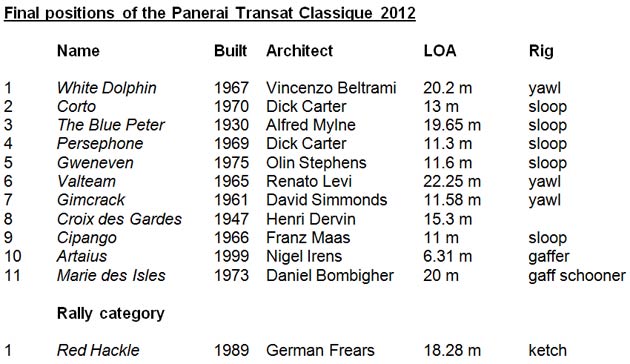