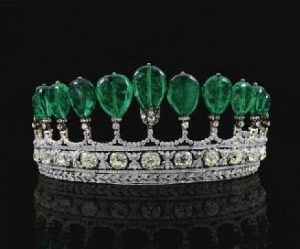 On the 17th May 2011, Sothebys Geneva sold the most important emerald and diamond tiara to have appeared at auction in over 30 years for $12,736,927, a world record price for a tiara at auction. There were Six bidders competing for the magnificent and extremely rare emerald and diamond tiara, circa 1900, which was formerly in the Collection of Princess Katharina Henckel von Donnersmarck the final price also represented a world record price for a piece of emerald jewellery at auction.

A magnificent and rare emerald and dimaond tiara, formerly in the collection of Princess Katharina Henckel Von Donnersmarck, Circa 1900.

Formed as a crown of foliate and floral inspiration, the base set with a central row of eleven larger cushion-shaped diamonds. Each collet set between pairs of munguets, above a line of luarel leaf motifs and surmounted by festooned ribbons. Pierced and millegrain set throughout with rose and brilliant-cut diamonds, surmount by a row of eleven polished pear-shaped emeralds, totalling approximately 500 Carats, graduated in size from the centre. Each emerald has been drilled and is held in diamond set cusp motifs. The nine largest tipped by rose diamonds mounted on silver and gold.

Commenting on the world record price for the Tiara – David Bennett, Chairman of Sotheby’s Jewellery Department for Europe andthe Middle East, said: ”Sotheby’s was honoured to be able to offer perhaps the grandest piece of jewellery to come tosale in over 30 years and the market responded with enthusiasm. This evening’s results, across the board — in NobleJewels, diamonds, coloured gemstones, and pieces signed by the world’s greatest jewelers – show the extraordinary appetite among connoisseurs for rarity, quality and provenance”