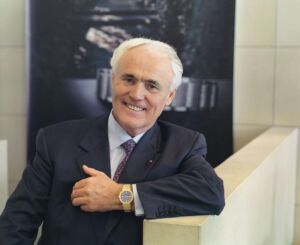 “A worthy descendant of the famous watchmaking dynasty, and currently Chairman of Piaget SA, Yves G. Piaget likes to refer to himself as the “keeper of the temple”.

Born in 1942, Yves G. Piaget hails from La Côte-aux-Fées, the cradle of Piaget watches. He pursued scientific studies, earning a degree in watchmaking engineering from the University of Neuchâtel and graduating as a Gemmologist from the Gemmological Institute of America (GIA) in Los Angeles.

Representing the 4th generation of an illustrious line, Yves G. Piaget has masterminded several innovations that have proved to be landmarks in the history of Piaget, and indeed that of the watch industry as a whole.

In the 60s, the company produced the very first ultra-thin quartz movement, making it possible to craft extremely beautiful Haute Joaillerie watches. This world first was a natural extension of a tradition cultivated by Piaget, already recognised as the specialist of ultra-thin watches.

Subsequently, it further established its technological and creative genius, broadening its renown to reach leadership status in “watch fashion”.

Throughout his career, Yves. G. Piaget has been a tireless traveller who has succeeded in spreading the brand’s fame to the four corners of the earth. While preserving its moderate size that is so conducive to ensuring the personal touch, along with its fundamental Haute Horlogerie philosophy, he gave the company a whole new dimension in 1998 through its merger with the Richemont Group. The firm is now headed by Philippe Léopold-Metzger, Managing Director and Chief Executive Officer of Piaget SA.

Synonymous with “genuine luxury”, the name of Yves G. Piaget is a perpetual source of inspiration the world over. Because he enshrines style, elegance and emotion. Because he is a fascinating individual, driven by a number of passions: for new technologies, for equestrian sports, for the rose that bears his name… And because the very mention of the man appears to invite distinctions. Decorated with the Grande Médaille d’Argent de la Ville de Paris, he was subsequently appointed Commandeur de l’Ordre National de Côte d’Ivoire by President Félix Houphouet-Boigny, before receiving the insignia of an Officier de l’Ordre de St-Charles from the hands of His Serene Highness, Rainier III of Monaco.